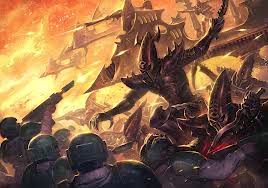 So the dark eldar are pretty much leaked and in any case the codex is out soon and can confirm them if not true.  I don't know what to think.  Its not an amazing update, but sadly wasn't expecting to be one with the latest codex's as examples.  I don't think its an out and out stinker, but its really hard to say how its going to fare and whether it will be able to climb up, or be like tyranids and need serious help in forms of dataslates and formations to make it to the top.

So off the bat wytchs got hit very hard, with nothing to help survivability directly and losing haywire grenades.  There is no AP2 cc weapons in the book so this is another obstacle to overcome.  Dark lance ravagers are bit more expensive, not a lot but may make a difference.  But there is a  lot of points reductions that even this out.  The void raven could be very good, its fragile but has some good damage potential.

Talos and Chronos engines can be in a squadron of 1-3 which is awesome, wracks and grotesques are good, reavers and scourges look to be better.  Razor wing is in fast attack finally. Succubus is better, mandrakes a fucking good finally.

Really there are some good things about the new dark eldar book, and some definite bad.  Will they be good?  I think so.  The biggest thing they will have to overcome is the same issue they have had for a while, dealing with armor.  Wytches are not the unti for this anymore.  But Scourges may be, if the rumored 4 weapons in 5 man squad is true, having two small squads with 4 haywire blasters apiece is a great way to kill vehicles.  I see these being a go to unit.

What I see is an army that is not really universally relying on CC to deal with threats.  They are shooty, and honestly have been for a while so no real big change there, but CC is good for a few units.  Grotesques and talos will do well here, and with working archons court they can potentially too.  Wytches sadly, idk, they may work situationally but they seem to have issues, hopefully someone figures out how to use them.

While DE may lack Ap2 cc weapons, they probably have access to some of the most AP2 shooting, and safest.  So there is your hint, shoot termie equivalents, don't punch them.  Otherwise though they can deal with other cc units pretty well, and can still deal with small 2+ save units like other armies do, drown them in attacks.

There are a lot of naysayers right now, and they may end up being right.  But I see some good here, and I hope there is, as I really want DE to be a good army, maybe not great, but I'll take good, as I think the game needs it.  So we'll see for sure in a few days.

Posted by Grumpy Guardsman at 9:41 PM