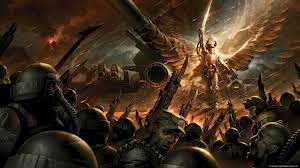 Another codex is out, and marching on to the next.  Again the cries of bland come.  Eh, not really bothering me.  The dark eldar, like the other 7th codexs is a mix of goodish.  Its not bad, its not great.  Its has strong parts of it, it def has weaknesses.  There are some odd decisions.  But you know what there isn't?  A super death machine.
And some people want that, but sadly this is not where 7th is going.  Honestly, if we dropped eldar from the list of armies, the rest can compete and have solid chances of doing well, each having hard counters and being able to counter others, but none having a top, I win every day army.  Are the new books great?  Not really, but whats happening is important.  Its a rebalancing of the game, in a painful but necessary way.

I have to ask a question.  How many new deathstars are there?  The answer, there really isn't.  Yeah thunderwolves add some flavor to bikestars, but effectively little difference, and really not something that is just rocking it either.  Its there, but nothing like a true deathstar.  Even the eldar one has taken a hit.  Will it go, I don't know, I want to say yes though.  With the psychic phase, loss of baron and gruesome trophies changing too, a few other minor shifts, its not as strong as it was a few months ago.  And where are the others?  Bike star is there, but it was never the strongest.  Its tough, but not invincible tough.

So while we have gotten "bland", its what happens when you forget the cheese.  I hope it continues.  Till eldar gets redone though, the elephant in the room remains.  The psychic star is a shadow of its former self, and I don't see it lasting or hanging as it did.  But eldar don't need it.  The god damn wave serpent is enough to upset the game, just one unit.  Only the Knight can argue to come close to meta affecting power.  And even then, the Knight is far more balanced in comparison to what you pay for and get.

You have to ask a question of what you want to see in 40k armies.  Power is great, but too much blows it out of the water.  We have been down this road.  Thankfully the path has turned.  Is it a joy filled path of bubble gum and rainbows?  Not really, its a bit dreary sometimes, but the beatings have stopped, (except from that fairy looking asshole), and there may be a field coming up.

The problem is that nothing has come out the brings down eldar, and people want eldar to go down.  I think this is part of why people are upset.  Sure we want a "good" codex, but really I think a lot want something to come that can just stomp eldar.  And it hasn't come.  Thankfully it probably won't.  Waiting through till we have gotten through the 7th redo's, we may come out to a balanced game (relatively), that lacks the super powers of 6th.  If that is bland, I'm ok being a little bland then.