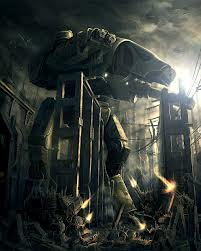 More changes happened over the weekend.  If you are not aware, Forge World released the Escalation approved PDF this weekend found here.  Here is the short of it.  All super heavies can be taken as a lords of war in escalation.  This is not as horrible as it seems, it adds all the xenos armies stuff, granted their are some ridiculous choices (manta).  The escalation book, more aptly called codex: Baneblade w/a few other super heavies, lacks a lot of choices for other armies besides Imperial Guard.  So yeah you can take a reaver, and they are awesome, but really what it means is all the little things like the eldar Lynx, the Malcador tanks, the DE vehicle can come to the fight as well.  These guys are powerful sure, but they are much less on the scale as say a revenant.

So if you are one of those lucky people that has a few IG FW models lying around, you can now play with them, as long as you have the most updated version of their rules.  For me I love that the Stormblade can be used, the plasma baneblade, its my favorite baneblade variant by far.  I don't know why but their is something awesome about a giant plasma gun melting whole armies in holy fire :).  Whatever your favorite is, you can bring it now without having to organise a full day event to play with them.  I think that is one of the things that people are missing with escalation,  you don't have to get ready for a 9 hour game of apoc to bring your big guns.  And to be honest only a few are truly overpowered, almost all are well priced for what you get and the disadvantages of giving extra VPs to your opponent when they go up in flames makes up for their power.  Look at a baneblade, its essentially 3 leman russes, though rear AV12, so if you can counter leman russes or land raiders, you can deal with this not too hard.  Its just going to be 100% effective till it dies.

I will talk more about IG super heavies, but in short all armies have more than one choice for lords of war and its a good thing.  If you want to bring them, go right ahead, I guarantee as long as both know what they are getting themselves into, you'll have a lot of fun.  The IG benefit the most as you have so many FW super heavies you can bring.  Baneblades are good, but over their old incarnations they are more expensive as the side sponsons are optional upgrades (100pts for one on each side), putting most of them over 600pts.  You can def take them, as they are adequately priced now, versus being under priced.  They will perform, but you are paying a fair price for their points right now.

Lots of stuff has dropped on tyranids and if you are interested in getting the full roundup, head on over to faeit 212 to look them up. Tyranids are getting a couple of cool looking flyers, one has guns, the other grabs stuff and punches them like an honest tyranid should.  There is a even bigger gun toting monster, think tyrannofex but bigger and the gun comes out of its back.  Rumors on warriors and psychic powers.  Based on the current trend with new codexs, warriors and genestealers should be making a comeback somehow.  I really hope so as I like them and think it would be a nice change over tervigon spam.  Also rumored hormaguants being beasts, that could be big, giving them a large movement range, and if there are ways to scout them then CC little guys might be making a comeback.

All in all get ready, lots of MCs are coming out, you are going to need some plasma and flamers.  Also lots of large blasts.  Griffons and Collossus will be your best friend againts the new nids, you may have to wait a little longer to get the plastic kits, but if you have FW or your own custom models, bring them!  Also look at some fortifications they are going to keep your guardsmen aliv long enough to kill those bugs.  The Fuel Pipeline could be money, think of lots of flamers and heavy flamers with torrent!  Oh yeah, come to me bugs, I have fire to warmly welcome you.

Also if you are not aware, Cypher is coming out!  I love th fluff of the dark angels and getting the arch fallen angel comeing back will be awesome.  I don't know why people think he will be for DA, he is one of the fallen and as such is Chaos SM.  He has always been in that model line.  This is good as he could have some great potential for CSM and hopefully has some added rules for his army and not just himself.

All in all this has been a busy month with all the releases. I can't wait to fight the new tyranids and see how they changed the rules for them.  I am also hoping to find someone who has a super heavy to fight them, do a little stronghold vs superheavy fight :).  Other wise things are good, have some only war later in the week and should be getting pics taken for the blog.  Trying to keep posting up this week as next week I am afraid there will be very little blogging or 40k going on.  I can't wait to see the new stuff.

GG
Posted by Grumpy Guardsman at 8:30 AM