The Players That Make the Game: A Word on Power Gamers, Fluff Bunnies and How They Make The Game 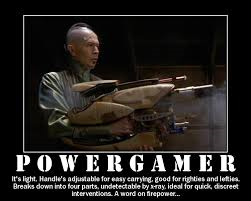 So since everyone is going to town on escalation and the community seems to be splitting either for or against Escalation(Stronghold Assault seems to have been accepted with little question or fan fare) I want to take a step back and talk about the community as I see it, with a look at the online community as well as the "regular" community.  For me I am a recent addition to the online community and while I do enjoy trolling blogs and seeing what people are doing, there is definitely an interesting difference between the community on and off line.  Views are far more extreme for one, I will say that.  But its not just that simple.

First lets talk about terminology, as seen above you have one common one thrown around: Power gamer.  He is that guy, the one that brings the latest and greatest toys and tricks to stomp people around.  But then you have the "normal" tournament player who has his competitive list and plays to win, but he's not an ass hole like the other guy.  So here we have an interesting divide.  What makes someone different from a power gamer to just a competitive one?  Is it attitude, is it personal, is it what he plays?  I think a lot comes down to personal honestly.  The delineation here between the two often comes down to what you feel, which stems from whether you like the guy or not.  Now his attitude is going to feed into how you feel and is certainly the number one factor in deciding that, but if you like the guy, you probably aren't going to consider him a power gamer.  Attitudes differ, I am rough around the edges and curse and am in general abrasive.  If you know me and have spent any amount of time around me you know its a complete act and that I'm soft and fluffy on the inside and its not that I don't like you.  Some people like it or hate it and I'm sure there are people at my FLGS that think I'm one of "those guys".  And I do like to win as much as i love my fluff so they wouldn't be completely wrong in doing so.  I don't believe in being shown or given mercy and like to play to the bitter end, rarely will I call a game if I'm losing and if an opponent wants to call it I will try and convince him to keep playing.

Some can see that as rubbing someones face in it, keep on playing and crushing them, I just don't consider giving up and have dug my self out of so many holes just by continuing to play.  Now you have the other side of the spectrum which are fluff bunnies.  They have a loving history of their army, names for many models with detailed exploits, their army follows the way of war for its chosen side.  They care not for what the allies chart says, those armies will never see each other except for the opposite side as far as they are concerned.  They see power gamers as twisting the game into something it should not be, ruining the years of fluff about their armies (Tau+SM), and are concerned with playing a setting, not so much a competition.  They love the back stories, the art, the unique rules that represent the fluff of their armies.  They despise any departure from the fluff and any attempt to twist the game into a balanced knife edge of just models moving and rolling dice.

Now there is some intended hyperbole there, as the extreme is far easier to see than the middle.  But is that all, are there two "factions" of 40k players?  Well I think there is a third and that is what I like to call the hobby bunny/snob for the extreme ones.  These are the ones who generally care very little for the playability of the models, how its supposed to fit into its parent army and the history behind it, but instead like them because they are cool.  They are your artists, and I do mean artists for the level of skill that they display.  On the extreme end these tend to be the people that enforce painting and basing standards into tournaments, who look down their nose at unpainted models on the board.  They may not particularly care for winning or whether or not the Cadian 438th would ally with the emperors children, but they like the models and they look sweet.  For me I honestly find the extreme hobby snobs to be my least favorites, in the end for me this hobby is about playing a game with someone, so an unpainted model is no game breaker for me and even if someone has a lot of unpainted models that is ok.  I know what a struggle it is for me to paint and try and give the benefit of the doubt to other players.

So these three groups of gamers and all in between make up our hobby, and I do mean make it up, as all of your thoughts and beliefs have as much if not a greater affect on the game than any single rule that GW issues.  Generally these groups do well to balance each other, the competitive community keeps the fluff bunnies on their toes and lets them know that yes you are going to have to play with good units too and not just the ones that were really good in that one BL novel.  Fluff bunnies call power gamers on their shit and let them know that its not just a narrow competition of victory and defeat, you can just hang around a BS while rolling dice too.  The Hobby snobs give everyone else a standard to achieve too, even if some are a little self aggrandizing in their skills and can steer the game too much away from the actual gaming part of it.  Sorry if you want to have a painting competition go have one, stop trying to make tournaments into one!

I think the Internet community is a microcosm of the extremes, as inherently the people that believe in their views the hardest tend to be the ones that shout the loudest.  As a relatively recent addition, I noticed though a prevailing pessimism online, either about GW, the direction of the game, competitive play etc.  This is by far not the only thing out there and there are many who try and keep positive and happy.  For my I do try to, I have no desire to become one of those that shouts the doom and gloom of 40k.  I have been around 40k a while so its hard for me to believe that so many are throwing in the towel.  I have certainly taken breaks, I left the game for a while at the ned of 4th, came back in 5th, left near the end, and then came back for 6th, though to be fair the army had a say in me leaving 40k the last time.

I guess I just find it so hard to believe people see this game needing banning, that things are so quickly stomped down.  Escalation is a perfect example, I have already talked a little about it though so you can read my thoughts on it in that article.  Why the doom and gloom people, a single game was played where a revenant titan beat the crap out of an army completely unprepared to face it at all.  Wow thats so revelatory!  Should comp be instituted in tournaments, no I really don't think so.  Is the seer council and screamer star hard to kill and can be un fun? Yep it can be.  But there are ways to defeat it sucks.  What we can do is push for FAQ from GW to change it, house rule it, or just accept it and move on.

I don't see the banning that is mentioned on 3++ as being the right call.  But IDK.  I have changed my views on things over the last 6 months or so, and i will admit the online community has led me to that.  I used to be totally against FW, no FW in tournaments, super heavies should stay in apoc, etc.   Well know Im not so sure.  I think its up to the TO and their discretion in how they want to play the game as they think it should be.  That is always what it comes down to.  Its a few people or just one person's opinion on how the game should play.  Now you don't have to attend any tournaments, none at all.  And if you don't like where the TOs take the game, let them know and don't go.  If you do, then go have a great time.  That is as always your own call.

For me if a TO banned escalation, I would be ok, as they are essentially only banning a one use FoC slot, and if no one has access to it then thats fine, up until a few days ago no one had it so thats not a major change.  But partially banning or comping I do not like, as that is completely subjective.  You say no D weapons, does that include the close combat D attacks as well, what about vortex?  You see where this becomes an issue?  Since escalation is so contained, I see is as something that can be banned or not allowed for tournament play.

Should it though.  I say let it happen, lets see where this takes us before we come down too harshly on it.  Fluff bunnies, don't let the Comp skew the game too far in one direction, but that also means you can only have say if you are going to these events.  I think super heavies will be just fine and in the end, the fluff bunnies, power gamers, and hobby snobs will work it out and a consensus will be reached.  In the end we are a community, and that is far more important than the rules that we play by.

As always leave comments and feel free to read whatever else is on this site.