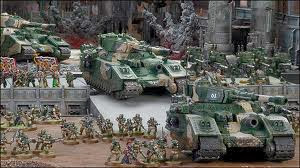 Ok so I have gone over Escalation a few times, but I haven't really reviewed it either.  Not going to go through the whole book, but I will go over what is important for the Imperial Guard.  Now see my previous post on FW PDF update if you want to know a little more about all the additions to escalation.  So just in this book, IG come out the best with just about every baneblade variant where other armies only have one or two.  Now the FW update adds a lot more so its not so lopsided.  But There are a lot of choices here for IG if you are looking for some massive firepower.  Now few things to go over first.  One if you take one, your opponent gets +1 to his sieze roll and can roll on the lords of war warlord trait table.  Also he gets a VP for every 3 HPs knocked off your super heavy.  So you have to watch out as there are some decent disadvantages to taking one.  2 super heavy vehicles are not affected by results on the damage table, they just keep on going and lose one HP from the pen, an explodes just causes D3 HPs damage in addition to the one from the pen.

To be honest this book is just a rehash of the rules for apoc.  I will go over some of the tables, but if you are familiar with those rules, nothing new here.  The missions are meh, unlike the stronghold missions, the only one that strikes me is the one where your opponent(or you) picks a superheavy and then you get that many points plus a 1000 to play against him.  Goal is to the kill the super heavy.  If you kill it by turn 4 you win, if it survives longer you lose to varying degrees.  This could be a fun mission, the others are ok.  One has you drying around try to crush more  buildings than your opponent, the others are similar and boil down to alot of superheavies compete to kill more things.  I am not huge fan of the missions here, they are kinda meh.

Now what can you take?  Well in the book you have the baneblade variants.  Note in the new update you can take every IG super heavy, Titan, and the imperial bombers.  I won't go over all of those, focus will be on what is in escalation.

Baneblade: So the standard baneblade is the basic superheavy.  All variants are AV14 F, 13 S, 12 R, and have 9 HPs.  Its tough, but not much tougher than a leman russ besides the rear armor.  It will though be firing with full affect till the last HP is gone. It has the Baneblade battle cannon which is 72" S9 AP2 Primary weapon, Apocalyptic blast, demolisher cannon, autocannon (not Coax), hull TL heavy bolter.  It can pay 100pts to get two side sponsons of a lascannon and TL heavy bolter(thats how it reads).  The battle cannon is nice and you can shoot a lot of things.  At 525 base he is very adequetly priced, and gets a little expensive once you add the sponsons.  To be honest he is pretty fair priced and is almost on the side of overpriced when you take into account for the VPs your giving up when you lose HPs.  If you are looking for a fun, tough unit then this guy is fine and will give a good fight, but he is hardly the best one to choose from the list.

Hellhammer: The next one on my list is the Hell hammer at 540 base.  Same stats and options as above, except for his main gun.  The "bane cannon" is 36" S10 AP1 massive blast ignores cover :).  Yeah I like this guy a lot more than his brother.  Those mean Tau and Eldar are going to feel a lot of pain, say good by jetseers and broadsides.  He honestly prob doesn't need the sponson upgrades.  I would honestly say that you can keep him base and put him far forward enough to blast stuff, you can prescience him as well to make him more accurate.  He works really well with a armored push and is great replacement for demolishers and other russes because it can more MORE than 6".  So it can keep up with your chimeras and hellhound variants and it blocks the shots against them. All taken this is a good choice and I really like this tank.

Stormblade: This is not in escalation book but is added by the FW PDF and it is one of my favorites, rules found here.  Its 455 and can get the same side sponson upgrades, except it can replace its lascannons with targeters for +1 BS for free.  Its main armament is the Plasma Blastgun which has two modes of fire.  The first is Rapid with  72" S8 AP2, primary 2, massive blast. The second is 96" S10 AP2 primary 1, apocalyptic blast.  I honestly don't know whether to get the sponsons or not, I would say just go with the gun and have fun.  This thing can do damage but its hardly overpowered, its only one weapon and the sponsons are expensive for what it can do.  Keep it at 455 and just melt stuff and cackle with joy.

Stormlord: Ok here is probably my next favorite and this is just a fun one.  Its 480 base and has the Vulcan Mega Bolter 60" S6 AP13 Heavy 15, which it can fire twice if it doesn't move.  It also has a TL heavy bolter and 2 heavy stubbers.  It also has a transport capacity of 40 and can have 20 shoot out of the top. Yeah it gets better, it counts as opened topped for the models shooting and disembarking, ie you can assault from it :).  Oh but it doesn't count for armor penetration or on the damage table.  So yo get all the benefits and none of the bad things.  This is one that you can do a couple of things, one is to load it up with heavy weapons squads and just sit back and blow a lot of crap up.  The other is to go across the board mowing squads down and deliver 40 screaming guardsmen into the fight.

Shadowsword:  Ah and here is the D.  Its 455 base and has the volcano Cannon 120" SD AP2 Primary1, large blast.  It can get the normal upgrades including the targeters. This is if you want to go titan or super heavy hunting.  Its not that bad, but it only has one shot, I would only really bring this if I knew some one was bringing another super heavy.  Honestly the sponsons aren't worth it, an inquisitor can prescience it and the D weapon is going to kill whatever it hits so no real need for back up here, spend 100pts somewhere else than a couple of lascannons.  I like it, its not too expensive but its only one gun, granted its super effective, but your paying 480 for one D, where the revenant gets 4 for 900, so your not really getting a deal.  If your lucky you can kill it before it kills you, thats kind of how D weapons work.

Banehammer: Its the cheapest at 410, thats pretty much what's going for it.  It has the Tremor cannon 60" S8 AP3 Massive blast, Earthshock-basically any models that are hit but survive take a dangerous terrain test.  It has a TL heavy bolter as well.  It can hold 25 models and 10 can fire from the top.  It is not counted as opened topped like the Stormlord.  Really its ok, its nifty but not amazing and I would take the stormlord over this any day.  Dangerous terrain is not as bad as it once was.

Banesword: Another cheap one at 430.  It has a TL heavy bolter and the quake cannon 24-180" S9 AP3 apocalyptic blast. It can't shoot its gun at less than 24" which may not be an issue in Apoc, but in normal games this is a huge disadvantage.  It looks like a shadowsword, its trying to pretend to be a shadowsword, get a shadowsword.  25 more points gets you so much more.

Doomhammer: Ok this one is 420 and a little better.  It has a TL heavy bolter and a magma cannon 60" S10 AP1 Large Blast.  It can carry 25 and 10 can shoot from the top, but again its not opened topped.  This can make a good long ranged blaster that can protect your troops for grabbing objectives.  That's really the way to play this, its a bunker that you plop in a good location near objectives and just blast till you need your guys to get out.  Not a bad one at all.

Stormsword: This one comes in around the middle in points at 480.  It has a TL heavy bolter and the Siege Cannon 36" S10 AP1 Apoc blast, ignores cover.  Its a cheaper version of the Hellhammer, you lose the demolisher cannon, but its a much bigger blast.  This is another really good choice, if you are looking for a something that will remove anything short of a 2++ invul, you have found your tank.  The hellhammer has more shots but its more, so its a give and take.  If you are looking to save points and don't care about a transport, then this is your tank.  Its pretty devastating short of a D weapon.

That about does it.  The Warlord table is ok, its a good mix for all armies, but some are really crappy for guard. The first twin links you, oh wait we have an order that already does that.  The next gives you preferred enemy which is ok.  The next blows as you get armor bane and flesh bane in close combat against them, wooo your Company commander sure has got that Titan now.  The next is awesome, as all rolls on the D table are at minus one for your opponent.  So that means he can never roll a six against your troops and they will survive the shot on a 2+.  Not as great for your vehicles as they will still die pretty much all the time.  The next lets you deep strike and not scatter within in 6" of the lord of war.  Now this can be good if you have melta vets in vendettas, that gets you right in there for a lot of melta shots.  The last lets all your shots made by your warlord and unit get the rending and AP1.  This is situational but could make the nice little boost to kill the lord of war.

The D table is simple and I believe I covered it in the stronghold article.  Anyways you hit then you roll a D6 and look to the table.  A 1 does nothing to non vehicles, vehicles suffer a pen.  That's a little lop sided, as a lot are at ap 1 or 2 so getting an explodes result is not that hard.  2-5 is an explodes for vehicles and D3+1 HPs for Superheavies, infantry suffer D3+1 wounds. A 6 kills everything forever.  A super suffers D6+6 HPs and non vehicles suffer the same number of wounds.  And yes that is per model hit not unit.

All in all these are good vehicles here, some are much better than others.  The little missions are ok but really not worth going over and to be honest if you already have Apoc you have the rules for the important exceptions that superheavies bring.  I would find a friend that has it and make copies of the important pages.  It has some really cool artwork though and if you plan on using it alot, then pick it up.  If not I would recommend saving your money for something else.