Surviving the D: Options For Beating the New Bigs Boys of 40K 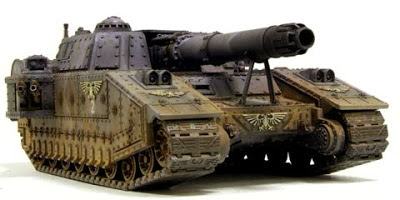 Since superheavies are the new big boys and D weapons the biggest baddies of them all, you are going to probably have to deal with them.  That's ok, the dirty D is not the end of all that is good in 40k.  As Imperial Guard, we actually have a lot of great options to counter Super Heavies in general.  Now I know I don't like to publish lists online, but I think this is one of those times for an exception, granted the following won't be too detailed so you can fill in the blanks.  Also this will combine survivability with offensive power as well, as its great and all to be able to kill the titan, you need to actually survive to shoot it also.


So here is where we start off.  This will be a 2000pt list, just using it as a guideline for points, though no double force org will be used so if you go less you won't have to worry about swapping slots.
So first thing you need is to actually survive hits from the D.  There is only one thing that can stop a D weapon right now and that is a void shield.  So we going with a void relay network.

Relay network w/ 1x Pipeline and 2x Void Shield Generators-240pts
Here is your survivability, you have 6 void shields to hide behind.  So your opponent is going to have to waste lots of fire power to bring this down.  Wait you say, wave serpents have lots of firepower and it wouldn't take much for them to bring them down.  True except he won't have many of them because of how expensive a revenant is.  I am going with worse case by the way, as this guy is prob the all round toughest to kill vs its damage output.  There are more that can do more, but they lack the speed and holofields that make it so hard to kill.

Next is HQs, first is Inquisitors.
Ordo Xenos x2 w/prescience, 5x servo skulls, conversion beamers-215pts
Now you don't need two, but I like having two around casting prescience and shooting their big beamers.  Understand this army is not getting up in someones face.  Its hiding in its shield till the big baddies are dead, then moving out for objectives.  servo skulls keep your opponents infiltrators and scouts in check and make your blasts better. They are supporting your other big weapons that are actually doing the killing and can help out with the ranged fight.

Company Command Squad
Commander w/2 P pistols and 4x plasma guns-130 pts
So he is here because you have to take him.  They are there to plug gaps and bring down marines and monsters.  Also seriously considering a Chimera, as keeps him alive and them all can shoot out of it.  They can cast orders, but they are really there to gun stuff down  that gets too close a plug any gaps.

Next lets go with troops.
2x Platoons w/ 2 squads each with autocannons, chimeras
2x PCS w/4x Grenade launchers, chimera
All this for 670

Now you have two troop choices and have 6 chimera hulls with their wonderful S6 multi lasers.  They really are here to hide in their chimeras under the shield and use their multi lasers and autcannons to bring down vehicles.  When fighting the dreaded revenant, they are going to be your first round of shooting.  Going for as many glances as you can get to knock down hull points before finishing it with your heavy hitters.  You also have enough bodies that you can seize those objectives later in the game.

So here are your big guns, the three russes are there to bring the pain.  Yeah I know they are not every ones favorite variant.  But I like them a lot and the thing is all of their weapons are AP2, so you have a pretty decent chance of penning and then exploding, meaning you could do 4 hull points of damage in one shot on the revenant or other super heavy.  You will damn well be presciencing them so you will be hitting with most of your shots.  Then you have a very good chance to pen, you get to roll 2D6 with the vanquisher battle cannon for pen, so yeah you are penning most of the time.  Then you just need a couple of 5s and 6s.  You would have unloaded with your chimera's earlier, statistically you will get one to two glances on it, so you'll drop it down a couple.  This big thing with that is getting past the holo field, if you get enough then you will get a couple of glances.  Also your autocannons, which you can twin link with orders or prescience, though one is going on the leman russes so don't forget.

At that point, you will only need a few pens to take down the revenant.  It has 9 hull points only, along with most super heavies.  You have a very high chance with this set up to destroy that revenant turn 1, and if not well it will die in the next turn.  The shield is key and it is what gives you that survivability and against a lot of these superheavies that cost a lot, your opponent won't have a lot of other heavy firepower to counter those shields easily and a good chance will be that those shields will be eating D weapons.  Thats what they are there for.  The vendetta is there to add anti air and additional tank hunting fire power.

At this point the list is shy about 100 pts of 2000.  You could add an other shield generator which is a good option.  Or more weapons on the infantry.  There is a lot you can do with this.  You may not need the second inquisitor but I like having two to cast prescience and it helps with the added firepower they can bring.  Dropping the conversion beamers is an option, but for these guys they are staying back to prescience your tanks and other infantry to keep them accurate.

I like this list, it has enough bodies that you won't have to worry too much.  But you will need to keep them in the Chimera's early till your other units have whittled the opponents army down.  If you are fighting super heavies, this list will make your opponent pay for bringing them.  Also it works well against other lists.  Great thing about the shield is that it works against hell drakes just as much as D weapons.

Tau missiles will be wasted on your shields and all those ignore cover shots may not do anything too you.  So this is not just an anti super heavy list, it can work very well against the current big boys.

There are definitely room for playing with this, and that is on purpose, this is not meant as a strict copy paste.  Use as a guideline and swap as you feel needed, but I think this is a great base for titan hunting.

Hope you all are having a good weekend.  And Fear not, you can survive taking the D.