Back From the Break 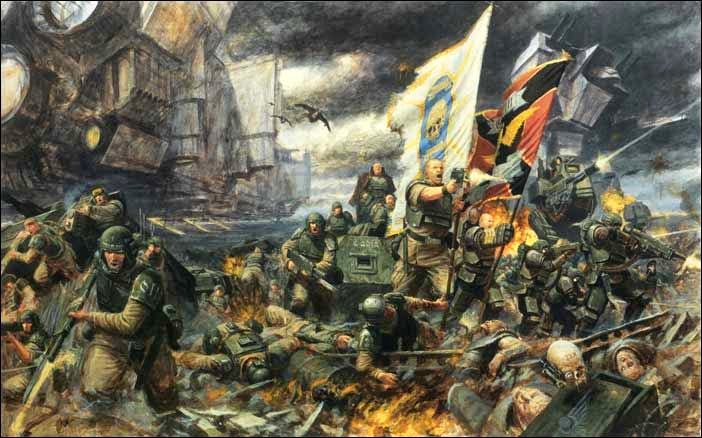 Ok so finally back from my break from the internet.  Last week was very busy but was great and the wedding was great.  A break from things is not a bad thing.  But holy crap has a lot dropped in the last week.  A ton of leaks have come out in regards to IG and obviously the Militarum Tempestus came out over the weekend.  I was not able to get my hands on one and as they have only released the Ipad version for digital, I am waiting on that as well.

However the codex is pretty much fully leaked on the interwebs so I should have an initial thoughts and review up shortly and a follow up as soon as I get my hands on a digital or hardback copy.  I like what is in it so far and I'm sure most of you have taken a quick peak of it.  It has two pretty nice formations, one being air based and the other ground based.  HQ is commissar or Tempestor prime in command squad, which was expected.  All in all we got exactly what was expected though i was hoping for some relics and a special character, but I was not surprised to not see any in the Tempestus codex.  Short its a way to play with lots of storm troopers with decent air and ground support.  It will play well on its own but will be best as IG ally or Inquisition ally to get full mileage out of it.

So the other big leaks that have come out are good. Tank commanders, who can issue orders to their squadrons.  Yeah issuing them to all tanks would be great but at least they have some decent orders and let you run an armor heavy army if you want to.  You'll prob have to pay a troop tax still but really not a bad thing having some vet squads rolling around.  Chimeras are 10pts more, not a big deal as they were pretty cheap for what you got and honestly a front armor 12 with two heavy weapons and 5 fire points is a pretty nasty transport when compared to others.  I was expecting a slight nerf to chimeras, though I was more expecting the fire points to drop in number so a price increase is fine by me and with vets being rumored at 10 less it all pretty much evens out.

On vets, as stated they are looking to be cheaper, lose one special weapon.  I am fine with this, three special weapons was really powerful and with upgrades remaining about the same besides close combat weapons, this is really a surprising boon.  Along with a heavy decrease in doctrines (rumored at half the current cost) this is really great.  So much for GW trying to sell scions over vets as with this you still have a very versatile squad that is overall much cheaper than before with no real loss other than a weapon option.  If you were running vets before, you'll still be running them now.

Orders are looking amazing and I can't wait to see them in the codex, looking to have 6 standard orders with 3 'ancient' orders, meaning maybe they brought back regimental officers and not just company commanders.  Orders are the life blood of the IG and its looking to be hunting season.  The FW artillery is looking to be out, kind of sad but they are still 40k approved from FW, or really just have a copy of the page from the current dex as they are exactly the same so no bother buying the imperial armour.  With the basilisk, manticore, and wyvern, you still have access to solid artillery and the old ones rules have not changed so keep using them if you want too.  I see no problem with that.

Armored sentinels have dropped a substantial amount which is great as they were overpriced before but are now at a good level now to take cheap squads, with weapon options getting cheaper.  Scouts seem to be unchanged but thats ok, I have run them cheap before with good effect.

The initial real disappointment is ogryns, which appear to be almost unchanged, still the same points with maybe event he loss of furious charge and stubborn.  The bullgryns have a grenade launcher and their shield with a 4+ save.  No word on exactly what the shield does yet but it seems someone has an overvalued idea of what ogryns are worth.  I'm not saying they are worthless, will wait and see and with some of the new orders they can probably be made to work ok, but this is a surprising miss.  I am disappointed as they needed a drop in points.

We got ministorum priests ala sisters which is exactly what I wanted.  These guys are going to be very useful and although ogryns may not be your cc unit of choice, a blob with a priest or two will make that a nasty unit to stand up to.  Commissars are inquisitor price and can go anywhere(rumored), exactly what they needed.  In addition they no longer just kill the leader, is a random roll 3-6 you choose, 1-2 your opponent chooses.  Also you automatically pass the check.  Yep these guys are good and I will be using a couple to hold the line.  Inquisitors are great but they work better in other support role than hanging out with guardsmen and cheap commissars can do the job better with you essentially always passing your checks(minus one guardsmen). With you no longer having to shell out for a lord to attach to conscripts this is really good.

There are a little bit more rumored but all in all this is looking to be a great release to IG with only a few sad things, but most of them being the same sad from the previous codex so no change really.  So expect a lot more to follow in the days to come and get ready for some IG to hit the table hard.

GG
Posted by Grumpy Guardsman at 10:16 AM