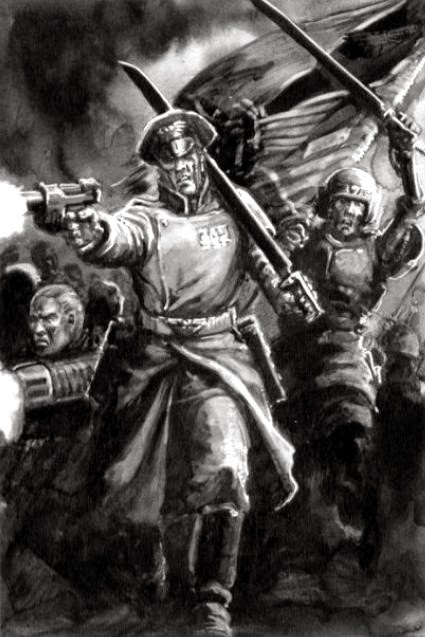 To continue where I left off, I will be finishing off the Company Command Squad's advisers, the Officer of the Fleet and Astropath.  These two changed the most from the previous edition, the MoO only really changing in points.  These two now add a little more to your army but are much different in how they work from before.

Lets start off with the astropath.  He is 5 pts cheaper and no longer affects reserves.  Instead he is now a ML 1 psyker with only access to telepathy.  It is worth noting that he is the only psyker in the IG book that has access to this power.  That being said he is only Ld 7, so his psychic powers are going to be iffy, with only a slightly better than 50/50 chance that they will go off.  What he does add is a very cheap bonus to deny the witch to your command squad.  Technically all the advisors only have CCWs, but can change out for laspistol for free, you should do this with all of them as there is no bonus to just having a CCW, at least a laspistol can do something.

Despite being low leadership, the astropath is still something to consider and I would still take him if going for a full battle staff command squad.  He will add a bonus to deny the witch and allows your primaris to move somewhere else.  And telepathy is just plain good.  The primaris power is shriek, 3D6 wounds that ignore cover and armor, after you minus opponents leadership from the 3D6 result.  It may not seem like much be it can be a very nice attack in a pinch and not all opponents have Ld10 everywhere.  Note this works on squads whether they are fearless or not, so low Ld gaunt squads can potentially take a lot of wounds from this attack.  Its nice and though weaken resolve is gone, this is still a great offensive power that is better than a laspistol and will surprise your opponents when they least expect it.

Now I would roll on the telepathy table every game, as there are still good ML1 powers and shriek is a good fall back if you don't get the one you want.  Now the 5 & 6 result are ML2 so you aren't getting those, so you have a 1/4 chance of getting the power you want.  Dominate is the first one and forces an enemy unit within 24" to take a Ld check every time they attempt to make an action, if they fail they can do nothing for that phase.  That may not sound like much, but against the right units that don't have high leadership this can be crippling.  Note to pay attention to the wording of leadership modifiers and special rules.  For example an ethereal allows tau units to use his leadership for morale, pinning, fear, and regroup tests.  Dominate does not cause any of these tests, just a leadership based test, so the unit will use its base leadership and not the ethereal's unless it is joined to the squad.  May seem like nitpicking but it is important to note because all of those are specific tests with different results that use the leadership characteristic to get the result.

Mental fortitude is a blessing with 24" range, the target friendly unit immediately regroups and gains fearless, so if gone to ground they get back up.  This is less useful with get back in the fight, so most times I would take shriek if I rolled this.  However if you are low on orders, this is a good freebie to regroup a unit that is outside of order range.  Usefull but probably the "worst" on the table.  The next is Puppet master, which is really the one I want.  Basically 24" range, target enemy unit and you get to make a free shooting attack with it.  You get to pivot the unit for purposes of aiming, important to note, the unit goes back to original position after firing.  Puppet master just doesn't suck and there are many uses for turning your opponents weapons on themselves.  This alone is a strong reason to take the astropath.  The last is terrify which removes fearless if the unit has it and causes them to treat all enemy units with the fear special rule, and the unit must immediately take a morale check.  This is pretty good, it has a 24" range and can be a nice force multiplier if you are trying to get a unit off an objective.

For me I would roll for either puppet master of terrify, if getting neither I would take shriek.  They are a cheap psyker to boost your deny the witch and have access to multiple offensive powers to be a pain in your enemies side.  Even with low leadership, you'll be getting your powers off about half the time, and if you roll ones like I do, you'll have little problem using him :p.  Best way is to keep him hidden in the squad and surprise your opponent with him.  He is not however an auto take and if you don't feel the need for a DtW bonus or telepathy I would leave him home.  I will be testing him out to see how he works, but I see him being a nice super cheap psyker that is more frustrating than anything.

The next is the Officer of the Fleet.  He received the same points drop as the MoO and a change to his rules.  He can add +1 to your reserves, or -1 to your opponents.  You take a leadership test before reserve rolls are made and decide which order to use if the test is passed.  Now based on BRB, you still use the highest leadership in the squad for this test.  Though he takes the test, all leadership tests must be made on the highest leadership in the unit.  It is also worth noting that the rule does not specify that the test must be made on the OoF's leadership characteristic.  Now an FAQ may come out changing this, but by BRB this is how it works till changed.

He is really good and many will probably take two command squads just to double up on him.  The orders from multiple Officers of the Fleet do stack now so you can deny your opponents reserves to a 5+.  Where the officer of the fleet will really show his worth is in denying your opponents reserves.  Now many armies don't use them, but at his cheap cost he is hard to argue not taking if you are already taking a CCS.  This guy is pretty much an auto take, his ability to help you out with reserves and more importantly deny them to your opponent is game changing.  Preventing your opponent from getting his reserves in when he needs them allows you to control the game and possibly force him to deploy his forces on the board to avoid that risk.

In either case he is just plain good.  I would almost every time use him to intercept reserves, as I am less worried about mine coming in and more than happy to risk that and keep my opponents off the board.

Both of the advisers are good, the OoF is pretty much an auto take and the astropath is certainly useful if less reliable but gives cheap access to telepathy and boosts your deny the witch.  Anything you can do to boost the chances of your CCS of surviving should always be taken, if only for adding an additional wound, they are still a useful choice to take and will be a thorn in your opponents side.  I strongly recommend both of these, really all three as I previously talked about the Master of Ordnance.