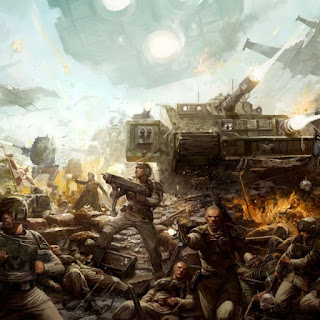 While not terribly recent, GW has released a new round of FAQs, with quite a few that clear things up for the Imperial Guard.  This is from the actual AM FAQ and the FAQ for the general rules.  Nothing game changing really, but does confirm a few of the things that I have asserted over the last few years.
And first up, well its like I said it was way back when, if you are firing ordnance weapons, even with heavy, all the rest are snap shots.  Here is the proof if you don't want to dig through the FAQ. 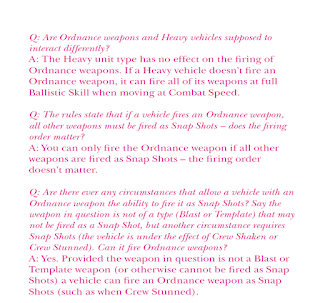 And GW even confirmed the firing order does not matter.  Now Power of the Machine Spirit will allow you to fire one weapon at full BS, but this is pretty much the only way around this for Leman russes with ordnance. 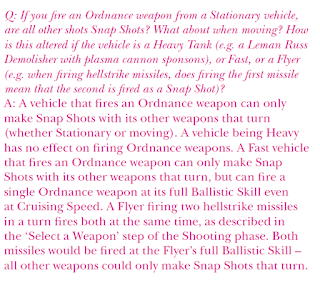 But they did clear this up for flyers as well.  A standard valkyrie has two ordnance missiles, it can fire both and since they happen simultaneously you can use both at full BS.  Not amazing mind you as they are still BS3 one shot weapons, but makes a flight of three standard valkyries able to possibly knock a target out.  I would say it makes standard Valks an option that is at least somewhat useful.

Bad news though, as it is now final that Yarrick was not meant to have stubborn and he also can only be warlord if you do not have any other models with the senior officer special rule.  So yeah, kinda bummed as stubborn makes sense, but it is what it is.  Doesn't really change how he is played currently, as this was the assumption, but would have been nice. 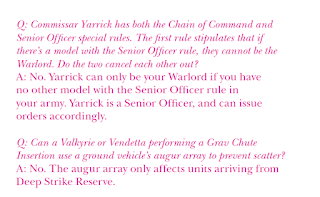 Another little clarification is that an Augur array cannot be used to prevent scatter for units using Grav Chute Insertion.  I was dubious of this working, despite some peoples claims, but now it is cleared up.

Good news though, Chimeras can fire their lasgun array and a model can fire out of the hatch, as long as you have enough to man both.  Its a small thing, but can add up over a game so nice to know you can still have a heavy or special weapon fire out the top and use the lasgun arrays.

These are really the major things that directly affect IG units, but there is quite a bit in the BRB FAQ, so be sure to read the whole thing.

Again, nothing really major, just quite a few clarifications, most on stuff that we already thought was true.

Posted by Grumpy Guardsman at 1:59 PM