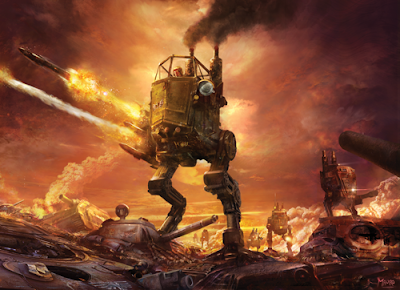 Sentinels, one of the best models in the Imperial Guard range, and yet considered to be one of the most disappointing on the table.  Now I don't completely agree, as most of the disappointment has as much to do with what people want them to do, which may not match up with the lore of the vehicle.  That being said, they are useful and can fill a role in your army, as long as you keep in mind their limitations and what they essentially are.
In short, sentinels are nothing more than mobile/armored heavy weapons teams.  When comparing them to heavy weapons teams/squads, you can see what advantages and disadvantages they have.  The sentinel comes in two variants, Scout and Armored.  The Scout is 35pts with AV 10 all around and opened topped, has Scout and Move through Cover.  The Armored is 40pts and is not opened topped and has AV12 front armor.  Both come stock with Multi-laser or Heavy Flamer (its a free "upgrade").  The scout can upgrade its weapon to an autocannon or missile launcher for 5pts, and lascannon for 10.  The Armored is the same, except it can take a plasma cannon for 10pts.

With the current costs and rules, the Armored sentinel is the standout winner, and even more so with the formation that they can be taken in.  Opened topped is a killer for scout sentinels, especially given the cost of camo netting, which isn't bad for something like a hydra or leman russ, but for these guys it really is hard to justify the additional 15 pts per model for the camo netting.

As I mentioned, sentinels are nothing more than heavy weapons teams.  So lets compare.  Both have two wounds, sure its technically Hps for sentinels, but both have the same number.  Heavy weapons teams are only T3 so are easily doubled out by S6+ shots.  While sentinels can potentially be one shotted, armored sentinels will require AP 2 or 1 shooting to do it, and personally I would rather them be taking a melta shot than a leman russ.  Second point of comparison, moving and shooting.  Heavy weapons teams simply can't.  Yeah there is the order for the emperors shield platoon, but that formation is not exactly worth it.  The sentinel is a walker, so it can move and shoot with no issues.  winner again sentinel.  The sentinel can be shaken, but infantry can be pinned or fail morale checks, so this is more of a draw.

Now we get to pts.  At base, three armored sentinels with Multi-lasers cost 120pts.  A three man heavy weapon squad with heavy bolters or autocannons cost 75pts.  Definitely cheaper, but a far easier to destroy, and are very limited in their ability to reposition.  Lascannons, the sentinels are 150, and the heavy weapons squad is 105pts.  The cost difference is the same for plasma cannons, which the heavy weapons squad cannot take.  The sentinels don't necessarily win on pts, but they are not massively more expensive especially when compared to their increased mobility and survivability.

Heavy weapons teams do have an advantage, and its not a small one.  They can be taken in squads, and hide out there, giving them a significant boost to survivability.  So at the end of the day, there is no absolute winner, but the sentinel has the advantages of mobility and armor, giving you mobile heavy weapons teams.

Tactically, this gives you options to move weapons around the field and reposition them.  With the exception of plasma cannons, they should be kept cheap.  They are BS 3 models at the end of the day, so that limits the usefulness of missile launchers and Lascannons.  Trust me, I want missile launchers to work, but they are only reliable with frag, and multi-lasers and heavy flamers are cheaper.

Now we come to the Recon company in Mont'ka, as this further boost Armored sentinels.  The formation consists of 2-4 sentinel squadrons, all squadrons must have 3 sentinels, so 6 sentinels minimum.  The entire formation has outflank, not a boost for scout sentinels, but it is a significant boost to Armored.  The other benefits are dedicated hunters: on the first turn, nominate an enemy unit, all sentinels from the formation have preferred enemy against that unit.  Then you have company command: One sentinel model is the commander and gains the character type, and can issue one order a turn.  Those orders are Move Move Move (roll 3D6 for runs), Take Aim (Precision Shots), and Forwards for the Emperor (Shoot and then Run), with the Sentinels counting as Ld 8 for orders.  The orders are ok, with really only the shoot and then run order being the one that will be used often.  Precision shots sound good, but you still have to roll a 6 to hit, which takes heavy flamers and plasma out of the picture.  Move is not a bad order, but the utility is limited.  In my opinion, the big miss here is that Bring it down is not an order they can use, as that would make sentinels a much bigger threat.  If Move Move Move had been dropped for this, this formation would be significantly better.

This formation is really the only way you should take sentinels, as even 6 armored sentinels are pretty low on the pts scale and easily fit into an army.  This gives your armored sentinels access to outflank, and with the shoot than move order, giving them good mobility when they come on the board.  Given this, I would take one squadron with Heavy flamers, and one with plasma cannons.  That or both with autocannons, though multi-lasers are not bad for their cost and number of shots either.

At the end of the day, they can get in your opponents back field and force them to reposition, and hopefully draw some of their AP2 and 1 weaponry away from your more valuable vehicles.  They are sacrificial lambs, with just enough armor to possibly survive a few turns in the back field.  Armored sentinels can be surprisingly tough to kill in close combat, as even krak grenades will need 6s to glance.  They won't last any amount of time against a deathstar, but that is not their purpose.  You want to draw units fire and assaults away from your units.  Yes there is interceptor, but would you rather the riptide ignore cover large blast your infantry squads out of existence or waste a turn against your sentinels.  Something to think about.

I understand we want sentinels to be awesome killy units, and I think there is definitely room for some improvement.  But that being said its limited.  BS4 would be great, but that just isn't guard, so you just have to accept BS3.  They are not CC units, making them so is again just not what they are.  So what can you really do without making them not really sentinels anymore?  Pts reduction?  They are already very cheap and in my mind pts costed appropriately.  Really, its the scout sentinel that needs the help.  And this is more of a gripe in that GW doesn't really give recon units their due in how they actually work on the battlefield, which is to assist in target acquisition for the army.  Well, they have already created a rule, and its even in the same book as their formation.  That rule is Target Sighted.  It allows a model to forgo its shooting, giving the rest of the formation twin linked against a single enemy unit with 18".  Tweak this slightly and give it to scout sentinels.  Change formation to detachment and now scout sentinels can actually perform their intended purpose, you know, to scout and find enemy units for your army to shoot at.  And then, you could actually consider lascannons on your sentinels.

The other would simply to tweak the formation in the next book, simply changing out the orders as mentioned above.  Giving sentinels access to orders, and more than just you can move better, would also help them out tremendously.   And for gods sake, lower the cost of camo netting for scout sentinels, or just make it part of their wargear!  It'd be nice if the chain sword thingy was given a rules representation as well, but thats minor, don't see sentinels every becoming a close combat unit, nor should they.

So sentinels.  With the formation you get outflanking armored sentinels, bring heavy weapons into your enemies rear and flanks, drawing fire and hopefully taking a few units with them.  They are certainly not a bad choice, with good all round utility.  While not auto-take, they provide options to mess with your opponents battle plan.

Cadia Stands!
GG
Posted by Grumpy Guardsman at 9:08 AM