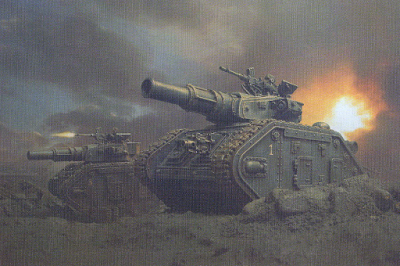 As I continue going over the Cadian Battle Group, today is going to cover the only really playable way you can take this detachment.  This is really the only major success that this detachment sees, as you can take a pretty much all tank army without having to take a troop tax.  Now you won't benefit from the majority of the detachment benefits, but the formation itself makes up for most of this.  Its not the most competitive army in the current meta, but still more than capable of winning games and able to deal with a lot of threats.
The Emperor's Fist Armored Company is the core formation for the detachment.  Side note, there is a lot of Emperor's whatever formation here, because emperor.  This is similar to the steel host with minor differences, with a Tank commander(squadron) 3 Leman Russ Squadrons, and 1-3 enginseers.  The formation benefits are where this makes a difference.  All tanks within 12" of the commander has BS4.  This is a great buff for most of the leman russ variants, and unless you max out the squadrons, this is pretty easy to keep within range as long as you pay attention to placement.  The next benefit is that as long as a tank is within 6" of an enginseer in this formation and your opponent scores a penetrating hit, he must roll 2 dice and discard the highest, by no means a crazy buff but is surprisingly pretty useful in keep weapons destroyed and immobilization's to a minimum.  The last gives bonuses to tank shock and ramming, for ever tank after the first that tank shocks or rams the same unit, reduce the units Ld by one for every tank after the first, or add one to the S of the ram after the first.  This is not bad, while situational, tank shock and ramming is a lost art in my opinion that can quite useful, especially when facing invisible units or for pushing units off of objectives.

The main take away here is BS 4, and that the tank commanders squadron is always going to have it till he is destroyed.  There is also a Cadian relic that works well here as it has the same range as this buff, more on that later.  With this buff in mind, the tank commanders squadron should be kitted out to take advantage of it, meaning focusing on the non blast leman russes.  Personally, Vanquishers with lascannons go great here, and you should consider having the squadron with the third tank.  This gives you strong anti-tank and anti-monstrous creature firepower, what with knights and MCs being quite common, your going to want this.  Remember this is going to take up a good portion of your army.  The punisher is next to top the list, though personally I would take it in the other squadrons.  Another possible loadout for the squadron is an executioner for the commander, and exterminators for the others, as you'll be shooting with S7 to maintain your target coherency.

For the other squadrons to surround the command squadron, punishers and exterminators are a primary choice.  This gives the formation overall strong anti-tank in the command squadron, and anti-horde/infantry to round it out.  I wouldn't spend a ton on side sponsons, though heavy flamers should be considered to protect you from the inevitable assaults coming your way.  Finish the formation off with 1-2 enginseers with a servitor or two for repairs, and power of the machine spirit.

This gives you a core for the detachment that is well rounded, with enough pts to bring other units in the detachment.  For the Command, you can go more tanks, but a CCS is more cost effective and will synergize better with other units.

For auxiliary you have a couple of good choices.  One route is to take the aerial company formation (3 valk/vendettas) to give you anti-air and transportation, and then finish off with a scion platoon.  Another option is the emperor's blade assault company for Obsec veterans kitted out for objective clearing. You can also just fit an artillery company, though won't be  a large one, mostly 1-2 Wyverns, 1-2 hydras for air support, and manticore and enginseer.

You have options here, to kit the army out to support the weaknesses that the formation has on its own, that being a lack of dedicated anti-air and susceptibility to assaults.  Personally the air wing and scions or the blade company give you bodies for objective taking and clearing units positioning to assault the tanks.

There is one more thing to consider, and that is the cadian heirloom, Kabes Herald.  Its only 20 pts and lets all leman russ squadron's within 12" of the tank commander be able to use his tank orders as well.  You get to choose but this works well with the formation, allowing the whole formation to pop smoke and shoot, go flat out, and split fire.  The heirloom specifies that the order gives the other squadrons split fire.  While by no means an auto take, its something to strongly consider.

This is the best way to use the Cadian Battle Group detachment, pretty much the only way.  It is by no means the best army you can field, but it does have some good bonus when built to consider it over a CAD with this formation added on.  That being said, a CAD + the armored company has some definite advantages as well, which I will go over in a more general tactics section on leman russes.

I know some are going to mention the Steel Host, and it is still a good option, but the focus here is on how to make an army with within the confines of the Cadian Battle Group, not an imperial guard army in general. Though it would have been awesome had the steel host been included in the Cadian Battle Group (it is Cadian), another miss for this detachment by GW.

I'm going to try this army out in the future, once I get my last few leman russes built, so will see how this goes in practice and work on the formation in a non CBG army.

Cadia Stands!
GG
Posted by Grumpy Guardsman at 10:42 AM