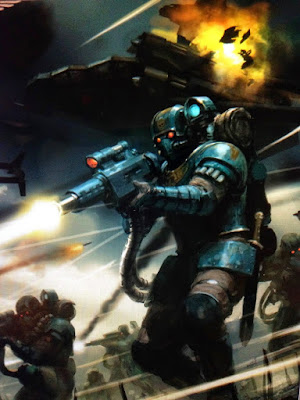 I finally got a game in!  I wanted to test out my theories on the Castellans of the imperium detachment and how much it can help Militarum Tempestus armies.  A buddy that I used to play quite commonly was happy to oblige me, as he wanted to play another highly uncommon solo army: Dark Eldar.  So the Showdown between two of some of the least played solo armies began.
Had a little confusion on pts, but he adjusted his army on the fly to 1850, as I had only models for my army and nothing to bump up to 2000.  He ran a combo of Heamonculus covens and standard DE, having a Heamonculi HQ and two grotesque squads in raiders, a big beastmaster squad, a full up court of the archon, incubi in raider, two warrior squads in venoms, ravager and voidraven bomber.  As far as I am aware he did not have any special relics or anything, just a few normal upgrades for squads.

I took a castellans detachment with three MT command squads, two with plasma and one with grenade launchers and flamers, Coteaz, four scion squads, two 10 man with volley guns, two 5 man with melta.  All the command squads had standard taurox primes, the two ten man scions had tauroxs with gatling and volley, and I had an extra missile taurox.  Finished it off with vendetta and vindicare assassin.  Nothing special on my front either, one plasma pistol on command squad and a power maul.

Things did not go well from the start.  He won the roll off to go first, we had vanguard deployment with big guns never tire mission (extra VPs for Heavy support) which was good for me as I had no heavys, but he only had one so not a major thing.  He got night fight for his warlord, which was a huge advantage as you'll see later.  I got infiltrate for warlord and 2 other units, I should have rerolled to try and get night fight as well but that is life.  I failed both my sieze rolls with coteaz.

Some mistakes I made out of the gate, mostly due to long time since I last played, and underestimating how big a deal night fight on turn 1 was going to be.  I infiltrated the vindicare too far up, and I should have made use of my infiltrate to outflank those units instead of moving them up.  Oh well lesson learned.  He deployed in cover in case of my seize, which never came.  I pulled my left flank back to try and give me space, but I prob should have deployed as far up as possible as I backed myself into a literal corner.

I rolled on telepathy for coteaz and got Hallucinate and invisibility, with shriek with psychic focus.  Though invis did help, I only got it off once.

So turn one came the DE bum rush, he moved everything up minus his ravager and venoms, moving them about to line shots, but also keep back field control.  Since everything basically moved flat out or ran, his ravager fired at my missile taurox but failed to damage it.  A venom shot at the melta squad I infiltrated, but I only lost two of them, considering the 12 shots that was put into them, I was happy with that result.

Now my turn. I was boxed in pretty good, with two raiders  right in front of my vehicles on the left flank and on the right, the two raiders had jumped in front and behind of my tauroxes, limiting my movement significantly.   I moved coteaz's transport back a little and disembarked and disembarked my plasma command behind his other raider.  Though true to form as I fell back on the left, I rolled double 1s for my dangerous terrain test on my taurox immobilizing it and losing a hull point.  My shooting wasn't completely ineffective, but with night fight in effect, The amount of shots I put into his transports meant I was only able to do a small amount of damage.  One success was in destroying his raider carrying his incubi.  But I had to use the taurox and the plasma guns to do it, leaving only the scion squad with a melta to take them down.  With the explosion and scion shooting, I knocked the squad down to the claivex and one incubi.  Coteaz got invis on himself, but I whiffed on shriek on the beast squad.  His squad and taurox fired on the raider, but with 3+ jink, all I got was two hullpoints, though the flamers did kill 3 of the court.  Final success was the missile taurox and vindicare destroying the ravager.   See the pics below

On my left though, things definitely fell apart.  With all my shooting, all I managed was to knock a single hull point off of one raider, oh and kill a plasma gunner even with twin linked.  Yay!  He passed his Ld tests.


Well here came turn two, and he got his bomber in.  It came to support his left flank assault.  His grotesques hopped out, raider moved back (the one that could) and the void raven opened up, doing good damage with it.  His venoms moved around and lined up to kill the assassin, though one immobilized itself in terrain, at least I wasn't the only one failing my checks.  And kill the assassin they did.  Next he lined up for assaults.  His court got quite lucky with shooting though and killed three of my command squad with coteaz despite invisibility.

And the assaults came.  He got quite a few multi-charges, due to his great positioning turn 1 and my crappy positioning. Short story, the grotesques wiped a scion squad, command squad, and a taurox.  No surprise there, though I did fail my flock to the front line roll to see if the troop squad came back. Its only a 5+ so can't complain.

On the other flank he multicharged with the beasts and the incubi and court, with the last two going for Coteaz and his taurox and the beasts going for the melta squad.  The taurox died, no surprise, and the last scion with coteaz died and he took two wounds as well.  Coteaz killed the last two incubi in return.  Surprisingly, the beasts only killed two scions with the sergeant taking out one of the chimera, it had been wounded in overwatch.  But the bastard decided to not fail his Ld check for losing combat, so no shooting those beasts up in my turn.

Alright, my turn two, and no reserves came in, Yay for me!  The writing was on the wall though, things were very bleak.  I probably could have done better but, there was no where to run to.  Anywho, I remembered tauroxes could ram, so tired of jink saves, one rammed his raider, and wrecked it.  Small victories.

Unfortunately with the combats and wrecks, I had no where to go.  I could have hopped my command squad and made a break for it, but even with flat out, I would still have been within charge range of the beasts next turn, though I should have embarked them anyways.

Stuck in my other corner I moved my surviving squad in my remaining mobile taurox and moved away from his grotesques.  The Missile taurox lined up on his immobilized  venom and blasted it.  Taurox fire killed a grotesque.  Oh and coteaz whiffed hard, invisibility did not go off, and hallucinate did nothing.  Go go psychic phase.  He died.  So did the remaining sergeant in with the beasts.  But the squad came back, oh boy.

He was in final mop up phase on his third turn, moving his grotesques to assault the missile taurox and the other jumped over to where coteaz had been as on objective was there.  The bomber finished off the immobilized taurox and the court and beasts finished the command squad and taurox.

My turn and my reserves came in along with the returning squad.  Deepstriking in his back field with one melta squad, the other went near his raider.  The scatter wasn't great, but stayed in melta range.  The vendetta lined up on the raider as well.  The bomber had fired its one shot weapons, so was just down to its lances, a threat to the vendetta but not much else.  A melta squad brought down his remaining venom, killing three of the warriors inside, and the vendetta killed the raider, and the melta squad killed a grotesque.

At this point we called it.  Could have played longer, and if I got lucky I could have got a few of my remaining squads to come back, but at this point I really would have to get lucky to not get tabled.  In either case, I had dinner plans, and it was not close enough to risk running late.

Lessons learned is that I need to pay attention to deployment better and should have made use of outflank.  Also, as much as the vendetta fits the theme of the army, two hydras would have been far more practical and cheaper.  Coteaz is good and will keep him, but might consider other options as well.  Need to be far more careful with the assassin, as he can't take volume fire.  But I'm not writing him off as I need ignores cover, and he has it.  I'll be tweaking the list for sure, but really MT lacks a lot of tools to really face off against a lot of foes.  I have a few ideas and there will definitely be a rematch soon.

Cadia Stands!
GG
Posted by Grumpy Guardsman at 11:03 AM