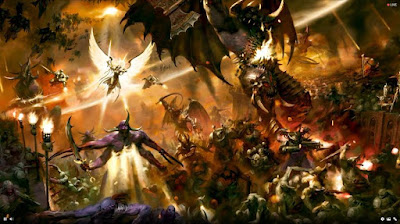 Today, going to take a break from looking at rules and soak in all the recent changes, both fluff and crunch, and the road ahead.  GW is not a perfect company, but in my opinion they have done a great job of turning things around in the last few years.  With large amounts of Fluff armies finally seeing the table top, and with supplements to help a few armies out, to doing something with the 40k timeline.  There will always be those that will hate on anything GW does, but I think most of us can take an honest look and appreciate all the good they have done, while still calling them on their crap when its justified.


For me, I think this is one of the best times to be in 40k.  Think about it, we've had Ad Mech released, Deathwatch, Harlequins, Genestealer cults, Knights etc.  Things that have been in the fluff for ages have finally seen the table.  Not every release has been a home run, and certainly weren't power builds.  But that isn't a bad thing, there are certainly enough power armies that I would much rather see less than more.

GW has released fluff story arcs, that have sort of moved the story.  Now these haven't been the best, from Mont'ka to Wrath of magnus, the stories in these have been lacking, but they were attempts and I'll give them that.

They have started to address some of the problems they have created as well.  Look at Traitor Legions, Chaos players have been crying for this for ages, and it has come and really rejuvenated chaos armies.  Also detachments have been more balanced as of late, having good benefits but some of the crazy of the early formations and detachments have started to die down.  Personally I am a fan of formations and detachments when done right, and they have been doing better, not perfect but better.  Really if Chaos Deamons and Eldar get new codex's that tamp down their power, we will see a lot of variety flourish, as they really are the main power dex's at the  moment.

Now we have the gathering storm series shaking things up for the coming of 8th edition and I am a fan.  The fluff could be better, but to be honest, its a lot better than their past outings (looking at you Mont'ka).  A primarch is returning, and maybe we'll see some characters bite the dust, which I really hope happens.  The biggest problem with a lot of the fluff stories, is that there is no stakes, we know no one major is going to die, so why care.

8th edition is rumored to pair down the complexity which is a welcome change.  I would love to see some of the psychic disciplines paired down, especially summoning as it has really affected the game with how much units you can bring in for free.  I don't expect to see all the randomness go away though, though hopefully a bit less and keep it to the pregame part (warlord traits, determining psychic powers) and a bit less random tables to roll on during the game will save a lot of time.

Of course there are detractors that are opposed to any movement in the story, which I don't understand as many are the same people who will pine over the "good ole days".  You know the days were rules were released in white dwarf and campaigns ("complicating the game!"), the story was advanced in campaigns and events ("ruining the fluff"), new armies were released ("power creep"), etc.  Its the grass is always greener syndrome, either side of the fence is basically the same, but one thinks the other side is magically better.  The good ole days had as many problems as we have in the hobby now, there was no magical perfect time in 40k where everything was balanced and the fluff was perfect.

The point is, you can't have it both ways and claim to miss the good ole days, while rejecting those same things happening now wholesale.  Criticism of execution is absolutely valid, but broad rejection of the same thing you loved years ago is a bit hypocritical.  GW still has a fluff writing problem, and while the gathering storm is much improved, it is not perfect.  But a lot of that is the contradictory fluff over the years, especially once they stopped moving the story, they had to keep recycling without really moving the story, so things became convoluted to say the least.  Hell look at the blackstone fortress, and I will give gw props for basically getting rid of them in fall of cadia.  Its an admission of past fuck ups while moving forward best they can.  It won't be perfect, they have quite a few Gordian knots to unfuck.

Overall, I am excited, things are moving in the right direction.  New armies, new fluff, and boxed sets that actually offer saving have returned.  I am more interested in how the story will play out than I have been in years.  This won't be age of sigmar, GW has way too much money at stake to complete redo an entire setting from top to bottom.  As much as sigmar has been maligned, its been a success financially, at least when compared to fantasy, though only marginally at the financials released at this point.  But fantasy was dead, 40k is not.  While 8th will certainly bring changes to the rules and story, we will not see the end of 40k for some new sci fi universe.

Good things are coming, and probably some bad, but thats life.

Edit: lets also not forget the return of GW to social media and actually engaging with us and answering questions and comments and releasing FAQs finally.
Posted by Grumpy Guardsman at 10:53 AM