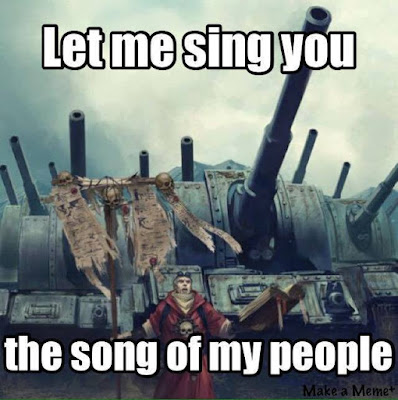 While the Cadian Battle Group is overall not that great of a detachment, many of the formations in Mont'ka are quite good and something to take with a CAD.  The Emperors Wrath Artillery Company is probably the strongest formation in the book, especially with how flexible it is and what it brings to the table given the current meta.  You can build a very good formation out of this and still have plenty of pts for your CAD to round your army out.

The formation itself is composed of a CCS in a transport (so a chimera), 2 of either basilisk battery, Hydra Battery, Wyvern Battery; a Manticore or Deathsrike, and 1-3 Techpriests.  The CCS can issue orders to all vehicles on this formation, but only three specific orders, that being the Ignores Cover order, the Pinning order, and the split fire order.  Note that he can still issue orders as normal to infantry units.  The formation also has taget sighted, which gives you a once per turn ability for any friendly model in your army equipped with a vox caster to nominate a unit within 18" and all shooting attacks from this formation are twin linked against that nominated unit.

Why is this formation so great?  Well it answers many of the threats you face.  Eldar Jetbikes, well Basilisks are S9 AP3, and now can ignore cover, so good buy jetbikes, and also space marine bikes.  Wave serpents, flyers, flying deamons, hive tyrants, are all common threats, and here hydras come with again being able to gain ignores cover.  Manticores and deathsrikes also.  If the unit has no cover save, well now you can pin them.  And if you need to split fire you can do so, and also you have techpriests, so if you really need your basilisks to ignore cover, but need to hit multiple targets, well power of the machine spirit to the rescue.

And Basilisks and Manticores are good all rounders as well, with high S they can strip hull pts of vehicles and good chance of penetrating a vehicle.  They won't be one shotting a whole lot of vehicles, but you still have the rest of your army to build around this.

Now the Wyvern is a great vehicle, but it is a waste in this formation.  Mainly as the Wyvern is already ignoring cover, and twin linked.  There is little support a wyvern needs, which is why it is such a great unit, its good all on its own with only some infantry protection to keep assaults away from it.  The rest of these choices though become significantly better in the formation.

The orders are by no means an auto pass, as the vehicles count as Ld 8, so while you have a 3/4 chance of your orders going off, its still not a super reliable thing.  But there is a relic in Mont'ka that helps you out here.  Volkov's cane is only 10pts, is a S user Ap4  concussive melee weapon, but it also makes all your officers orders only fail on a double 6 as long as the ordered unit is within 6".  And to be honest, regardless if you are taking this formation, this is one of the few auto-take relics, as long as you don't have any non-cadian characters in your detachment.

How I would build this formation is 2 Basilisks, 2 Hydras, a Manticore, and 2 Techpriests, with a CCS in chimera.  For the CCS, I would keep it simple with the Cane, and either 4 flamers or meltas.  For the CCS, I would kit the special weapons based on what your meta is.  If you are facing a lot of Space Marine or 3+/2+ equivalent that are deep striking or outflanking, then meltas are the choice to go with.  If its more of genestealers or equivalents then flamers are the choice.  You want to be able to respond to your opponent going after your artillery, flamers are the cost effective choice with meltas good for taking out heavy infantry.

With that done, you can handle a lot of the threats in the game now.  Next thing you'll want to look at is how to protect your gun line.  Here there are plenty of options to choose from, as you can not go wrong with a few infantry platoon blobbed up with lascannons or autocannons behind an aegis defense line.  Finish it off with some deep striking scions with melta and plasma and then possibly some psyker support and priests or commissars for morale control.

Instead of scions you can also do some vet squads in chimera with plasma and melta to go hunting.  You could also through in a few vanquishers for dedicated anti-tank.  There are a lot of options.  Instead of a blob based list, you could also go the mechanized route with either infantry platoons or vet squads in chimera's or tauroxes.  With this you can adopt a hammer and anvil approach, using the artillery as your anvil.

In short, this is one of the strongest formations we have access to as guard.  It answers a lot of the problems that we face, with you only really needing to figure out how to deal with monstrous creatures and superheavies, which you can build into the rest of your army.  If you have the models, you should be taking this formation.

Cadia Stands!
GG
Posted by Grumpy Guardsman at 11:37 AM