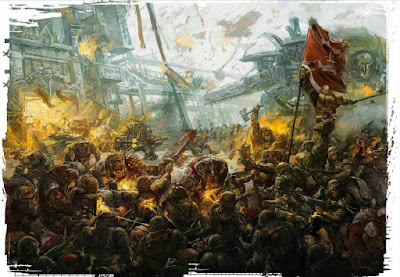 I have been re-looking at the Mont'ka book and the Cadian battle group and the formations.  It is definitely the case of the usual GW, so close to getting it right but so far away from getting it right.  It certainly has a few applications for working, but overall the detachment itself misses the mark.


For those not familiar, the Detachment is composed of a Command Group Choice, Core, and Auxiliary.  The command is technically the only compulsory choice, so you could just do that, but eh, not really great option.  For each command, you can take up to 3 core, and for each core 3 auxiliary.  For the Battle Group Command, you must take either a company command squad or tank commander, and can take 0-1 lord commissars with this, which is one of the few places to get them in this detachment.  You can upgrade to the Cadian special characters in the command group (Creed, kell, Pask)  and note you cannot do this in the other formations in this detachment. There are two Core choices, the Infantry Company and the Armored company.

Here is where this detachment breaks down.  You can certainly make the armored regiment work here though, but that is really the only good way to run this as the infantry company is just way too expensive pts wise and money to build and leaves you with very few options unless you are playing Apoc games or really large pts values.  Lets face it, most of us play in the 1600-2000 pt range, simply for the sake of time, and as its the common pt values for competition.  I don't know about you, but I don't have 12 hrs to play a game, and a 1850 can easily run 3+hrs so going big to make this detachment work with the infantry company is not going to be an easy option.

So lets break this down why this is so.  The company is composed of Three Emp Shield Infantry platoons.  These must have 5 infantry squads (thats 55 guardsmen with the Platoon command squad) and either a scout or armored sentinel squadron.  There are some special rules which I can go into later.  But lets break this down.  So minimum 150 standard guardsmen, 15 in the PL squads, and 5 in the CCS, plus another CCS in the Battle Group Command.  With nothing added, thats 1,065pts.  a 1000 pts of lasguns.  This when kitted out to actually be useful, will easily go to 1850pts.  And as interesting this army might sound, it just is so inflexible and really is not going to be able to really do a lot.  And it really takes out of the picture some of the really good auxiliary choices, like the artillery company, to support it.  You certainly can take it in its cheapest incarnation, but then you are losing a lot of potential that the artillery company has.  Also if you go the armored route, you are losing a lot of the command benefits of this detachment.  You are damned if you do, and damned if you don't.

All the command benefits for the detachment benefit infantry.  The Company commander from the Battle group command(but only him) can issue 3 orders instead of 2, and up 24" rather than 12".  Again this is only the CCS taken as your command choice, so all your other CCS will not benefit from this specifically.  The next benefit is that whenever any officer in this detachment issues an order, roll an additional dice for the leadership check (3 total) and discard the highest.  The last benefit lets you reroll all to hits of 1 for lasguns and hot-shot lasguns.  As you can see, no real direct benefits for going full tank mode, though the formation itself has quite good benefits.

I have thought and thought about this, looked at list building, but I just cannot come up with a really good army using the infantry company.  And lets be clear, you can make an army out of the infantry company and not be terrible, but not being terrible and being good are two different things.  It will certainly work well against a few armies, but bear in mind you are leaving behind priests, primaris psykers and tech priests, besides a few formations but the crux of this is that you'll have to be able to have enough pts to take these formations.  Commissars, per the codex and detachment rules and FAQ, are still able to be taken.  But again you are limited in your options for moral control and support.

Also, no fortifications.  You'd have to take a CAD as well in order to get a fortification, which is a big deal for infantry armies.  What really could have made this detachment be a real option, outside tanks, is if one of the auxiliary choices was moved to core, that being the Emp Blade assault company.  Which is a CCS, 3 Vet squads, and a Hellhound squadron.  All the infantry have to take dedicated transports and the formation has preferred enemy when attacking units within 6" of objectives and the infantry units have Obsec.  This is a solid formation.  And if it was a core choice, you could absolutely use this detachment and actually be able to take many of the other formations and unit choices in the auxiliary section and build a really good army out of it.  Suddenly you have enough pts for the artillery company, a recon company, the psyker division, not to mention a normal infantry platoon and tempestus platoon which are also auxiliary choices.

You are probably wondering why I keep mentioning the artillery company, well thats because it is quite good.  It is a CCS in a transport (chimera really so you can issue orders inside)  2 units of either Basilisk batteries, Wyvern batteries, Hydra batteries, 1 of either a manticore or deathstrike, and 1-3 enginseers.  The benefits though are what make up for it.  The CCS can issue orders to all vehicles in this formation, but it only can issue three of the available orders.  Those are smite at will (split fire), suppressive fire (pinning), and fire on my target (ignores cover).  All vehicles count as Ld 8 for passing orders.  Also note he can still issue all his available orders to infantry units as well, but yeah this is all about amping up the artillery.  The last benefit is that once a turn any friendly model in your army (not just detachment) that has a vox caster and is within 18" of an enemy unit can call in its coordinates giving every unit in this formation twin-linked against it.

While this doesn't do much for Wyverns, as they already have twin-linked and ignores cover, it really helps out Hydras, Basilisks and Manticores.  Like not just a little, but a lot.  Basilisks have taken a back seat for the most part, but S9 AP3 large blast that can now ignore cover, is damned good.  Plus the same for hydras, shooting down wave serpents and flying deamons, no more jink for you asshole.  I really like the synergy of this formation.  Best loadout for me is 2 Basilisks, 2 Hydras, Manticore, and enginseer with 2 servitors for repairs.  Now here is the problem with this fitting in to this detachment.  If you take the infantry company and even upgrade it a little, the best you can do is 1 hydra, 1 wyvern, 1 manticore, the CCS and enginseer.  Its not terrible, but your not maximizing its uses.  And I would rather take a CAD for the rest of my army and then take this formation, you can do a lot more with your army that way.

The infantry platoon, and company, is not terrible in a vacuum.  As stated its 5 infantry squad, 1 PCS, 1-3 sentinel squadrons(either type).  All infantry units get move through cover if within 9" of a sentinel from the formation.  eh.  The platoon commander can issue a special order, fire and advance, which allows a unit that moved to fire as if it was stationary.  Thats not bad for a blob squad with a lot of heavy weapons.  Note this is not relentless so no assaulting unless you only fire assault weapons.  Restrictions, you can't take dedicated transports, and as stated must have 5 infantry squads.  The ability to move and shoot heavy weapons is not bad at all, but not really game changing.  The full company is three of these platoons and additionally the company commander can issue first rank fire to any number of units in this formation at the same time, but it counts as one order and all those ordered units must shoot at the same target.  I mean its not bad, but if you are blobbing up, not much of an issue really.

I'm going to continue going over this detachment and the formations throughout this week.  And you know what, I'll take another crack at the detachment with the infantry company and see what I can come up with.