Fall of Cadia: Castellans of the Imperium Detachment 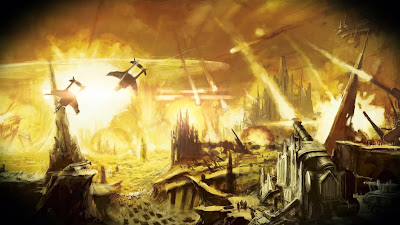 Continuing off of yesterday, I'm going to continue looking at the Castellans Detachment, with a specific focus on Miltarum Tempestus and why it helps this army out so much.  MT is not a bad army per say, but due to exclusion of a few units, one in particular, and lack of senior officer, the army has significant weaknesses that need to be addressed to play in the current game and stand a chance.
First up lets go back over the basics of the detachment.  Minimum 2 Hq and 4 troops, Optional is an additional 2 Hq, and 0-6 for Elites, Fast, and Heavy, with 0-3 Lords of war (knights, baneblade variants only) and as many more troop choices as you want.  The Detachment gives Hatred (zealot if maxed out/not happening), reroll warlord trait if primary detachment, and if a troop unit is killed, it returns to ongoing reserves on a 5+, and the same applies to the returned unit (theoretically allowing it to return unlimited number of times till the game ends).  How this applies to dedicated transports that troops take is not clear, but I'll just assume for now that they don't, but the argument for them returning is just as valid so come to an agreement with your opponent before hand.

The kicker is that this detachment can be comprised of any combination of units from Astra Militarum, Militarum Tempestus, Space Marines (vanilla only), Sister, Inquisition, Assassins, and can take Celestine and Inquisitor Greyfax.  Its important to note that this detachment must include units from at least two different Factions, so no you can't just take all Astra Militarum units, you'll have to include at least one unit from another faction, but this is easy and really why wouldn't you.

So why is this so beneficial to Militarum Tempestus specifically?  Well it allows it to take units to fill out its weaknesses without having to waste points on filler for things like allied detachments or formations.  On that, I should talk about MT's main weaknesses.  First is its lack of dedicated anti-air FMC/ranged anti tank.  Second is its lack of ability to really counter psykers.  And third is that without senior officer special rule, you are limited in using their really good orders.

So what to take.  Well obviously 4 scion squads and 2 command squads.  Loadout?  I like having two 5 man scion squads with melta guns for deep striking or riding in vendettas.  Speaking of vendettas, now they are easy to get without having to bring a formation or ally.  How many?  I would start with one, at most two unless you are going all out on an air force army.  This is really great, as if all you want is one vendetta you can now take it and not have to take a formation or ally detachment.

Rest of the squads would look at plasma guns and hot shot volley guns, I like to run at least two full ten man scion squads with either plasma or volley.  Then pick up a third command squad for the extra order.  I like having one of my command squads kitted for CC, so usually a power weapon like an axe or maul, and assualt weapons for the squad, flamers and grenade launchers if pts are scarce or meltas if pts available.  I know most don't think of guard or scions in CC, and while they will not stand up to the hard core cc units in the game, they can certainly pick on quite a few troop choices and other units that don't do well or are mediocre in cc.

So what else?  Tauroxes for one, as you'll need the fire power and mobility.  I really like have two standard tauroxes with battle cannon and ACs, Two with gatling and volley, and one missile.  I have tried going air force heavy, but tends to leave too few on the board first turn and units arriving piece meal to really affect the game.  You really need to get close in with this army quickly as it has very few weapons beyond 24".

The next part is where you can really play around with this detachment.  You have marine and IG units to pick from, Inquisitors, Assassins, sisters, you name it.  On inquisitors, I would say that the standard ones tend not do a whole lot and though servo skulls are good, I would say that if you are going the Inq route for an HQ, its either Coteaz or Greyfax.  Coteaz is still a great choice for an all rounder and is a great choice for pounding units and as a force multiplier.  Greyfax is slightly better psyker with one more power(a very good one) and is significantly better at killing psykers and defending against them.  So for general all rounders, take Coteaz, for anti-psychic support with also general force multiplier abilities, definitely take Greyfax.  If you really just want a beefy CC unit, then Celestine is also a great choice and she will attract a lot of fire away from your squads, while still being able to keep up with your transports.

For cost effective Hqs, you have lord commissars and primaris psykers.  Lord commissars have great leadership buffing abilities and are no slouch in CC, and since he is taken from AM he can take relics from either AM or from the Fall of Cadia book itself and there are some good ones though expensive.  The Casigator is a S4 AP 2 pistol that ignores all invul saves for 15pts, Not as strong as a plasma, but ignoring Invul is no joke.  Also there is the Blade of the worthy with has a normal power sword profile for the first round of combat, but for the second you take a leadership test and if passed, it is +2 S AP2, which is really nice.  Its 30 pts, but for a certain build it is worth it.  Last one that I would consider is Desvalle's Holy Circle which grants a 4++ and no unit may deep strike within 12" of the bearer and if they scatter within it, they automatically deep strike mishap.  Its 35pts but again, for the right build is definitely a good option.  If only Tempestor primes could take relics!

Lord Commissars and primaris pyskers are great budget choices, allowing you to get psychic powers or leadership buffs and cc ability without having to spend a ton which should not be overlooked.

Assassins are something that I really want to play around with, as they have very solid rules and abilities and can shore up weaknesses in different imperial armies.  Personally I really like the vindicare but I haven't played with him a lot to see if he is worth it.  If you aren't taking Greyfax, a culexus can take care of your psychic hunting needs if that is what troubles you.  And I really just like the simplicity of the callidus, just run into combat and lawn mower units.

Now this detachment does not just benefit the Militarum Tempestus.  If you want to run a troop heavy Imperial guard army, well this is also a great choice.  Though there is less outright benefits as the imperial guard is already pretty well balanced, it does give you access to cc units that aren't Ogryns.  Been wanting a thunder hammer termie squad, and only that, well now you can.

For the Astra Militarum, main benefits of this detachment are the returning troop choices (on +5) and the ability to add a few key units without having to pay much of a tax for it.

I know some might think this detachment is overpowered, and it probably can be, but its important to note it does not have objective secured, which is no small thing.

Oh and Knights, lets not forget knights.  Though allying a knight detachment with just one is already possible, so not really a major benefit other than easier book keeping.

Really, I don't see this detachment becoming super popular.  There are a few armies like sisters and MT that can really, really benefit from it, but for AM and Space marine, I don't see this often replacing what is already being used.

Cadia Stands!
GG
Posted by Grumpy Guardsman at 11:33 AM