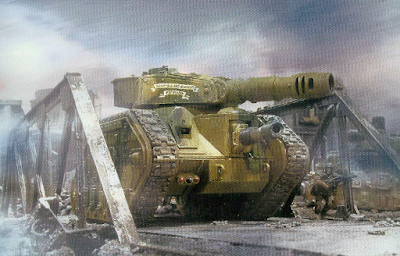 The leman russ, the iconic tank of the Imperial Guard.  Its reputation is quite mixed, but with all the options available, it has definite uses on the battlefield and can perform well given the chance.  Now the ordnance rule does disadvantage to the two classic leman russes, the standard and demolisher.  But each variant has a place and should be considered.

Ordnance is not a major issue for the Leman Russ, as stock it is still firing a S8 AP3 large blast, yes its other weapons are snap shots, so don't bother with upgrades.  While 150 isn't the cheapest, once you upgrade many of the other variants, its comparable.  Also, in my opinion, sponsons are point sinks, with uses on some tanks, but you need to really consider why you are adding sponsons and if they are really needed.  The only real loser is the Demolisher, not because of ordnance necessarily, but because it is 170 pts, and even if it could fire all its other weapons normally, it still would not be a great choice for the points.

For standard russes, a pair un-upgraded can sit back and fire large blasts to target infantry and the occasional weak vehicle.  They aren't exceptional, but they wouldn't be even if they could take sponsons and fire them normally.  They are a unit you don't really have to think too hard about.  Give them good line of sight and start shooting.

The Eradicator is dirt cheap at 120pts and has a 36" S6 AP4 large blast that ignores cover.  Its solid and cheap AV14.  It won't counter a lot of the meta though, as most of the things that are the biggest threats (eldar/SM bikes) have a 3+ armor save.  So no cover, but still durable, and your not going to be able to double out their T either at S6.  Their best use is as a line breaker, since their range is relatively short, they are going to move forward.  They are definitely cheap so a few upgrades are worth it.  Two good options for their side sponsons are either Heavy flamers or plasma cannons.  The heavy flamers synergize the best as it gives you more AP4 ignores cover and helps protect the tank from assaulting units.  The Plasma gives you AP2 firepower, with risk, though it won't ignore cover.  Extra armor should be considered for this tank as well, to keep it moving.  While its not a throw away unit, its cheap enough to throw forward with infantry support and not think too hard on.

The Exterminator is one of my favorites, its 130pts only and has a twin linked 4 shot autocannon.  The great thing here is that because it is already twin linked, it doesn't really need psychic support.  Its the all rounder, capable of hurting a lot of units and doesn't need another unit to buff it.  A pair can be kitted out to focus on light vehicles or infantry.  Basically, kit it out with a lascannon for a little extra vehicle punch, or keep the heavy bolter and add two more for infantry killing.  Going all heavy bolters is 10 pts more than just the las, but is still only 150pts.  A pair of these tanks just do work.  They hunt light/medium vehicles, medium infantry with ease and can even fire at air units in a pinch, 8 twin linked shots will get you a few hits, and getting a flyer or FMC to jink is not a bad thing.

The Vanquisher is another of my favorites.  It is only 5pts more than the exterminator and has the vanquisher battle cannon.  It is S 8 Ap2 and armorbane, with the same range as the normal battle cannon.  With armor bane and AP2, it has a good chance of doing real damage to vehicles with immobilization's or weapon destroyed.  Upgrade the heavy bolter to a lascannon and take a squadron of three.  With the MCs and Super heavies in the game, it gives you one of your best long ranged anti-armor options.  The downside is BS 3, but there are answers to fix this.  The first is prescience to twin link the squadron.  This really is a must to get the most mileage, so consider that in your list, but a squadron will reliably kill most vehicles a turn, outside of superheavies and land raiders. You can add side sponsons, but since these work best in 3s, save the pts for the primaris psyker.

As already stated the demolisher is not the best.  Its 170pts, which is it's main issue.  Even if it wasn't ordnance, upgrading it makes it even more expensive.  Only way I could see taking it is in a squadron with eradicators, as both want to get close.

The Punisher is a common tank to see, and for good reason, though I think its a bit overstated in its strengths.  Its 140pts, making it still cheap enough to upgrade to heavy bolters or heavy flamer.  The Gatling cannon is 24" S5 no ap heavy 20.  The 24 inch range and S5 is the downside and really limits the threat it can bring.  This is a specialized tank, so try not to make it an all rounder, as there are better choices in the leman russ category.  It has one real use and that is killing infantry, so heavy bolters for range shooting.  But since it has such a short range on its main gun, and with short movement, it can easily be charged and assaulted if you are not careful. Heavy flamers is a good choice to mitigate units that get close to assault.  Its a good tank, but has limitations and tends to get a round or two of shooting before being assaulted and wrecked.

The executioner is the last tank, and its a fun one with its special plasma cannon that fires 3 blasts.  Gets hot is an issue, but you can mitigate it with certain choices.  This tank goes well with exterminators, as the autocannons and plasma have S7, so they can shoot the same targets without worry of wasting shots.  Main issue with this tank is losing hull points from gets hot.  Having a techpriest or two for repairs is going to be something you are going to strongly need to consider.

Most of these have solid uses, but only a few really synergize well together.  The exterminator and executioner, and the eradicator and the punisher are good pairs as they threaten similar targets together.

Now there are a few things available to consider.  Mainly the two formations, that being the Steel Host and the Cadian Armored Company.  I will probably do a breakdown between to two to show the full advantages, but to sum it up, the Cadian Armored Company is better in the majority of situations.  The exeption is for Plasma tanks.  The steel host grants preferred enemy to all leman russes within 12" of the command tank.  This will give you a reroll of 1s on your gets hot.  This will keep your plasma tanks from hurting themselves for the most part.  It does have an organic hydra (only one though) to give the formation some anti-air.  Other than that, the Armored Company is superior.  Instead of Preferred enemy, it grants BS 4 to all Leman Russes within 12".  In addition if the techpriest in the formation is within 6" of a tank that suffers a penetrating hit, your opponent rolls two dice on the damage table and discards the highest.  They also get a bonus to tank shock and ramming, -1 Ld for every tank after the first that tank shocks, and +1 to S of the ram for every tank after the first.  The simple fact is that BS4 helps out a lot more of the tanks than preferred enemy.

Basically, if you want a lot of plasma tanks, go with the steel host.  If not, go with the armored company.  Both are good, the company is just slightly better in most situations.

Command Tanks will be a separate post.  The issue with the big formations is that they are a lot of pts, and there are a lot of fast moving threats that can munch leman russes.  In most situations, a 2-4 leman russes is the sweet spot in terms of effectiveness.  I like a pair of Exterminators and a pair of vanquishers.  Primaris psyker buffs the vanquishers and the exterminators can move freely to hunt targets.

Punishers work well chewing through weak infantry, but will struggle against things like marine bikes.  The eradicator is not bad, but with a lot of things on bikes have a 3+ armor, its effectiveness is limited.

Leman russes need support, bubble wrap with infantry to prevent deep strikers and to meet charging units.  If you are going mobile with them, have infantry in transports to support them, though walking troops can be done as well as russes are slow.

The short of leman russes is that, there are quite a few good choices, but none that are really excellent and game changers.  AV14 is great, as there are not a ton of high S weapons with long range in the meta, with most being S6 and 7, that being said, there are a lot of deep striking melta and fast moving grav that will have to be dealt with.  They won't be invulnerable.  They are good, but need support.

Cadia Stands!
GG.
Posted by Grumpy Guardsman at 9:52 AM