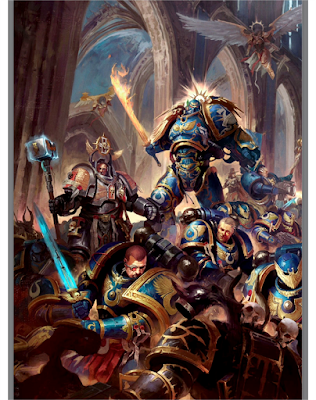 I got the book last night, and did not put it down till I read the whole thing.  I won't go over the rules too much, as there is nothing that really interests me, though G-man has some interesting potential.  The story though is satisfying, though the best parts are the beginning and end, the middle meanders a bit but overall not the worst storytelling ever.

Thankfully the story doesn't waste time with telling us the travels of the Ynnari and the Celestinians through the webway.  They all met up in the last two books and agree to head to Ultramar, so rather than creating some contrived travel story, they jump right in, with them exiting the webway on Laphis, a shrineworld in the Macragge system.  They decide this as they might be favorably received popping up on the Ultramarines homeworld all of a sudden.

All is not well as Abbadon has sent forces to tie the ultramarines up and presumably stop the merry band of heroes from completing their mission.  They clear out the chaos forces attacking the local stronghold and make a strained introduction to the ultramarines, but are able to relay their message to the local ultra boys and are able to hitch a ride to Macragge.

Macragge is under heavy attack, primarily the fortress of Hera, which is also where G-man is enshrined.  The merry band makes it through to the fortress and are greeted and taken to a round table of the Ultramarine special characters.  Tiggy sides with them and convinces Calgar to allow them to go to the primarch.  When they arrive though, Calgar is a bit pissed when he hears the details of their plan and is about to arrest them when a thunderhawk crashes into the sanctum, bearing raptors who plant an icon/homing beacon and proceed to jump about attacking the imperials.  Then the fight escalates as terminators teleport in and Calgar and his veterans, along with the celestinians attack them.  To calgars horror, he sees Tiggy assist Cawl and Yvraine despite his orders to stop them.  Cawls reliquary is put in place and yvraine cuts the life support, as the G-man must first die in order to be resurrected.  Then a whole company of black legion drop in via pods, turning the fight in their favor, with sorcerers battling tiggy and trying to bring down the whole building.  Voldus teleports his fellow grey knights in and they join the fight, but the tide is still against them and calgar is beaten down.

Then the reliquary unfolds and behold, G-man is alive and well in a new suit of armor.  He then proceeds to murder just about everything.  Also there is a great moment in here where Greyfax and Celestine resolve their differences, the resurrection convincing her that Celestine is truly a part of the Emperors will.  Its a good moment and I will say there are a good number of these sprinkled throughout the story.

With his awakening, G-man rallies the defenders and basically turns the tide of the battle, coordinating the counterattack and in short order clearing the fortress of all chaos forces.  What I like bout most of the story is that G-man does not become a mary sue, though he continues fighting and defeating chaos forces, its not an instant win and the securing of the Macragge system takes months and losses are inflicted, no clean perfect wins.  He is a primarch and as such a near unstoppable but, he doesn't just point and the war is won in a day.

He consolidates his position and assembles his forces to clear Ultramar from the chaos assault and there is some good portions where he comes to terms with the Imperium as it is.  And first to tempt him is his brother Fulgrim, sending a servant in disguise as an imperial official who crowns him with laurels, where he is tempted to essentially become a despot.  His thoughts of deposing his father jolt him and he removes the laurels and seizes the interloper, though hearing the mocking voice of his brother through the laurels.

His crusade to pacify his realm begins and its a good part of the book, with the weepers being infected by nurgle and though they are initially cured by G-mans presence, once he leaves the plague returns.  Voldus knocks some sense into him, basically stating that nurgle is toying with him to keep him tied up in ultarmar.

G-man then decides to head to terra and launches his crusade.  This part does drag on, as they get sent into the Maelstrom by magnus, then eventually captured by fateweaver and the red corsairs.  Fateweavers plans get ruined when khorne shows up because he just wants a primarch skull.  At this point, harlies show up with Cypher, who frees the captured crusaders, and G-man agrees to take cypher to terra.

They escape into the webway and make for the throne world, though they realize that the thousand sons are on their tail and that Magnus had planned for the primarch to escape, that he wants to follow them to terra.  The harlies reveal that there is a portal on Luna and they make it there with the Thousand sons close on their heels.  They fight on the moon and do well initially until Magnus shows up and goes super saiyan and makes his rubric marines invulnerable and then the brothers showdown, with the G-man slowly losing ground with nothing to counter all of Magnus magic.  But  the battle has drawn the attention of Terras defenders and the Custodes and Imperial fists drop in, along with a force of the Sisters of Silence, who join with G-man and protect him from Magnus.  The battle continues and eventually Magnus is driven back into the portal, with the Harlies cutting the portal off at the exact moment, with it being inferred that magnus has now been trapped deep within the webway.  The last of the thousand sons are finished off and the primarch is taken to Terra.

There is some politicking and the usual grim dark scenery of the masses of humanity, but they make it to the door of the throne room, where the custodes announce that only the Primarch will be allowed to see the Emperor.  Cypher is pissed, but the custodes close in too quick and he and his fallen are captured.  He of course escapes, but that is the end of his mention in the book.  The interesting part is that G-man recognizes the sword he carries and it fills him with dread and that he would never allow it to be brought within the presence of the Emperor.  Based on this new info, I wonder if this is possibly the laer blade, the one that corrupts fulgrim during the heresy, probably not, though I can't think of another sword that G-man would recognize and be filled with dread over.  Probably will never know.

G-man take control of the High Lords of Terra, kicks a few of them off and replaces them with ones handpicked by him and basically sets things up for the counter attack against the black crusade.  There a lot of little hints at the end, with the mechanicum being hinted at just about to complete some major task and new weapons being built.  New ships and forces are being assembled.

Overall, I liked the story, I feel it does the primarch justice and really captures the man out of time and the pain he feels seeing the imperium as it is.  He does not become a mary sue, he has his flaws that are exploited by chaos and through it all overcomes.  Its not a masterwork by no means, but probably the best written of the three Gathering Storm books.

Though nothing massively shattering has really happened, its set things up for the story to continue, with G-man marshaling the imperial forces to stand a fighting chance against the black crusade, the Admech is set up to do new things, and cypher is now on terra, though it remains to be seen what will happen with him.  Really not much they can do with him, as revealing his purpose and and the mystery ruins the character, so his story would have to end at that point, and GW is not about to end the story of a model they just remade.

As for the rules, there are some interesting things here.  The fallen have a formation that gives any of the fallen squads stubborn and And They Shall no Know Fear when within 12" of him.  The grey knight formation isn't bad, as long as one squad casts banishment, its affects are resolved as if all the squads in the formation had.  The rest is Ultra marine focused.  I'll prob go over that later, but I don't plan on running the primarch so will save that for later.

I recommend this book, as the story is the best of the three, and one that is probably worth having.