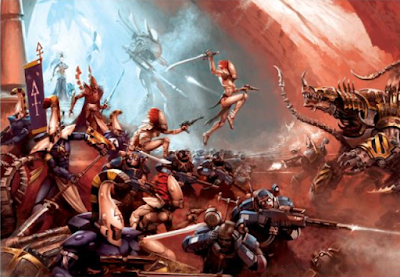 With the gathering storm series at an end, I want to go back and to take a look at the Imperial Characters again and go over the strengths for an Astra Militarum or Tempestus army.  There are quite a few good options and a couple are just ok, but workable.  I won't go into details of each statline or special rules as I have already done that in previous posts.
From the first book we have three solid characters in the form of Cawl, Celestine, and Greyfax.  Greyfax is the cheapest at 150, the others are 200, but all are pretty reasonable for their price, though I think Greyfax is a little spendy for what she brings, but still doable.

Cawl, is simply a tank, and good in close combat, especially against weakly armored low toughness hordes with his mechadendrite hive, plus having a power ax or arc maul.  And his pistol is great.  The big thing, or two really, that puts him a step down as an IG choice is that he is best when he is warlord, so that he can reroll his FnP, but you could still take him as an HQ and someone else as warlord.  I personally almost always want strategic traits.  The other knock against him is the Canticles of the Archmagos.  At first it seems great.  But it only has a 12" bubble, which while not tiny, still means if you want him to be buffing your vehicles, he has to baby sit them, and the vehicles will need to stay relatively clumped up, making them susceptible to high strength low ap large blast weapons.  And unfortunately he cannot repair or give Power of the Machine spirit out.  The other main problem is that you are going to need quite a few Cult Mech units to actually get worthwhile canticles buff, as you'll need 4+ units to get the better results.   So now he is actually getting more expensive.

This is doable, and Cawl is great if you want to basically deny slay the warlord, as he is very tough to kill, at least in CC.  He is a bit easier to kill with shooting though.  And Cult Mech units are not bad,  so you can build an army around him, but your going to have to make some hard decisions on army composition.  To me, if you want to run this, I see the Armored Company from Mont'ka being your imperial guard force, then spend the rest on Cult mech.  Cawl with breachers can hold your battle line and make deep strikers and units trying to assault your russes pay for it, and the other battle servitors are solid.  Throw a unit of the 1950s robots in for solid shooting and punching, and you have an army that is very tough to kill and shoots like a beast.  You will struggle with maelstrom though, so be aware of that.  You can take the previously mentioned cult mech detachment from Imperial Agents to get two more cheap

Really though, Cawl shines the best with a combined Cult Mech Skitarii army, especially with the Mechanicus detachment in the first Gathering storm book.  He significantly buffs the skitarii vehicles and relatively speaking, the vehicles are cheaper, and even though they are walkers, are still just as mobile, more so with dunestrider ones, than leman russes.  Cawl will really shine brightest in these combined Mechanicus armies.  Overall I like Cawl, but I don't think he is the best choice for guard, he can work, but to make the use of the Canticles that you want you will need to spend a decent amount of pts on non IG units.  Doable, but will really require care when building your list.

Celestine is another great character in the books. Personally, I think for general purposes, she is a better choice than Cawl.  Cawl will work better in a few select builds, Celestine will work in just about any IG army you build.  She is also another deny slay the warlord character, with her sisters and coming back to life.  Plus the continually regenerating wds with being able to bring her sisters back to life.  She is more mobile the cawl,  and since her warlord trait only affects sisters (technically priests as well) you don't need to have her as warlord if you don't want to.  Yes she does offer a good opportunity to deny slay the warlord, but she is still only T3, and even with eternal warrior she will still die pretty quickly to lots of High S AP2 shots, and Grav as well.  Not taking her as warlord lets you be more aggressive with her, not worrying about her dying.

Her saintly blessings are all solid, but unlike canticles, does not require more units to make it effective, so unlike Cawl she does not need other units to make her work better.  She brings solid CC ability and mobility and leadership and army buffs.  She brings counter assault to IG, and can very quickly chew through 3+ save units that get into your face.  And having a once per game S8 AP3 barrage large blast is not bad at all.  Compared to Cawl, she is much more flexible and mobile and can work just as well as your warlord or not.  And compared to Guilliman, she is cheaper while still providing some of the buffs.  Basically she is the budget "primarch".

Greyfax is the interesting one.  I actually like what she can do quite a bit.  She brings another anti-psyker option to the table.  She has three powers, two from telepathy, one of the best psychic tables, and has decent wargear and weapons.  Her warlord trait is good, very solid, but you really don't want her as warlord, she only has a 3+ and no invul.  But this is where Imperial Agents come in.  Take her in the Inq Detachment as a lone inquisitor and you still get to make use of her warlord trait, but not having her as your warlord.

She brings you anti-psychic utility, as well as pushing back infiltrators.  With her psyhic abilities she works best in a large blob with heavy weapons, having a good chance of getting either shrouded or invis, and her special power will make units trying to assault your line have a tough time doing it.  Plus having a psyocculum give her unit BS ten against units that are psykers.  She is does compete with a culexes and while not as great at denying powers, she is more survivable by being able to join units.

Moving to the third book, and continuing in the same vein, we have grand master Voldus.  He is basically a Grey knight Grand Master and Librarian rolled into one.  He is almost 100pts more than Greyfax at 240pts.  He is a psychic beat stick, and gives you the option of strong psychic powers and a very solid close combat character with a Daemon hammer that swings at I5, which is very good.  If he is warlord he gets a free power from Sanctic, which isn't bad.  But to be honest he really isn't tough enough to get to the level of being tough to kill enough to deny warlord, as he does not have eternal warrior and termies are just not that hard to kill.  Really he works well in a squad that is going to get close to the enemy so that he can buff them and then ensure that they can take the objective, with he beating to death most things that the squads shooting doesn't solve.  He is ML3, so if you roll on the same table, you'll get the 4th power from psychic mastery so I would probably not bother with Warlord for him.

Cypher is interseting, he is 190 and has decent abilities plus shrouded.  His problem is a 3+ save and no invul.  And since infiltrate and fleet don't transfer to squads he joins, his utility is limited.  To be honest, celestine has hit and run as well, is faster, can join units, buff units, and is tougher to kill.  Plus cypher negatively affects your warlord.  There is simply better options from these characters choices.  If you want to bring an infiltrating squad of fallen space marines with cypher, that is probably the best way to take him.

The last is the big-G.  He is 350 pts and a lord of war.  He is just great for a gunline IG army, as he has all the command traits from the BRB if he is your warlord, which he will be, because why wouldn't you.  He is very hard to kill with a 2+ 3++ and FnP and the chance to come back to life.  His 3 shot S6 AP2 weapon is solid and his CC prowess is amazing.  Then their is the leadership buffs he provides, not only all the command traits, but lord commander makes all your units on the table, no range limit, reroll failed morale fear and pinning checks while on the table.

He will make drop pod armies seriously sweat, as they will have to deal with him, and with an IG army, you really don't care that he is only going to be walking.  He is just going to be walking around your line putting out fires and giving buffs.  Fast armies trying to assault you are again going to have to face him when they get close.

He is not invulnerable, but damn is he hard to kill and presents a very tough choice for your opponent, and will shore up the main weakness of gunline armies, being drop pod or rapid bike armies getting in your face before you can shoot them to death.  You have someone that is going to draw a lot of fire away from your guardsmen or vehicles, and will kill just about anything that gets into combat with him.

He has a steep cost, but can be very much worth it for a gunline army that doesn't care too much about rapid movement.  He buffs IG leadership issues and their weakness in CC.  While not being an auto take choice, he is something to consider and will work great in the right IG army.

So there you have it.  Most of these characters are very strong choices.  To me Celestine is probably the winner, being the most pts efficient for what she does.  She isn't the toughest nor have the best buffs, but she is hard to kill, fast, great in CC, and hands out good buffs for a very good price.  She is one of the easiest to fit into your armies.  There are other great choices here as well though.

Posted by Grumpy Guardsman at 11:36 AM