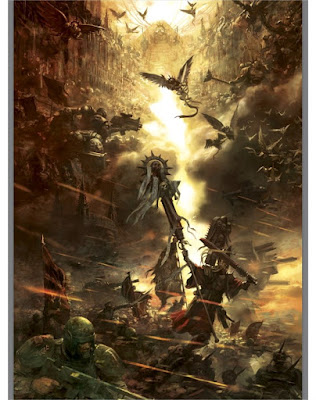 The somewhat recently released Imperial Agents book has some little gems inside it for the Imperial Guard to consider.  For the most part, there is nothing too special with the Sisters or GKs, and the deathwatch is ok, but I'd rather go the allied detachment route for DW than the detachment in the book here.  That being said there are a few choices that are strong consideration.

The first little one to consider is the Cult Mechanicus faction.  The detachment is 1 HQ and 1 elite, they have the Cult Mech Faction, and the HQ must be a Techpriest Enginseer, and the Elite must be a servitor.  Units from this detachment have Canticles of the Omnissiah.  Now you only get two units so not a high result, but, this opens up some options later on.  The Enginseer is the same stat wise as the one in the AM codex, and has the same rules, so thankfully even though he is Cult Mech, he can still repair friendly vehicles and give PoMS to AM vehicles.  He has a few extra options, the most notable is that he can now take a refractor field for 10pts, giving him an invul save, which is pretty solid as these guys can die quickly to AP3 weapons, so a small boost to survivability is welcome.  The servitors are the same, with the same options.

Where this starts to get interesting is when you start thinking about taking Cawl for canticles of the Archmagos for protecting your tanks.  His main drawback is that you are going to need to take relatively expensive units from Cult Mech to get enough to make the canticles worth while.  With this detachment, you are getting two cheap units with Canticles, then Cawl for 3, if you take him in an allied detachment and take two battle servitor squads, you now have 5.  For a tank army, that is already going to be considering a techpriest and servitors, that gives you something to think about.  The electropriest are cheaper, but they are really squishy and don't do enough in my opinion, rather get the battle servitors that will be more useful.  This way you can get use out of Cawl's canticles, for the cheapest way.

The next interesting section is the Aeronautica Imperialis, which is a detachment with one fast attack mandatory and an optional HQ.  The mandatory fast a attack is a Valkyrie, which is exactly the same as the AM book, with the FAQ these Valkyries can transport units from AM, MT, and INQ as if they were the same faction, so you can have a sweet flying ride for your INQ henchmen or if you have a combined army of Tempestus and AM, the valk can take any of those squads during deployment. This detachment can re-rolls failed reserve rolls as well.  The optional HQ is an officer of the fleet, who is an IC and has the usual options that he can take from AM, but can also take a refractor field.  This is actually quite solid for Tempestus armies, giving you a super cheap reserve modifier, and if you are already taking a valkyrie, well, no issues.  He is 20pts, 30 with a refractor, so you have the cheapest way to get a reserve modifier with your Tempestus army.  As for a standard guard army, well if you are going with some INQ, then maybe as he is able to join units, but really you can just take him in a command squad.  So if you are not taking a CCS, then maybe consider this.

Now for something I really like, the Adeptus Astra-telepathica.  This detachment is compulsory 1 HQ and 1-3 Elites optional.  They have the Astra-telepathica faction, but otherwise are the same psykers from the AM book.  You have the Primaris psyker, who is exactly the same, nothing to really note here, but the Astropath?  Oh boy this guy is a nice little upgrade from the standard astropath in AM.  His base cost is the same at 25.  Now though things get interesting, he can chose from Telepathy AND Divination, and he can be upgraded to ML2 for 25pts (50pts total), and he is an IC, and he can take a refractor field.  Oh and he also has astropathic orders, which means if he successfully manifests a power, you can reroll your reserve rolls next turn.   Yeah, I like this.  He is basically the cheapest ML2 psyker that can access telepathy.  And he doesn't have to be in CCS.  So you can throw him with a vet squad in a chimera and go to town.  The detachment also has Empyric Link, which means if the Primaris or Astropath is within 12" of 5 or more wyrdvane psykers, their powers manifest on a 3+, the wyrdvanes must be from this detachment, which are the optional elites choice.  There is no change to the wyrdvanes.  But for a super cheap ML Divination or Telepathy psyker, oh boy I like this, lots of utility out of this guy.

The inquisition has one little thing from this book that I want to touch on.  And that is that the little detachment, which requires only a single inquisitor, can still have a warlord trait even if not your warlord.  Oh hello greyfax.  So you can still have your normal Warlord rolls, and if you are talking creed, you are getting three warlord traits.  This makes a cheap ass inquisitor a solid thing to consider for an extra warlord trait.  The only inquisitor that doesn't really get mileage out of this is Coteaz, as then you are losing the Obsec bonus he gives his detachment, and his warlord trait only really affects daemons.  But for greyfax and stock standard inquisitors, this is a solid option.

The rest of the options here are nothing really special in terms of IG or MT.  The other factions are just as useful as an allied detachment or separate CAD, and assassins are the same as in the Mont'ka supplement, so really this is only for if you don't have Mont'ka and want assassins.

There are quite a few little tricks this book has to offer for the guard and scions, with the Astropath being the standout winner in my opinion.

Cadia Stands!
GG
Posted by Grumpy Guardsman at 10:57 AM