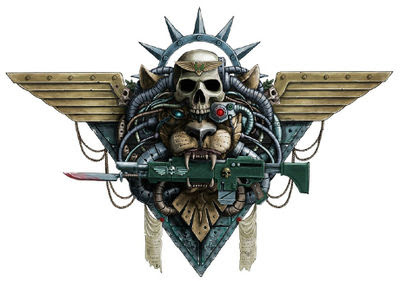 Orders.  The fundamental cornerstone of the Imperial Guard.  Without it, the guard is just a bunch of mortals armed with angry flashlights and protected my reinforced cardboard.  With it, an unbreakable wall of armor and flesh and unstoppable light.  Mastering orders will bring victory, and it is no easy task to do this, as your army and situations will change, and how you apply your orders will not be the same every time.


To begin with, we must understand how orders work.  The first is that in order to issue orders, the model must have the voice of command, which allows you to issue one order to a  unit within 12" of the officer, with that unit taking a leadership check to see if it passes.  Orders cannot be issued to units locked in combat, or gone to ground or falling back with the exception for orders that specify that you can (Get Back in the Fight).  Senior Officer allows the officer to issue two orders a turn and can issue senior officer only orders.  A few final things, Inspired Tactics and Incompetent Command, two sides of the same coin.  For the first, a double 1 causes all following orders to be automatically passed.  The second on a roll of double 6 the order fails and no more orders can be issued for the remainder of the turn.

Importantly, orders must be issued at the start of the shooting phase, so before you fire anything, you must issue all your orders and resolve them.  This presents the main complication with orders, you must be careful to not fire anything before your orders, thus losing a turn of orders, sure a nice opponent might forgive the careless mistake, but its not good to reinforce bad habits, nor bring about suspicion of cheating as that is never fun.

The last few games I played I ran into the issue of having to decide whether to forgo orders with my scions and use the Tauroxes to destroy DE raider first and then use my infantry to take out the infantry inside, or have my infantry use their orders to try and destroy the raider and then use the vehicles to take out the infantry.  In this case, as Tempestus is so limited on orders, I should have forgone orders to use the tauroxes to finish off the raider first.  Its important to note that though rare, their will be situations where you may need to forgo orders and be aware of this.  Sometimes it is better to keep your troops embarked rather than disembarking them just so you can get orders.

Now there is a way to help you out in this regard in the form of tank commanders.  Though they have different orders, their orders must also be resolved at the beginning of the shooting phase, the same time as your other orders.  Since whenever you have actions that must be resolved at the same time the controller player chooses the order, so you can use this your advantage by using the tank commander first to pop transports or other targets to give your infantry more options once his order is done.

As with tank commanders there are formations that helps solve the dilemma of resolving orders at the beginning of your turn when you may want your artillery or tanks to shoot first.  With the artillery company in mont'ka, the company commander in the formation can issue orders to its vehicles, thus allowing you fire your artillery before your infantry.

Thankfully we no longer have to resolve orders from highest ranking officer to the lowest, so you can save those orders for last if needed, giving you flexibility.  Your senior officer orders are where the most valuable orders lie and target priority is key, but just as important is using the right unit with the right order against the right target.

Orders need to used to remove key units from your opponents army, but you must use the right unit to complete the task.  For example, using the ignores cover order against eldar jetbikes but using a unit that has no AP3 weapons is a waste of the order.  With a large unit that consists mostly of lasguns, first rank fire will be more effective from simply getting more wounds allocated to that unit, where it will likely have a 3+ save whether it jinks or not.  You must always consider objectives as well, though you may want to simply lay waste with shooting, it is better to secure an objective.  Unless you have so much firepower that you can devastate your opponent early on, take the objective.  If you are only a short distance, you can still use the shoot then run order to not completely lose your shooting.

Because orders are issued at the start, when you are shooting with your vehicles, always consider what orders you need to issue NEXT turn.  Your vehicle part of your shooting phase is the first part of your next turns shooting phase!  This is especially important when dealing with transports, as you will want to have the occupants exposed to your fire.  It will be unlikely that all your infantry shooting will take out every target that you needed to that turn.  Use your vehicles to set your infantry up for next turns shooting phase.

Target priority in the early game, especially first turn, needs to be on your opponents force multipliers.  For example in the case of Tau it is their markerlight support.  For psychic opponents this will depend on the powers and whether you go first.  If they have invisibility, and you have first turn, focusing on those units first is key.  However if you do not go first and your opponent gets invisibility off, then you must ignore that unit and focus fire on other targets of high priority.  Unfortunately, in most cases there is little that orders can do against psychic death stars without a way to counter them.

Now I have not gone into each order in detail, and there is a reason for that, mostly because I have already gone over them and if your a guard player you have your own codex.  This is not about the details of each order, but how you must think when applying them in the totality of the game.  Your orders must build off each other to win the game.  And always remember to win the game you must score objectives.  Killing enemy units is a means to that end, not an end in and of itself.

One the biggest mistakes is getting greedy, and forgetting what you really need to accomplish. Orders are limited and must be used against high priority targets, don't get greedy and use them against a unit that can be dealt with later or with shooting that does not require orders.  Other cases can be when you use split fire to try and take multiple vehicles out.  Will that one shot guarantee a kill?  You might get lucky, but luck is a terrible strategy.  Better to ensure one unit dies, than hope you'll get a lucky shot.

In the end, using orders to maximum effect requires you to think beyond the turn you are in and to know how your opponents army works.  Easier said then done, and with all the different factions out there, you will learn the hard way sometimes and that is ok.  Losing is a great way to learn.  Know what your units can realistically accomplish, luck can occasionally save you, but it will just as often damn you.  Build your army so that orders can be used to maximum affect.  Sure ignores cover is nice on three missile launchers, but when you need six to get the job done, the orders will only take you so far.  Hope this helps and gets you thinking on how to get the most out of your orders.