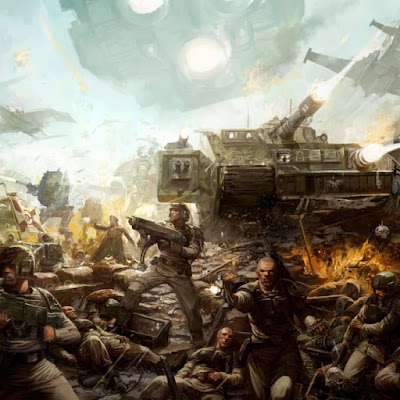 Its time to wrap up the remaining formations in the Cadian Battle Group, that can be taken on their own if you wish.  There is one remaining formation that is a real winner, another that is decent and the rest are meh.  Its unfortunate as this book was so close to really nailing it, but the Detachment is really unwieldy unless you are playing very large games, and more than a few formations that aren't really that great.
The last real winner is the psykana division.  Its a primaris psyker, 3 wyrdvane squads, and 1-3 commissars.  At base its 255pts, not bad, certainly something that can be easily fit into a list.  Its the benefits that make this a really solid formation.  The first is Empyric Link: The primaris psyker knows all powers that the wyrdvane psykers know that are within 12" of him, and gains a mastery level for every 5 wyrdvane psykers within 12" of him, note this is only for generating warp charges so he does not gain additional powers (other than what the wyrdvanes know).  The second is Encouraging presence: Any of the wyrdvane units that are joined by a commissar harness warp charges on a 2+.  If the psychic test fails, or a perils is rolled, one randomly determined wyrdvane psyker is killed (no rolls on peril table).

This is a nice cheap formation that gives you a great psychic battery for your army.  I would probably run 3 commissars to buff up the wyrdvanes and have each roll on divination, giving each prescience and another power, with the primaris upgrade to ML2 and rolling on another table.  Keep these units close to buff up your warp charges and use the wyrdvanes with commissars to cast prescience on your units with a very high reliability.

This is still a relatively fragile unit, but you can take transports, though it will rack up the pts very quickly doubling its cost.  I would keep it relatively cheap, but the commissars are pretty much a must.  If you are running AM psykers, I would definitely strongly consider this formation.

The next remaining formation is the Aerial Company, which is 3 squadrons of Valks or Vendettas.  They have formation flight, in which if one passes its reserve roll, any of the remaining flyers can choose to automatically pass their reserve roll.  This is great as its not an all or nothing roll, and you can choose to automatically pass, giving you the option to not automatically pass as there might be situations where you don't want them all to come in.  This is an extremely flexible rule.  If the first fails, but the second doesn't  then the third can still come in automatically.  The next rule is low altitude drop.  At the start of your movement phase declare if one of the flyers is doing a low altitude drop.  It cannot jink till its next movement phase and if it passes over terrain that is more than 3" tall it must take a dangerous terrain test.  Note this is only terrain, not enemy units!!!  Units that disembark via grav chute insertion do not scatter!

While this is not as critical for scions, as they have move through cover, so only issue is scattering into units or impassible terrain, which can be mitigated with placement.  But for vet squads or infantry squads, who will take dangerous terrain tests if they scatter, this is very good for them, especially for demo vets.  Drop in with a command squad, two demo vet squads, and then just order ignores cover on them and drop those demo charges on those bike units or other heavy infantry.  There are a lot of good uses for this, and if you are already taking three valks or vendettas, take this!

Now we are leaving the good.  The Super-Heavy formation isn't bad, its just too big to be useful.  This is an Apoc only formation, in the sense that the formation is just too large pts wise to be really used in normal games.  Its 3 baneblade variants and an enginseer.  The enginseer adds two to the roll for repairing, good which basically gives you the benefit of two servitors without having to take them.  The next causes an enemy unit to take a moral check on 4D6 if that unit is hit by 3 or more Primary weapons.  Thats nice, if unlikely.  The last causes all units to count as moving through difficult terrain if within 12" of at least two of the super-heavies.  Its not a bad formation, and most of these are useful.  Its just too big to be used normally.  Great fun for Apoc though.

The ogryn auxilia is bad.  Its a commissar, 2 units of bullgryns, and 2 units of ogryns.  Well that is a lot of pts.  And what do you get?  Fearless if within 12" of the commissar.  Oh and if a unit that has already been charged by one of these units and is charged by another, its hammer of wrath are resolved at S7.  Yay!  ugh.  Rampart detachment is just better, and cheaper.  If this was just two units rather than 4, This could work. as you could load up two Ogryn squads in a transport and give them the morale control to hold while they wait a turn to charge.  If you have a lot of Ogryns and Bullgryns, and don't care about a good army and just want to forge a narrative, go for it.  It'd be fun to see, but not exactly a great choice.

To summarize, the Cadian Battle Group and its formations have a few real winners that should strongly be considered.  The detachment does work for a leman russ army, and can be quite good if not the most competitive.  The Artillery Company is prob the best all round formation for you to take in your army.  The psykana division and the aerial company are quite good.  The sentinel company is ok and helps out armored sentinels, if not being amazing.  The infantry platoon and company are just way too big.  The Emperors Blade assualt company is quite good and pairs very well with the armored company in the Battle group detachment, but outside of the detachment isn't really needed.

The battle group was an attempt to give the imperial guard a decurion style detachment that mostly failed.  Hopefully their next try will be better.

Cadia Stands!
GG
Posted by Grumpy Guardsman at 10:51 AM