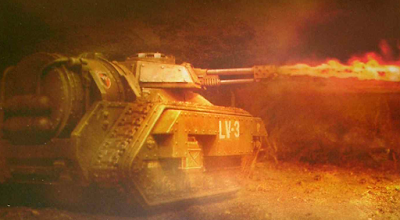 Yesterday was about the model, today is about it's tactics.  The hellhound and its variants are all quite solid in what they have as weapons and their abilities.  Their main drawback is that they are not cheap, with them being at base cost of some of the leman russ variants.  Now they can move 12" but I don't think that is enough of an ability to justify the same price as the cheaper leman russes.  That being said, they are not bad, just not necessarily optimal.

The hellhound consists of three variants, the first being the standard hellhound with the inferno cannon a torrent S6 AP4 template weapon.  All the variants come stock with hull heavy bolter which can be switched to heavy flamer for free and multi melta for 10pts.  This guy runs in at 125pts, 5pt more than an Eradicator, which has a S6 AP4 ignores cover large blast.  Yeah the Russ will scatter, but you see where some of the issues come in with the price of the hellhound.

The hound does have some tricks up its sleave though, with it being a fast vehicle, and it having 12 side armor.  Fast gives it the ability to move 12" and fire both its weapons, and flat out 12" giving you a 24" move turn one.  With the torrent weapon, it has a pretty solid threat range out of the gate.  One unfortunate thing though with all the hellhounds is that they do not come with smoke launchers stock, so you are going to have to pay for them.  Which you should, as they are going to need to get close, and unlikely to get in range turn 1, popping smoke gives them added survivability.

For all the variants, they work best in pairs.  This adds to the chances of getting in range and increases their damage potential when they do.  Use them as flankers and get into position and clear medium infantry from objectives.  Hellhounds work best when supporting infantry, especially mechanized, as they can position themselves on the sides of your chimeras to cover their side armor of 10, with the hellhounds having 12 side armor.  This also forces your opponent to choose between your ObSec infantry or the hellhounds.

The Devil Dog is my personal favorite just because I think its cool.  Its 135pts and has a melta cannon, which is a 24" small blast melta weapon.   Scatter can be an issue, but a pair of these with multi-melta hull weapons will reliably kill a vehicle in melta range.  Why take them over russes?  Well that depends on your play style.  Again these compliment fast moving mechanized infantry, who can bring anti-infantry weapons to support them.  The Devil dogs can root out vehicles and heavy infantry.  You are taking them for their mobility and speed over the russ and still retain anti-armor capabilities.  Use them as flankers, or if facing a deepstrike or drop pod army you can reserve them to come in after all the drop pods have landed, protecting them from alpha strike.

The Bane wolf has the best potential use in the current meta.  Its 130pts and has a poisoned 2+ template weapon at AP3.  It will murder eldar and marine bikes with ease.  It is not torrent which is its main disadvantage.  A pair is a must, as their deadliness against these unit is well known and they will be a high priority target.  You will need to play cagey with them, hide them or reserve them, and wait for the enemy to get close.  Then pop out to strike.  Infantry support is also highly recommended, as you will want to use the bane wolves to clear objectives for your own to take.  The choice on whether to reserve them or not is going to depend on the army you are facing.  If it is white scars bikers that are scouting, and have first turn, then its best to keep them on, and find a good spot to keep them out of range of the majority of turn 1 shooting.  Against Eldar, it depends on the armies anti-tank ranged shooting.  If they don't have a lot, then hiding them behind LoS blocking terrain is more than fine.  Otherwise consider reserves, especially if you have reserve manipulation.

The bane wolf, being the best choice, makes it in some ways the worst.  It will be the hardest to use as its deadliness is very well known and will have a lot of firepower pointed its way.  But if you can keep it alive long enough to clear a few bike squads, it will pay for itself.  The key is keeping it alive long enough to do this, and protecting it from assaults, as it will need to get right up close to use its weapons.

None of the hellhound variants are bad.  The suffer  from simply being a bit too expensive.  They are fast though and if you need mobile firepower, they are a strong choice to consider if you need something faster than ruses.  They work better in numbers, and with mechanized infantry.  Hopefully they will get a pts drop eventually.

Cadia Stands!
GG
Posted by Grumpy Guardsman at 10:12 AM