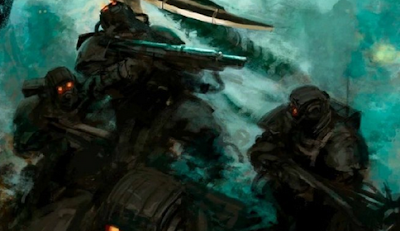 I love the Militarum Tempestus, but as a standalone army it is sub par.  The orders they get are good, but without senior officer, you are significantly limited in actually getting to use them.  They have no real AA for dealing with FMCs, and no way to deal with really strong units.  The army does excel at MSU and cutting through most armor saves, but with weakly armored vehicles can struggle to move about and stay alive.  Deep strike helps, but risks your army being tabled before coming in.  In short, they are fun and cool looking, but without allies struggle significantly.

With that, what can you bring to bring this army up?  Well the first choice is a Knight.  With multiple options and the ability to deal with deathstars and invisible units, the knight is a choice that immediately fills the gaps in this army.  It won't really be able to deal with flyers, but with the way things are, FMCs are more common in numbers than flyers, so you can generally ignore them and use the knight to kill the ground units and wait for the FMCs to land when they need to grab objectives.  There really isn't a lot of things to consider with the knight, but taking the Gatling cannon and a carapace missile will even things out and give you multiple targets that you can threaten.  This
is not everyone's favorite option, but is an easy way to shore up the scions weaknesses.

There is an army though that really compliments scions very well and together can assist in a lot of their respective weaknesses.  Skitarii can really give scions what they need, and scions can help skitarii out as well.  Skitarii bring ranged firepower to the table as well as affordable anti-air units and cover reduction abilities.  A few squads of rangers with arquebus in the back field for objectives and long range shooting, an Onager for AA, and another onager squadron with heavy phosphor blasters for helping reduce cover saves.  Then some vanguard squads, which can hitch rides in tauroxes, you'll have to load up turn 1, but it gives those squads some mobility they otherwise lack.  Then scion squads, and I would deep strike all of them.  You can play this a few different ways, whether you want to focus on the Scions for the majority of your pts, or the Skitarii.  The main way this army will work best is skitarii in the back with shooting, you could add another onager squadron for more firepower, with some tauroxes for transportation, and scions deepstriking or riding in valkyries.

Neither armies are particularly amazing on their own, though I think skitarii is still a bit better standalone Tempestus.  But they really help each other out.  Scions bring deepstrike and objective secured, allowing for a lot of flexibility in grabbing objectives.  Tauroxes, while not the cheapest transports, are fast and decently reliable moving through terrain (unless its me, Yay double 1s).  Skitarii have some great ranged shooting with ranges, onagers, and the ironstriders.  The standard skitarii detachment has scout, giving those units extra mobility to counter your opponents deployment.

Skitarii vanguard also bring pretty solid close range fighting abilities and are no slouches in close combat.  When this army works, you can deliver a solid knock out punch, with the backfield units weakening your opponents army for the first two turns and then the vanguard and deepstriking scions coming together at the same time to finish off your opponents major threats and grab objectives.  Valkyrie gives mobility and fire power, with the ability to also pick units up and move them across the battlefield as needed.

Skitarii is not the only choice and while guard seems like another obvious choice, in some resepects less so.  As your only gaining some minor improvements.  Guard can already take scions, yes they are not objective secured, but guard has vets and platoons for that.  The orders are still very good, with ignores cover and monster/tank hunter.  So taking guard and tempestus separately is not as great as it seems.  Though there is one specific way I can see this being strong.  That being taking the Emperors wrath artillery company and either a scion CAD or the ground assault formation.  These work very well together.  Otherwise guard can do a lot of things better, and they already have scions.

While Cawl is an option to consider, to be honest, he can buff other vehicles better, like leman russ or artillery.  So while he isn't a bad option, he works better with standard guard rather Tempestus.

I love the look of scions and the idea of this army.  On its own though it struggles.  Allies can significantly help them out, and they synergize extremely well with skitarii.