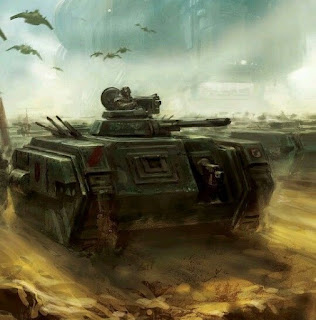 The Chimera, the work horse of the Imperial Guard.  While not being the cheapest transport in the game, it brings a lot of versatility to the table with a wide range of weapons and abilities.  I love chimeras, both model wise and what you can do with them on the table.  This won't be the most competitive tactics discussion ever, but these are fun little ways you can play with your chimera and possibly frustrate your opponent.
One of the great things about the chimera is that all its weapon upgrades are free so you can really play with options here.  One of my favorite little loadouts is to basically go for a cheap hellhound.  Take two heavy flamers, you don't have torrent, but for a vet squad with meltas that are going to need to get up close and personal, the chimera can move forward to clear infantry out of the way for your vets to have a clear shot on the vehicle you want dead.  It is not a fast vehicle though, so consider keeping the hull heavy bolter so you can fire snap shots.  This is effective as well with tank shock, using the chimera to tank shock 6" to push an enemy unit (possibly fail its Ld check) and then heavy flamer it.  Its better to put the heavy flamer on the turret, as you will be able to fire it in multiple directions and keep your front armor facing the direction you need it to.  This gets more effective with numbers, so if you are taking multiple vet squads in chimeras that need to get close to be effective, a turret mounted heavy flamer on them all with clear up a lot of infantry.

Another fun little tactic is using your chimeras as heavy weapon team shelters.  This is especially good for blob tactics.  Since your blob won't be needing transports, and heavy weapon teams cannot take them and GW has not yet bestowed IG with the privilege of transports as fast attack choices, you can purchase them for the blob squads and load heavy weapon squads into them turn 1.  The downside is they will have to embark turn 1 instead of during deployment.

This mitigates the weaknesses of heavy weapon squads, being that on their own out in the open, they are very easy to double tap and die quickly.  Putting them in chimeras gives them extra survivability.  Normally I would not mix weapons in heavy weapons squads but this case is the exception.  Since only two models can fire from the top hatch, and yes heavy weapon teams are one model, choose two primary weapons and then a secondary for opportunity targets.  There are a few loadouts that you can take, and obviously this will depend on pts and composition of your army.  The obvious choice is two autocannons and either a mortar or missile launcher as the third.  This gives you all round shooting, and the mortar is great against tightly packed infantry and barrage mitigates a decent amount of cover saves.  The missile gives some added versatility, but I would lean to the mortar for the last team, as a single missile is only so effective.

Another loadout that is more for fun than anything is two mortar teams, but the downside is that wyverns are the same price as chimeras and are simply better mortars.  But its fun to imagine mortars shooting out of the hatch.  This is really only for you if simply do not have wyverns.  If you need anti-tank, then go with two lascannons and either a mortar or autocannon, for the reasons specified above.  Mortars are so cheap, so this keeps the cost of the squad down, and only being able to shoot two weapons it should strongly be considered.  The last loadout I would consider is two missile launchers, which give you decent anti-tank and anti-infantry.  As with most things in the Guard, quantity will need to be taken for effectiveness.  Three squads in three chimeras provides a good balance of firepower and survivability without breaking the bank.

Some other shenanigans you can do, and this is sort of a combination of both above is to have a heavy flamer chimera taxing about special weapon squads for suicide missions.  They can take flamers for some extra anti-infantry fire, or demo charges if you are feeling dangerous.  You can take two flamers and a demo charge, or one flamer and two demos.  That way they can still have a weapon if they survive after they throw their charges.  The short range means you stand a chance of wrecking your chimera, but as long as the chimera is full on its hull points, it will probably survive.  If you want to decrease the danger to the chimera, you can dismount the infantry, and probably have a CCS follow in chimera in order range for ignores cover or of tank/monster hunter.  Even with that, your probably going to kill some of your own stuff.

But if your opponent ignores them, he will be in for a surprise when they hit (if they hit).  Its a bit of a gamble for the demo charges to work, but special weapons squads are cheap suicide units, so who cares if they die.  Getting to their target is their main problem.  This solves it.

Cadia Stands!
GG
Posted by Grumpy Guardsman at 9:46 AM