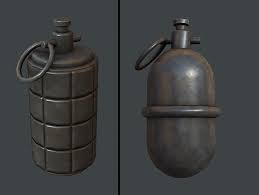 A little bit of a rant today, but also some tactics.  I missed upon my first reading the changes for grenades in close combat against vehicles and MCs.  If you are not aware, the main rule book FAQ has ruled that you can only ever use one grenade/melta bomb in close combat per unit.  This is a huge nerf for armies that do not rely on strength to destroy vehicles in close combat.  What is also frustrating is that this wasn't really a needed nerf, as the armies that relied on it are not the main close combat threats to vehicles.  It is what it is.


Krak grenades used to be auto-take for most of my squads, giving most infantry a reliable way to bring down vehicles in assault.  And it makes sense, ten guys swarming over a tank should be able to put more than one grenade on it, especially if khorne dogs have no restriction to their attacks.  Is using a grenade really that much harder?

This changes the equation on anti-vehicle weapons, as I would rarely bother with a melta bomb, its a single attack and you are relying on chance to get that explodes, whereas krak grenades would be much likelier to wreck the vehicle, though not explode it.  Now though, since you are only getting one attack, krak grenades are a worthless upgrade, and if optional you should never take it, especially over melta bombs.

Given the cost difference, and no disadvantage now to taking melta bombs, you should always take melta bombs over krak grenades.  But it also begs the question should you take anti tank cc grenades at all, especially when considering MCs and walkers.  Since you are now much less likely to do significant damage to said monsters or walkers, the "our weapons are useless" rule is useful to prevent the enemy from hiding units in CC away from your shooting.

Tactically this will depend on whether you wish to tarpit units or not.  If you have the firepower to deal with these units, then it is advantageous to make use of our weapons are useless, this way ensuring the enemy unit will not be able to hide in close combat during your shooting phase.  The disadvantage is that you will be rely nearly solely on shooting to deal with these units.  Personally I like having the option of dealing with vehicles and walkers in cc, in case my shooting fails to get that last hull point.

On the flip side though, armored sentinels are significantly more survivable in close combat, especially against basic infantry units with krak grenades or only one cc weapon that can hurt them.  Since sentinels will never run from combat, they are excellent at tarpiting tactical squads or devestator squads.  A heavy weapon unit that is a high threat to your vehicles with its shooting can be reliably neutralized for a few turns with armored sentinels, turning their forcing them to fight in close combat where they are less effective.  They are still not great against high strength close combat units, but against units with only krak grenades or a single weapon that can hurt them, they will easily hold that unit up for multiple turns.

At least there is some good news in all of this, armored sentinels are now much better in cc.  Something to consider at least as they will be much more likely to survive multiple rounds of combat, and are quite cheap to bring.

Cadia Stands!
GG
Posted by Grumpy Guardsman at 9:57 AM