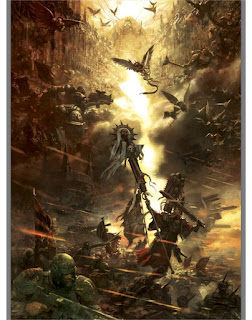 Well our first big news regarding the upcoming changes to 40k have dropped from Adepticon.  Not only rumors but also new Death Guard models have been revealed and Mortarion has pretty much been confirmed as the next Primarch (daemon obviously).  As far as 40k, it is looking that we are going to get some Age of Sigmar rules, but also a return of rules from Older Editions of 40k.


Two things that I find good are that GW is looking to implement a Generals Handbook to 40k that will have three ways to play, basically Unbound, Narrative, and Competitive play.  Basically not a major change as we essentially have Unbound and Narrative currently, though most likely will see changes to what a Battle Forged army will be in Narrative and Competitive.  On top of this will be rewards for building armies "true to Fluff".  They are looking at implementing a command pts system and giving buffs to armies that retain true to their lore.  So you build an all IG army, you get buffs.  You build a less fluffy power list, you don't get buffs (well you do in the synergies that army has).

I like that they are going to reward armies that keep true to the lore.  Really interested to see how these command pts are implemented.  Movement values are going to change, rather than unit type movement, it will be unit specific, this is similar to AoS but really this is a call back to 2nd Edition so not really an Sigmarization, just bringing back old rules.  This isn't really any simpler that how it is currently, as there are really only 3 movement types for basic infantry, with 6" being standard, then most other unit types move 12" or some variation.  To be honest, movement is easy to understand and this doesn't really simplify the game.  Sure you just need to know your units movement value, but its not like it was hard to figure out to begin with.

They are looking to return armor save modifiers, will be interesting to see how this is implemented, as I'm not sure how much of a fan I am of this, will see.  Basically shooting attacks will modify the armor save based on the weapon.  So not sure if this will mean the ap value will just modify the armor save rather than ignore it.  Marines might get tougher to kill, but no luck for guard.

For assaults, looking to return to charging models going first in combat, but unless they change how charging through cover works the issue will still remain with assault units that lack assault grenades will still be as bad as they are now.  In addition looking to adopt battle shock from AoS, so if you lose combat you roll D6 and add the number of models you lost combat by and subtract your leadership, you lose that many models.  Not sure how I feel about this, as I honestly like how combat is resolved, and with it looking like sweeping advances and other staples of the assault phase going away.  Again though this will depend how this is implemented and what the whole assault phase looks like in the new edition.

These are just initial hints at what is to come, so really it is hard to say how these initial hints are either good or bad as it matters how it fits into the whole.  As long as these differences are balanced for all armies and don't just screw a few armies, then that is fine.  To be honest though, not much here is really simplifying the game, more just changing the same complexity to different places.  Rather than movement being in the main book its on the units.  Its easier to know your army, but good fucking luck knowing everything's movement value.  Thats not "simpler".

Overall though, I am liking what I am seeing, and looking forward to see more. I really hope though that vehicles remain vehicles, with armor values and everything.  Small arms fire should not be able to hurt tanks.  Yes MCs can be hurt by a lot of fire, but its almost impossible to one shot an MC, and though I would like this to be the case, I feel this is an appropriate difference between the resiliency of metal monstrosities and flesh and bone monsters.  So I really hope vehicles do not get massively changed.  Will be interesting to hear more.

Posted by Grumpy Guardsman at 8:20 AM