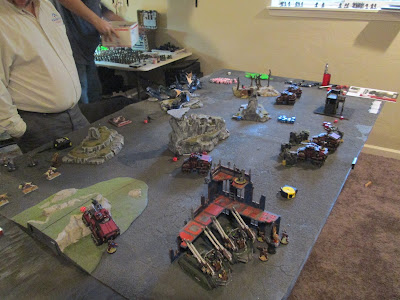 Rematch!  Going up against the Dark eldar again with my Tempestus.  Still using the Castellans of the Imperium detachment, only real changes to my list was the hydras, dropping the vendetta.  Played around with troops, dropping some guys from one squad to give me another 5 man squad.  We played Maelstrom mission 4, the one where you can steal objective cards from your opponent.  I got first turn, stealth ruins for warlord, and shriek + Shrouded + Hallucinate for coteaz.  He got the infiltrate warlord trait, but forgot to use it, and failed to seize.  Learning from my last game, I spread out more prevent being locked into a corner.  He had most of his force grouped up, using the big rock to block LoS from the Hydras.  Turn 1 I moved tauroxes up to the two objectives on my left.  The two on my right moved up as well.  Coteaz stayed in the ruins and popped off shrouding.  The assassin stayed on top of the ruins. 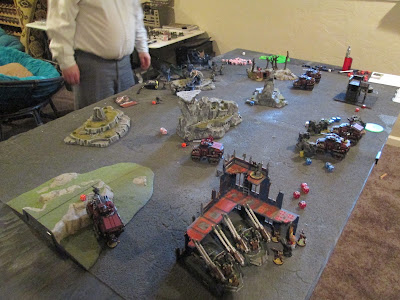 For shooting, the vindicare killed the beastmaster, dropping that squads leadership.  Then the hydras with nothing else to shoot, opened up on the beasts, and I got 5 hits!  Some early luck, and all 5 wounded, killing all of the dogs and one clawed fiend.  Few other units shot at them but it didn't matter.  My tauroxes in the middle shot at the middle raider with the grotesques but he passed every single jink save.  This raider would turn out to be very resilient.  The tauroxes on the right were able to kill the raider carrying the archon court.  For my I scored three objectives, on being D3 which I got the full 3 pts for, giving me 5pts. 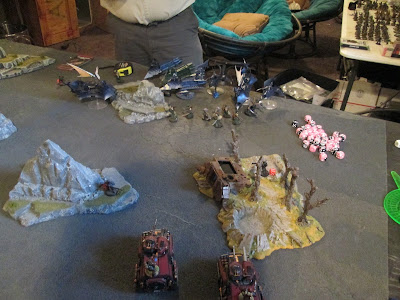 His beastpack failed it's morale running off the table, giving me first blood.  He moved the raider in the center up to my center objective and the other raider with grotesques towards my two tauroxes on the right.  The venoms and slyth moved to the objective on the right, he needed to hold it for two turns.  He did some shooting, but I think he only got a glance an knocked a hull point off.  He was not able to get one objective, I had units on it so was able to steal it.   He got 1 pt that turn. 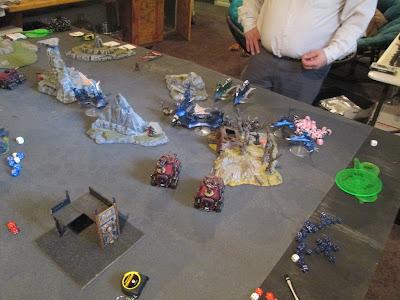 My turn two I fell back my tauroxes on the right, I should have moved them flat out, but lesson learned, I did not count on him making so damn many of his jink and FnP saves later.  The tauroxes on the left moved towards the center to support taking out the grotesques.  I got both my deepstriking melta squads in, dropping one by the raider and another on the center back objective in his deployment zone as i needed that objective.  Shooting after disembarking most of my squads, I attempted to focus fire on the one raider with the center grotesques.  This proved to be less fruitful as I used up a significant portion of my vehicle and infantry firepower.  I should have not ordered so I could have saved my squad shooting, but I need to issue three orders as an objective.  After a significant portion of shooting, I finally wrecked the raider, with the assassin dealing the deathblow.  I was also able to strip two hullpoints off the incubi raider and shake, which was great as it was not able to move.  My one deepstriking melta squad blew up a ravager.  Coteaz failed his psychic phase but moved towards the center.  I was able to score two more objectives, putting me at 8. 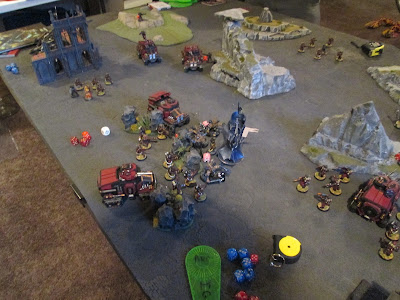 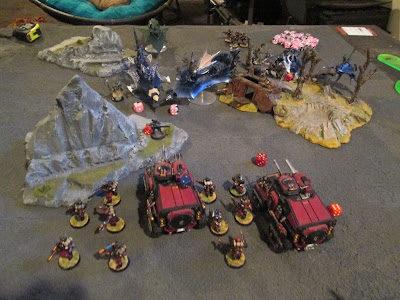 He disembarked his other grotesques, and moved his venoms about and his court to kill the one melta squad.  The incubi hopped out and made a for the other melta squad for a long charge.  The ravager moved for some shooting.  Shooting, his venom killed all but one in a scion plasma squad, and he was able to kill two in a command squad.  The ravager wiffed again.  Assaults, his grotesques in the center charged, I scored a few wounds on overwatch, and my prime accepted his heamonculi challenge, and was able to survive with one wound and score one on the heamonculi.  But the grotesques wiped the everyone out.  The other grotesques charged the tarouxes and were able to take a few hull pts but were not able to kill it.  The incubi attempted charging the meta squad and failed their range and lost one guy to a melta overwatch shot.  The one melta squad was killed by the court.  He got a great round scoring two objectives with D3 for a total of 5 pts, and stole one from me and got one more, putting him back in the game for 7 to my 8. 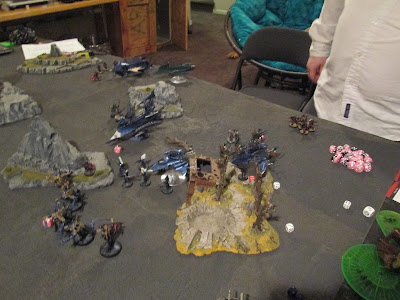 Turn 3 for me, I moved my surviving squads back and the tauroxes.  I should have just flat outed away at this pt, as the grotesques were  on foot.  Anyways I moved my left units towards the center to deal with his grotesques that had just murdered my squads.  My back field melta squad was able to blast a raider and I was able to bring down a venom.  The ravager jinked, surviving, but he was neutralized for a turn. Then I attempted to finish off the center grotesque squad, in which everything had taken at least one wound, and most were on their last.  Alas after significant fire power, they all remained standing, though all were down to their last wound.  Coteaz and friends failed their charge, I should have ordered fleet on them.  I will say, the grotesques being T6, as he got the +1 to T from his table at the beginning of the game made a huge difference.  I forget who the vindicare killed this turn, he finished the venom off I believe as he made most of his jink saves.  Which I will add, my opponent could roll 5s like no other, made so many feel no pain and cover saves during the game. 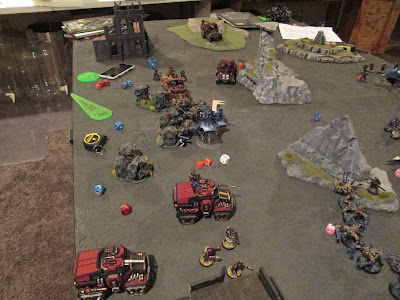 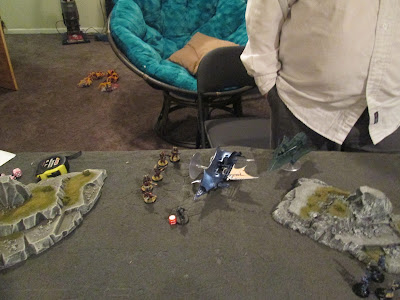 His turn he got his jet fighter on, which used the rocks to gain some cover from the hydras.  He then proceeded to kill most of coteaz's squad with it, leaving only the coteaz and a scion.  The incubi moved towards the melta squad, and he moved his other grotesques up.  Charging, his incubi lost another to overwatch but made it in, killing the scions.  But they came back!  The grotesques charged coteaz and I made a lot of armor saves on my scion, something like 8 or 9.  But one wound was left, and it was an instant death. What did I roll for my 2+ armor save, yup a 1.  Bye bye coteaz.  The grotesques on the other side finished off a few scions and a taurox.  He scored big this turn with 3 D3 objectives, putting him up to 12pts to my 8.  One other scion squad also made its return roll as well though, so I had two more squads coming back in. 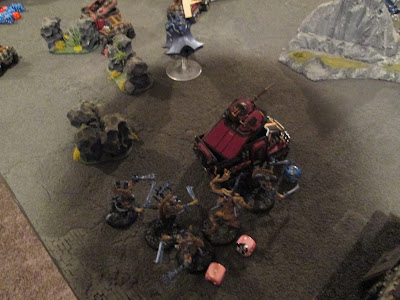 I deep striked the two squads back into his back field, as I needed the objective.  My one taurox on the left immobilized itself, as it would not be a game with Tempestus for me if I did not roll double 1s on my dangerous terrain.  I moved one taurox back too line up his lone heamonculi and my gatling taurox to line up shots on the grotesques.  Shooting the hydras were not able to bring down the razorwing.  The taurox was able to get the haemonculi on his last wound and the vindicare finished him off.  My returning scions got revenge and finished off the incubi and got a hull point on the ravager.  Then the rest of my shooting took out the grotesques in the middle.  Finally.    I was able to score 2 pts this round, putting me up to 10.


His turn he moved towards my deepstriked scions and moved his groteseques to try and chase down a taurox.  He was a able to kill a few scions, but most of his damage was from the razorwing, killing a squad that had finished off the grotesques.  He got his objectives though and scored another 3 pts putting him to 15.

My turn, I moved the taurox back and lined my self up best I could.  Luckily I drew objectives that I could get, with one to destroy a flyer and another to destroy a vehicle, so as long as I could bring down the razorwing, I would score two.  I already had the objective so that was also in the bag.  The Hydras had clear line and opened up, but even with all the pens and glances, it was barely enough to bring the flyer crashing down.  Unfortunately it didn't scatter onto any of his units.  Made more shots but the only real thing of note was the vindicare immobilizing the ravager.  But I got my three pts and it was 13 to 15. 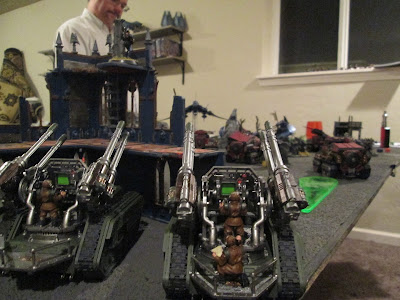 His turn 5 the court hopped into the last raider and it moved out to make for a far objective he needed.  The venom made for the center objective that the grotesques had died on, and the other grotesques moved again after the taurox.  They failed their charge again and other than that his turn was uneventful with mostly just consisting of moving.  He scored 1 pt, getting him to 16.  Time to see if the game continued, but alas it did not.  We tallied all the secondaries up and ended up with 17 to 16, with the dark eldar pulling out a narrow victory.  One more turn, but alas was not to be. 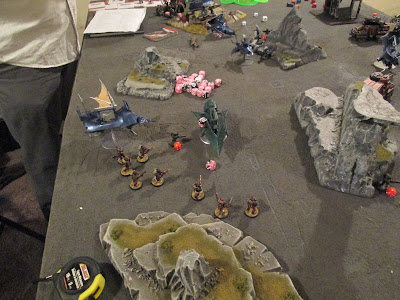 It was a very close game and, really what helped him a lot is using the supremacy deck, which had harder objectives to get but most were D3 or more, so he was able to score a lot of pts in just a couple rounds.  I made a few mistakes, but for the most part kept the game close.  The vindicare was great, being the finisher for many targets.  Coteaz, ugh, Obsec is great, but damn he is just not impressive, he dies so easily being only T3 and no eternal warrior.  I'll keep him for now though.  I am probably going to drop a bunch of plasma guns though, as they just explode in my face too often.  The hydras were great, they were consistent in putting a lot of damage out and even when snap firing were decently reliable.  Getting rid of the beastpack turn 1 was a huge boon to me as it secure my left flank and forced him into range of my hydras.

All in all, though I did not win, I consider it a successful revenge on the dark eldar.  And I just love maelstrom, so much more tactical than the old eternal war missions.  I will probably be giving the scions a rest for a little bit though, as I am itching to bring the guard out for some table time.

Posted by Grumpy Guardsman at 5:11 PM