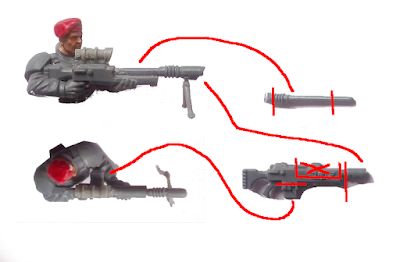 Today, going to do a guest post, as I got sent in some great conversions using the various small arms and Imperial Guard bits available.  A few a bit advanced but nothing too hard either.  This is from Mad Hawky, and I'll have his info he sent me in italics to distinguish my words from his.


First up is the above photo of what he is calling the FG12, inspired by the real world FG42

FG12 - You need a classic Kantrael lasgun and Vox caster antenna. Magazine is located at the left side of the gun. And if you find if familiar, it's inspired by german FG 42 rifle

This is another great option for a DMR or sniper rifle and would look really nice in a squad, or without the scope it would look great as a standard lasgun variant. 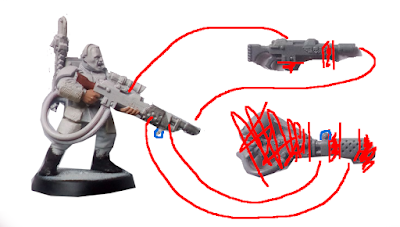 Next up a "heavy" lasgun.

Heavy Lasgun - Composed out of Kantrael lasgun and a Flamer. Conversion is quite difficult, but if you don't have hooves instead of hands, it will go. It's fitting for sniper or marksman rifle, but I personally use these guns on my Grenadiers.

I like this and the next ones as possible hot shot volley gun stand ins, but both are great for just adding personality to your elite squads.

SAW - Squad Automatic Weapon, or simply said, light machine gun. You need a Kantrael lasgun and a flamer, as shown. It's simple and good looking. Can be used as a Hot Shot volley gun, flamer, or just for aesthetics.

As above, really cool, and would look good with or without the flamer cable. 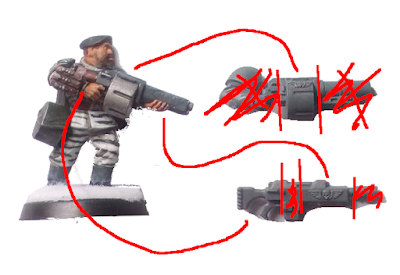 Tundra 29 - Another simply conversion, which should resemble an automatic shotgun (AA-12, Saiga 12). It's done in the same manner as the SAW, but without the flamer bit. Also left hand might require some modification, so don't forget to cover it with GS. I use them on Demolition SWS.


This is my personal favorite and actually looks to be a really simple conversion, and as I'm sure I'm not the only one looking for shotgun conversion options, this is really cool looking and would be great for shot gun vets.

Well there you have it, some great conversions from Mad Hawky, and thank you for sending them in and allowing me to share them.

Cadia Stands!
GG
Posted by Grumpy Guardsman at 11:14 AM