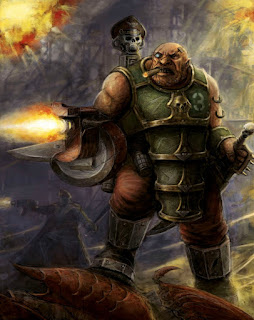 To continue with the Ogyrn theme, I'll be going over the Ogryn special character, Nork Deddog.  Like all the special characters in the codex he is highly priced, but for what he does I think he is not too highly priced, unlike some (looking at you Straken).  He can be taken in a CCS as an upgrade, and brings some interesting things to the table


So he is 85pts, which is 45pts over a standard Ogryn.  You get standard ogryn rules, with hammer of wrath, very bulky, and importantly stubborn.  Stubborn is quite good for a CCS, and helps insure they do not have negative modifiers for their leadership.  In addition he has Feel no Pain, and Look out Arghh, meaning look out sirs will always pass and Nork will take them.  Heroic sacrifice means that if Nork is removed as a casualty he makes his full complement attacks against the unit that killed him, even if he has already attacked, re-rolling both to hits and to wounds.  He has Thunderous headbutt which exchanges his attacks for a single attack a +3 S (S8) Ap3 concussive, he can also use this attack in heroic sacrifice.  Loyal to the end means he must declare a glorious intervention and automatically passes, and a commissar or lord commissar will never shoot him as a result of summary execution.  His stats are a slighty buffed bone'ead with WS4, 4 attacks and leadership 8 and I 3, otherwise has normal ogryn stats.  He has carapace armor, a ripper gun and frag grenades.

That is a lot, and what you have is a very survivable body guard.  I would not consider this as building a close combat squad, but something to give your CCS added protection especially if they are dismounted.  Carapace armor gives him a decent armor save and means most small arms won't get past his armor, with Feel no Pain to give added survivability.  He's not invulnerable, but adds significant protection.  Against shooting attacks though, it is limited as they will still wound on majority toughness, so the squad won't be significantly harder to wound.  He is not going to be able to tank, as if out front you will have a lot of wounds put on him, and a 4+ only goes so far.

His main benefits are if you get assaulted, as then his toughness can help, and he has a decent number of attacks with his special attack not being bad as well.  Being able to take wounds off your commander and taking their place in a challenge is quite good as he can fight pretty well against many characters, though will not stand up to close combat powerhouses.

Because his toughness will not be of significant use against shooting attacks, I find he works best in a CCS that does not contain your warlord.  In a transport this gives a mobile ccs that can be kitted out with melta guns to go tank hunting, and with nork can push squishy units off of objectives.  The commander can take a power weapon to assist, though not necessary.  This isn't an assault squad per say, more of a shooting support squad that then has the assault to finish off the target if needed.  This will also work well for monster hunting, as again the melta guns can do the majority of the damage and then nork can finish the monster off in CC.  This won't work against close combat focused monsters, but against shooting ones it is effective.

Nork has a lot of potential, but because of the way shooting works, his Toughness doesn't get to come into play until the squad is essentially down to the commander and him.  At that point you'll become much more survivable but nork will have to survive to this point.  If guard had an assault vehicle, he could be a much better unit choice for a CCS.  As it stands, the squad will have to be in the open for a turn before charging, but ideally this squad should be following other infantry or vet squads in transports around to lend orders and an assault if necessary.

As it stands, nork is bit expensive, though not to the point of being untakable.  Positioned right in the squad, he can survive long enough for his toughness to come into play which will then make the commander much harder to kill.  Really he should be positioned next to your commander with the rest of the CCS in front of them.  It seems counter intuitive, but since he won't really be protecting them from shooting attacks till most of the squad dies, means if you place him up front he will be wounded much easier and carapace and feel no pain will only stop so many wounds.  Nork offers the most protection from close combat, and since your opponent will know the close combat is where guard is generally weakest, a charge is very likely.  Nork will help your squad survive but is best to assist with a melta command squad that is following other squads, using his close combat attacks to finish off vehicles and mcs and weaker squads on objectives.

Cadia Stands!
GG
Posted by Grumpy Guardsman at 10:28 AM