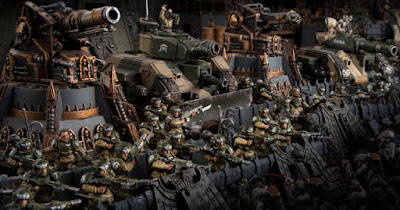 Its been a long while since I talked about starting an Imperial Guard army, and with new start collecting boxes and changes that have happened, I feel its time to look at this again, with a focus on these sets, especially as they offer actual discounts.

Really the best one is the recently added Cadian Defense Force.  You get everything you need for a starter army.  Its $165 with the value being over $200 if you bought all separately.  Its a limited run (so far) so won't be available for long, so if you are looking at starting an IG army, buy this ASAP. 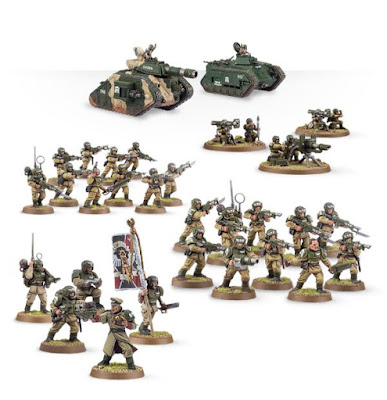 It has a command squad, two infantry squads, a heavy weapons squad, Leman Russ, and Chimera.  Everything a growing guardsman needs to become big and strong.  The command squad gives you access to plasma and melta guns, you have access to the main leman russ variants (MBT, Vanq, Exterminator, Eradicator).  The best part is that the other collecting boxes supplement this perfectly.

This also allows you to play a battle forged CAD right out of the gate, as you have a company command squad, and the two infantry squads can be taken as veteran squads, there is your HQ and two Troops.  How should you assemble the models?  Part of this is taking advantage of each of these kits and part is thinking on how you want to build your army long term.  The main question you need to answer is: Do you want to play Blob Guard (lots of dismounted infantry) or Mech Guard (Infantry in transports with lots of vehicle support)?  Both are good army styles and can give you success.

The infantry squads are easy, as you are going to build a vox, and a sergeant, the normal infantry.  The only decision is going to be grenade launcher or flamer.  I have a personal bias towards grenade launchers, I have killed so many things with them and so many players underestimate what 5 well placed krak grenades can do to light vehicles and medium infantry.  Flamers do work too.  I would say, for blob guard, the flamer has a slight edge in that you are going to be facing units assaulting them, so with a large combined squad with a lot of flamers gives you some decent overwatch.  In the mech arena, grenade launchers have a slight edge.  But both are good!  A blob with a bunch of GL can do a lot of damage, and a mech unit with a flamer can clear light infantry off of an objective with ease.  If you can't decide, build one of each.

The heavy weapon squad is easy for the first time guard player.  Autocannons, Autocannons all day.  As you increase your collection you can get other heavy weapons like lascannons or missile launchers, but you are going to want as many autocannons as you cant get.

The command squad is a great kit, with the only plastic kit that gives you the other special weapons.  For your first command squad, you are going to want to build your Officer, probably keeping him basic.  You can play with wargear options later.  You want a regimental standard, so build the flag guy.  Next you are going to want to build the special weapons.  Don't worry about the medic or the vox caster too much.  Though there are a few ways you can cheat to basically gets some extra models out of this.  The heavy weapons teams are going to need homes in your infantry squads, meaning in this set, 4 of the infantry models in the squad sets are going to be missing homes, so you can but the command squad vox on one to give you a third vox while still letting you build the most out of the command set.  You can also use one of the standard infantry models with a little customization for the special weapons in the command set, giving you the opportunity for building the medic.  The three weapons you want are the plasma gun, melta gun, and heavy flamer out of command set.  The set only builds 5 models, so with the officer, three special weapons, and standard bearer, you are there, but with the "extra" guardsmen from the infantry squad sets, you can stretch this kit out to get the most out of it.

The chimera is pretty straight forward, though when building it the hull mounted weapon does not have to be glued, it fits into the slot pretty well, and with a careful application of paint on the sides that connect with the hull, you can get a snugger fit.  For the turret weapon, you can glue your main weapon on, but with some magnets you can make its main weapon easily swapable and the slots that the kit has fits magnets perfectly.  Magnetization seems like it is hard, but its super easy.

The Leman russ is also easy, especially since all the sponson weapons slide in and out without any need for glue or magnets, so you don't need to make a decision on what sponson weapons you want on your tank, just slide the ones you want on for each battle.  The main gun is going to be your decision, and unfortunately on this kit, its a bit harder to make this swapable.  The demolisher kit though is very easy swap out the main weapons though.  You can go with a standard russ, as this will give you two options as the barrel for the leman russ and vanquisher can both be swapped.  Basically the piece that connects to the turret cannot be swapped, but it ends half way up the barrel with either the standar russ barrel or vanquisher barrel ends both fitting into it.  The exerminator autocannon is a great all round choice, and the eradicator is super cheap.  Take a look at tactics for them and make a call, you can get more tanks later.

So thats the defense force kit, next you have two more that offer price discounts and supplement this box set nicely.  The first being the start collecting box. 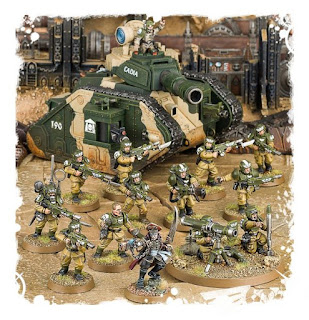 This gives you a commissar, leman russ, infantry squad, and heavy weapons teams.  How to build?  Well based off of the decision you already made above on where you are going with your infantry, just do some copy paste.  Build another autocannon, the infantry squad the same as you have been, and the leman russ the same as you did the first one.  Really, your only going to be deciding whether you want to kit the commissar out in any special way.  That really only depends if you plan on taking him as a lord commissar or not.  A bolt pistol and sword is something you can't go wrong with though.  This set is $85 and well over $100 of models.  If you are going blob guard, I would buy a few of these sets.

The next is the armored fist set.  Its $55 and gives you a squad and chimera. 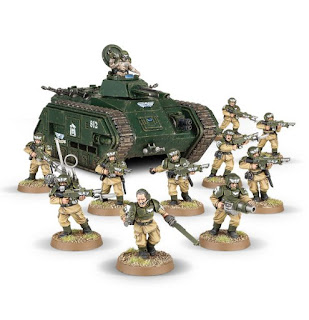 This has the least amount of money saved, but its still cheaper than buying the two boxes on their own.  This is going to be your main kit you are going to be buying if you want to go the mech guard route.  Stock up on more infantry and chimeras.

After this, the kit you are going to want to buy a lot of is the command squad kit.  Its $25, but has so many options and as I said earlier, its the only way to get plastic special weapons outside of grenade launchers and flamers.  Buying 4 of these for maxing out special weapons and having multiple different officer choices is what you want.

Guard is not a cheap army to play, so if you want to join the guard, be prepared.  These kits though will get you started and playing with an army that is not bad.  As you play more you can figure out your style and go from there.  Hope this helps and gives you ideas.

Posted by Grumpy Guardsman at 9:24 AM