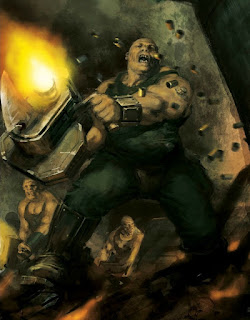 Ogryns and Bullgryns, the overcosted elites of the IG.  Ogryns especially, they are expensive, have crappy armor, and no real way to get into close combat.  Bullgryns, while not being the most points efficient unit, have some actual uses, they are better in CC than Ogryns, and are more survivable and can actually help your army out.   I still think both need a pts reduction, but one is at least usable.


Lets get the bad out of the way.  Ogryns have WS4 as they are a "melee" unit, sure I believe you GW.  S and T 5 with 3 W.  I 2 is not a huge issue, as guardsmen usually swing second anyway, and their T does help, they have 3 attacks, with the bone'ead having 4.  Leadership 6 (7 for the 'ead) is an issue, but they are stubborn at least.  They have hammer of wrath, which is something.  Its not bad, but not enough in my opinion to make up for their 5+ armor.

The main issue with Ogryns is two fold, besides their pts.  They are very bulky, so at most you can get 4 in a chimera, and having no assault vehicles, they will be out in the open for a turn.  With only a 5+ save and lack of numbers and leadership to take losses, they are unlikely to be able to make a charge the following turn.

So can they be used?  There is probably one way and that is keeping the squad minimal.  3 Ogryns in a transport, and since your going to want a character to fix their leadership issues, and doing so will make a chimera irrelevant, go with a standard taurox.  Its cheaper, and it will have room for a single character.  The Character you want is a Priest.  Having Zealot and War hymns makes the most out of what ogryns want to do.  Zealot ensures that if they lose an ogryn on their turn out of the transport, they will not run away.  Zealot and war hymns give ogryns a close combat boost, re-rolling to hits first round and then I would use the re-roll to wound war hymn.  This gives you the best boost to their first round of combat.

Now ogryns won't be competing for close combat unit of the year, so don't bother using them to kill super strong CC units.  They don't have the numbers to tarpit a deathstar either, which will usually have a lot of S8 attacks, so their T is not going to help them out either.  They are good though against middling CC units that don't have high S attacks, and great against most troop units.  They are useful for assaulting troops on objectives, clearing them out for your troops to secure.

Their main problem is that Bullgryns are simply better, and have no loss of CC potential when compared to Ogryns.  They are 5pts more per model, and have carapace armor, have the same number of attacks.  They main thing that makes them useful though is their slab shield.  The slab shield does a couple of good things.  First it increases the Bullgryns armor save to 3+ when they are in base to base, the second is adding a +1 to the units cover save when they are in the way of shooting.  So if in the open, thats a 4+ cover save, if the infantry is behind an aegis, thats a 3+ cover.  This also is great for leman russes as well, as because they as so tall, they easily give the 25% coverage necessary for Obscuration for vehicles.

Bullgryns have some actual utility, as they loose non of the CC potential and can still be used in counter charges and protecting your tanks and infantry, they boost your cover save and are quite survivable themselves.  Leadership is an issue, but priests are cheap.

If you are willing to spend some more pts, the Rampart Detachment in the Sanctus Reach campaign book, is quite good as well.  Its spendy as you must have two 5 man squads and a PCS, but the benefits are quite good.  The whole formation has Fearless, Counter attack, and fear.  Added to that, you get a +1 to your cover save if partially obscured by models from this formation.  So with slabshield Bullgryns, thats a +2 to your cover save, a 3+ cover in the open.  The formation covers the main weakness bullgryns have, leadership.  Well their fearless, and its straight up fearless, no unit required to stay alive.  The PCS is a fair tax for fearless bullgryns giving a +2 to your cover saves.

I have used this formation and it is solid, you have ten bullgryns, spread each squad out in a line in base to base and even in BtB they still cover a lot of ground to give you a cover save.  Whether advancing with leman russes or infantry they are a force multiplier.

Really there is no situation that ogryns do better.  Bullgryns are more survivable and buff your units.  Though expensive, bullgryns have enough utility to be taken, and if you are taking leman russes or lots of infantry, you should definitely consider taking a least a squad of them.  They don't care about transports as they are survivable in the open.  While not being the best units in the book, they are useful and can do enough to be worth taking.

Cadia Stands!
GG
Posted by Grumpy Guardsman at 9:25 AM