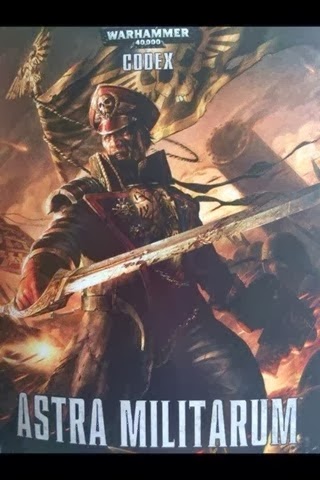 Well this weekend has seen a lot come out and it is looking interesting.  First as you can see, my fears were confirmed and we have a new name :(.  Oh well.  No I don't love it, but unfortunately its not my army to name, as much as I wish it was.  Now there were also other leaked images and if you haven't seen them, I'm sure you know the good rumor sites to find them.  It shows the new vehicle kit, a command squad kit as well as a hardback codex for Militarum Tempestus.  It 72 pages so this is a supplement for the main IG dex, looking to be a storm trooper focused one.

As much as the new names disappoint, the models do not.  Jury is out on the transport, but hey no one liked the centurions when they came out and I now find them to look good.  So I'll wait till I see an actual model, and at worst I'll be cutting the tracks off and replacing with wheels.  The storm troopers look awesome, I can't wait to see more detail on this kit.  This also excites me in that storm troopers may be getting some nice lovin, which will make me happy to no end.

I really am hoping that the rules are solid for them. I have always wanted to do an inquisitorial task force, but the current STs are over costed and henchmen have a crappy stat-line to what STs are supposed to be.  This could mean that STs are going to be good and may receive more than just a points modification.  I am really excited about the tempestus codex, as it could really have some awesome rules and bonuses to storm trooper formations.

I'm not really worried about a massive change to IG, mainly because they would have to do a huge model overhaul in order to do so.  The core of the army is going to remain very similar to what we have now.  But I really expect the other odds and ends of IG to be fleshed out far more with more options and rules to accompany them.

The kits look to be reasonably priced, the command is 35, 10 more than the current one, BUT, what it has looks amazing so I will gladly pay 10 more for what looks to be in it.  I know many will disagree, but thats too bad, I'm ok paying for better models.  The transport is in a similar price range tot he leman russ, which may be ok depending on how the rules come out for it.  If it is an assault vehicle, OMG, that will be nice.  That alone will make me consider taking one or two, especially if Ogryns have reasonable points costs as well.  It looks to have a twin linked punisher, and that really is not bad.

I probably won't jump to buy one but I am open to seeing what comes from it.  Overall I am happy with what is coming and can't wait for more.  It looks like a very solid release with support with supplements.  I know many don't like supplements, I love them.  They have great fluff and most have solid if not amazing rules.  Having an IG supplement that lets storm troopers be troops is a very nice possibility.  I love them btw.  I want a storm trooper company :).

In other news, the chaos supplement looks nice too.  Oh I know its not a legion dex, but oh fucking well.  Maybe GW is publishing rules that allow you to run legion style armies but not giving it a name since hey, the traitors have broken down into warbands, not so much legions any more.  This one just screams Word Bearers to me, with possessed as troops, Gal Vorbak hells yeah!  With a new possessed table that looks to be pretty good as well, I can see this going pretty well and I really will be interested to see more of it when it drops.

This weekend was hobby focused.  My buddy came over and we worked on our knights as well as did a trial run for the podcast.  More to follow on the podcast, prob have to rerecord a few things, we'll get there.  But we really dig our knights.  Its a beautiful kit and awesome to assemble. I'll do a full review of the model and codex, but suffice it to say I am happy.  I know there seem to be a legion that love the dreamforge leviathan, I am not one.  I really don't like it at all and the knight looks so much better.  The arms are great as you can assemble it and still have almost full movement, you really don't have to worry about posing it as you can move the arms even when its completely assembled.

The helm is coming together and I'll do a hobby post once I get more painting done and get the finishing touches to it.  I decided to go less wolfy, after looking at it I really like most of the model so it will be just the helm and the shield that will be different.  I like the rules and the codex is actually good and you can take a knight army and be more than viable.  Flyers will be an issue but oh well, deal.

Magnetizing the weapons is super easy and you can swap back and forth between different types no problem.  I can't wait to see if the other knights come out.  The codex has heavy support, fast attack, elites slots, so theoretically they will get something for them at some point.  And about people griping that you;'ll have to pay again to get the rules.  Not really as they will be in a white dwarf and I'm sure you can come up with $4 to get them.  Or take a pic with your phone of a friends if you are that cheap.

All I can say is I am really happy right now and I can't wait to see what theses codex's will bring and how the IG has changed.  Some of the fluff may be dumb, but that happens with every new codex and edition.  Don't get too caught up by it.  Things are looking good.