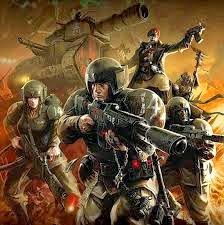 More rumors and some confirmed on 7th edition have come out and it is looking to be quite interesting.  Of course the world is ending now lol.  The force org changes have been confirmed in the WD releases as well as changes to the psychic powers (though we are short on specifics).  I really find it funny how much people are complaining about them as most really don't even seem to be that bad.

So the force org.  Basically you can choose between the standard force org and if you do there are some bonuses, though I have yet to see what they are.  Or you can go unbound and bring your hearts desire.  Not confirmed whether you'll still have to bring 1 HQ and 2 Troops as prequisites but lets assume not as the "worst case".  This really is not that bad.  Lets be honest the force org chart hasn't mattered a whole lot for a while with allies, double force org, data slates, formations, supplements etc.  Does removing the force org really change much?  Nope.  Sure WAAC players will abuse it, but I hate to break it to you they have never really found that to be hard in any of the editions we have seen.  What this does though is give you more freedom to build some fluffy lists.  Is that worth the occasional douche canoe armies?  In my book it is.

Now we are still long on details so no need to get all upset that this is ruining things.  There is going to be some bonus for sticking with the force org, which I like, so if you want to limit yourself to the force org, you'll be rewarded for doing so.  And who knows there may be some negatives for going unbound.  All in all I am liking the sound of this and it will be really interesting to see how it will work out.  No need to run for the hills.

Psychic is looking to be getting some significant changes.  A new phase will be added and it is looking to be a lot like fantasy magic mechanically speaking.  I am not too familiar on how it works in Fantasy but the consolidation into a single psychic phase does not look too bad in my view.  It simplifies things and consolidates them, so no forgetting which phases you have to use each power in.  Perils is looking to be reworked into its own table, which I kinda like, especially if demonic possession can become a possibility.  I have read too many stories of that happening and it will be cool to see that finally on the table.  Demonology is looking to be an new table, it was used as an example in the WD.  Basically ezekiel summoned a bloodthirster, though it seems he was killed in the process.  Of coures people are freaking out because ezekiel would never do that.  Calm your tits, it was an example and it doesn't seem like every army is going to have access to it, it was made pretty clear in the WD that his opponent allowed him to use it, seeming to mean he was not normally allowed to.  Time will tell and I think its a nice addition giving how prevalent deamons are in the fluff in terms of psykers.

Will be interesting to see how psychic powers all work out but so far I am liking the look of things and it will be a lot closer to the fluff than before with more risks to using your psykers.  Now not a whole lot of details are out so there should be no jumping the gun here.

Another interesting change is with objectives.  There is supposed to be a new objective deck that you draw during the game.  Now mission objectives seem to still be in as well, so this seems to be optional secondary objectives to add complexity and give additional options for scoring.  I really like this idea as some games can boil down to who gets first blood and this will add a little more and give you a chance in certain games where traditional scoring can be much harder.

Of these changes I am liking them all so far.  Time will tell and the devil is in the details, so until we see the rules in full it will be hard to say either way.  Though the force org changes can be abused, there is little trouble with that already so really hard to see how this will make things worse.  And from a tournament perspective, I seriously doubt unbound will be allowed in standard tournaments, so if that is your worry I seriously would not concern yourself.  I like the sound of changes to psychic powers and mechanics, and the new objectives sound quite good to me.  We shall see how things turn out in a few weeks, but I would not worry.