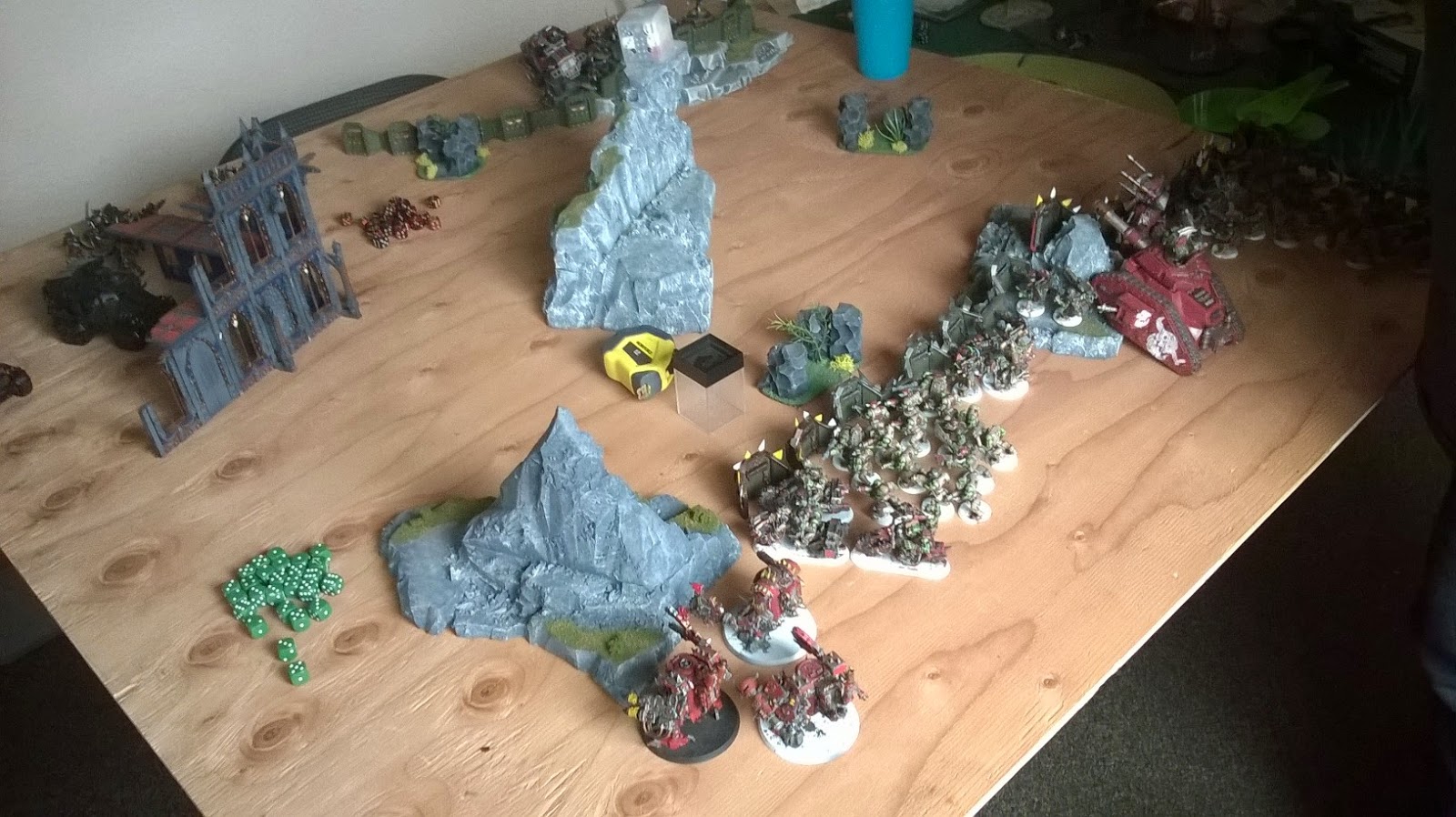 First test game of 7th, no psykers for each us so I cannot report on that phase.  I played with my Scions against my brothers orks.  He had a shiny new aegis line and dakka jet to try out.  I will say that mos things are the same, but the few differences are important to make sure you do right.  We did not play maelstrom missions as I do not have the cards and did not feel like rolling D66s all the time.  We ended up rolling purge the alien, so kill each other.  As stated game was at 1250pts, and as far as the new set up, only thing that made use of was rerolling warlord traits, which I ended up getting leadership 10 for my scion commander and my brother got the -1 to my reserve rolls.

As far as set up, it seems to be easier, since you just place terrain and agree on it, there shouldn't be a whole lot of time spent here unless you are really fussy.  Objectives go before rolling for sides, but in our case we had none except kill each other.  I ended up winning the roll and chose to go first and picked the far side of the table, I like that you choose whether you are going to go first or second, and if you do go second your opponent gets to choose his side.  We had the standard deployment (dawn of war).

I brought three scion squads, two with plasma guns and one with meltas, two command squads one with two meltas and one with four volley guns.  Three tauroxes, two missile and one battle cannon with stubber and autocannons.  I had a valkyrie with MRPs and heavy bolters and an aegis with quadgun.  My brother brought a 16 man shoota squad and a 30 man hard boy slugga squad, a big mek with shock attack, two 5 man loota squads, 3 killa kans with grotzookas, 3 nob bikers, dakka jet, looted wagon with hard case and kannon upgrades, and an aegis with quad gun.

I deployed with my aegis on the hill on my left flank (right side in above pic) with one taurox and a plasma scion squad and my melta command squad.  The rest deployed behind the ruin to move up, with my other two squads in the tauroxes and the command squad hiding behind. I cheesed it a little by facing sideways for the free pivot :p.  My bro gave me shit for it, as he should.

Brother deployed his aegis in a long line across from mine, with his two loota squads on either side of the hill, one on the quadgun and his mek in the other squad.  His big boy squad deployed to the far right, his bikes and kans on far left with shoota squad next to his bikes.  His Wagon took the center.  And he failed to sieze and thus began a frustrating game.

My infantry on the left stayed put.  On the right (pic left), I moved up to the ruins and attempted to disembark my guys to get onto the ruins, instead I rolled two for both squads despite move through cover, I rolled a lot of twos and ones this game.  So there was a cluster fuck at the bottom of the ruin.  Shooting I fired my missile tauroxes at his kans and killed one.  With my other taurox and the remaining shooting I killed three lootas and one shoota boy with a scatter.  I also caused one wound on a biker. My quad gun got lucky and took two hull points off of his wagon. 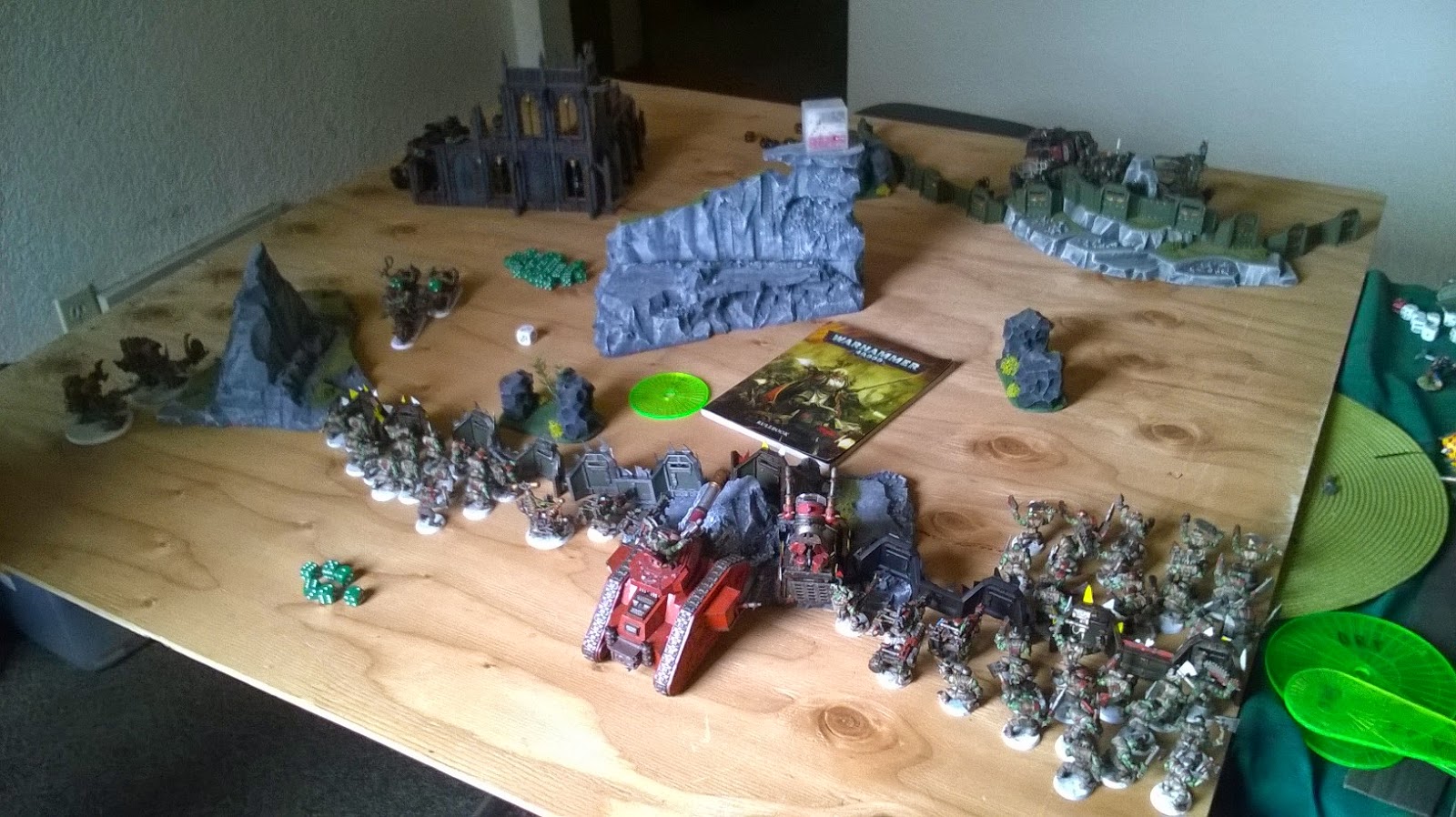 His turn he moved his slugga boys out, his bikes up though one lost a wound to dangerous terrain.  The two kans moved up around the hill.  The bikes fired at my few guys on the balcony and killed 3 of them form my melta scion squad.  His kans scattered off of my taurox and failed to do anything.  His wagon fired at my squad on the quad gun, killing one but my cover save for my taurox passed.  Next came his shock attack gun, which of course rolled double 6s, he killed three scions around my taurox in the corner of the ruins and was able to shake the vehicle.  Luckily for me the bikers failed their charge distance by a couple of inches. My scions failed their morale check and ran away. 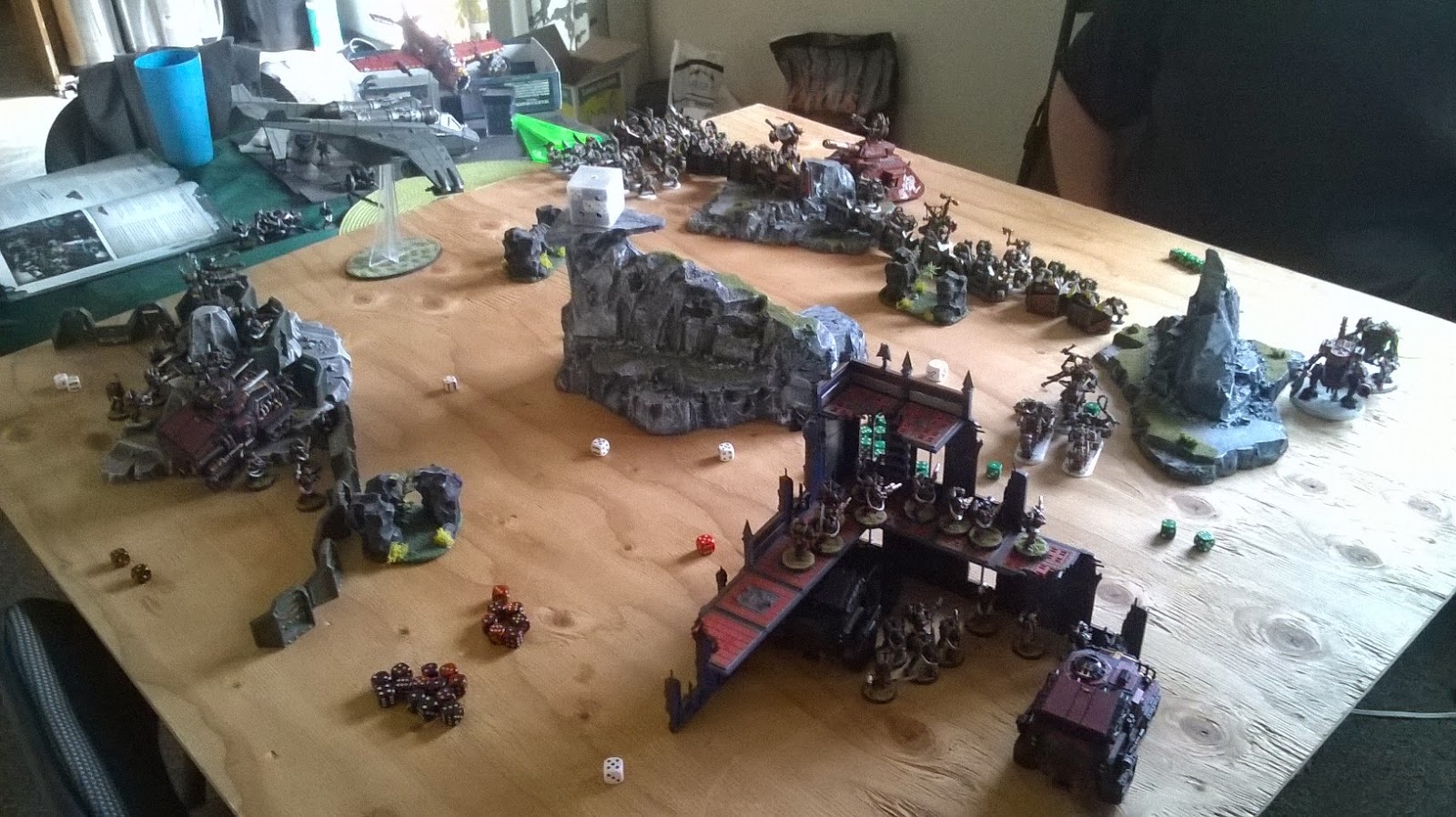 Beginning of turn two my valkyrie comes on despite his warlord thankfully and lines up for a shot at his big boy squad.  My squad regroups but I forgot to do it till my shooting phase so they did nothing that turn.  My battle cannon taurox pivots to take a shot at his second loota squad on the quad gun.  I order the pinning rule on both my scion squads still in the fight, and kill two bikers and three boys from the big mob.  Then the valkyrie fires tis MRPs and gets 23 wounds and 14 fall dead, he had hard armor so 4+ save saved him.  My taurox killed two other lootas, they stayed in place.  The quadgun managed to get lucky and finished off the wagon, wrecking it.  My last missile taurox took off one hull point on the front killa kan.  He intercepted my valk and took a hull point off but nothing else. 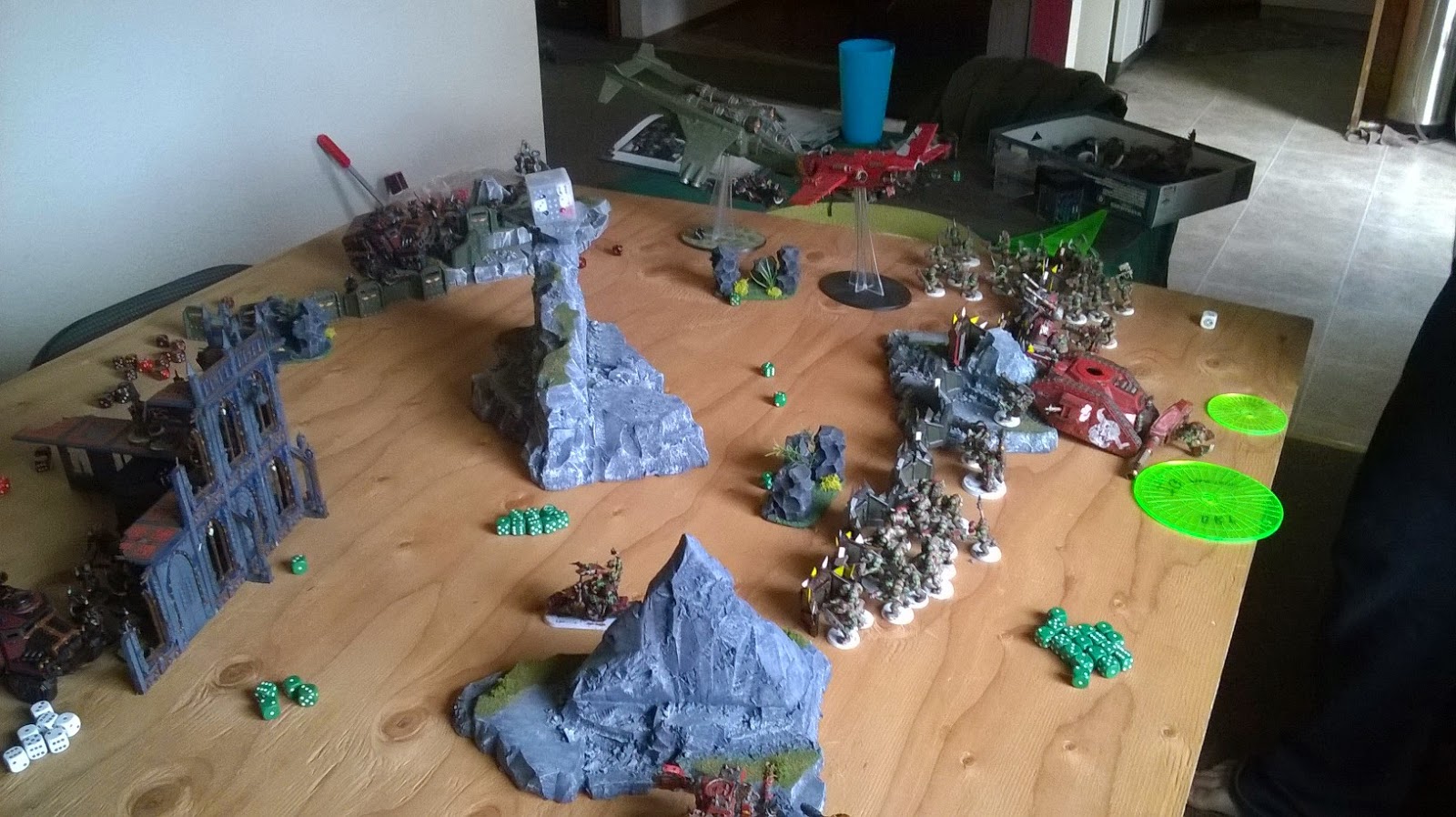 His turn he moved his boys out again, back to where they were before the valkyrie opened up.  His dakka jet lined up to take a shot on either the valkyrie or my troops near the quad gun. His bike moved up to go after my taurox and his kans continued to move up.  His shoota squad moved out.  He opened up with his lootas and downed my valkyrie, which scattered onto my guys but I luckily made my 4+ armor saves.  His shoota boys opened up and killed all but one of the plasma vet squad in the ruin.  The killa kans shot at my command squad, they went to ground and I only lost one thankfully.  His bike charged, hammer of wrath did nothing and he only got two hits.  This is a nice change to the game with vehicles only being WS0 if they are immobilized.  Luckily my taurox survived with one hull point left, though it was immobilized by his last attack.  The shock attack gun fired again at my taurox, I made my cover saves here.  I believe his dakk jet fired at my quad gun and took one wound off of it. 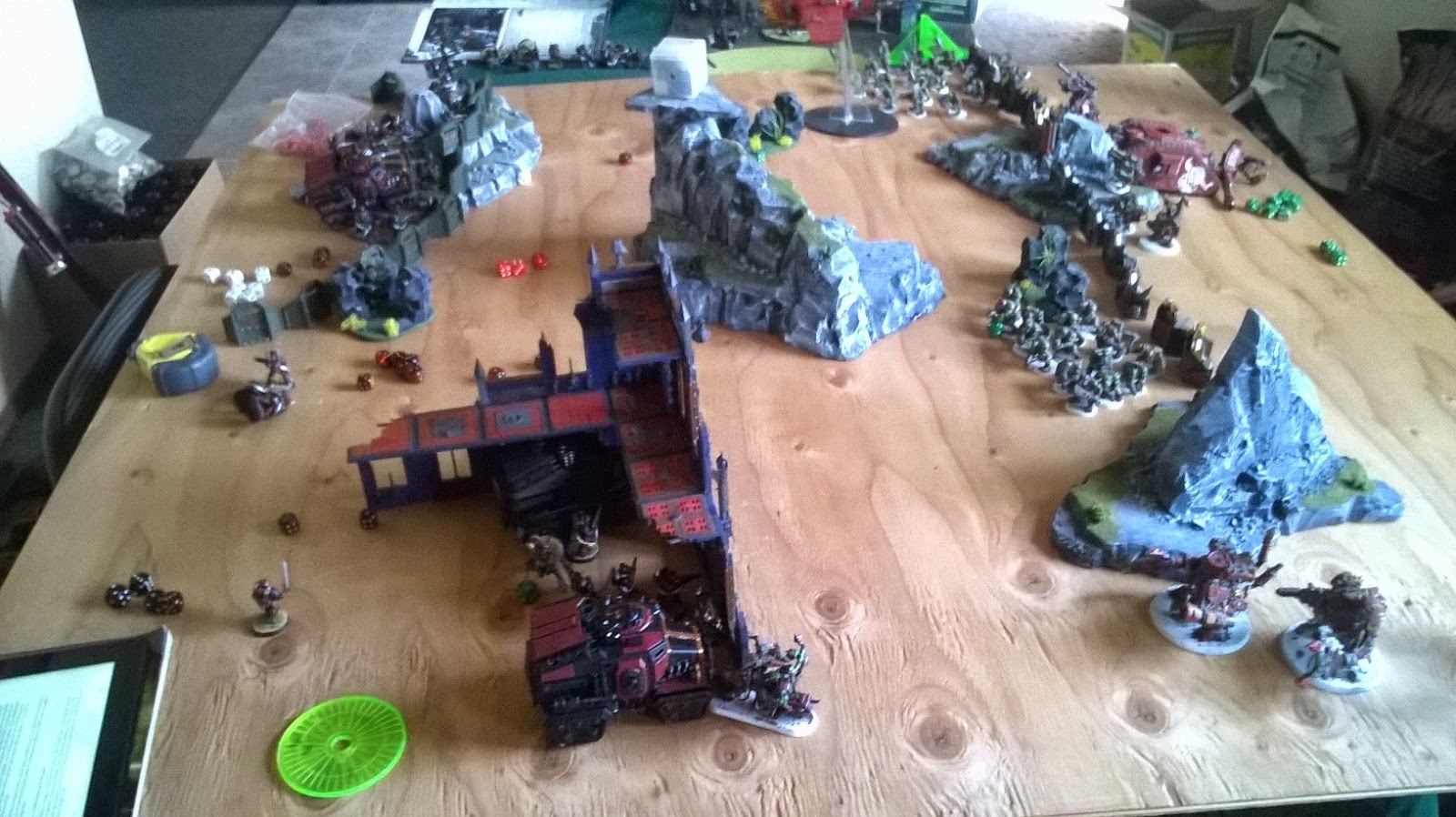 My turn I move my melta squad into line of sight to kill the biker, my lone survivor moves into my taurox and my command squad is cowering in cover.  Thats all for movement, I pivot my taurox to make sure that I kill his killa kans.  Firing I order the sniper order onto my squad, with a melta and a couple of hot shot wounds I finish him off.  My missile taurox kills one kan, and the battle cannon taurox finishes the last one off.  My quadgun fires and gets two pens on his dakka jet, destroying one gun and stunning it, forcing it to move 18" forward which sends it off the board in his turn. 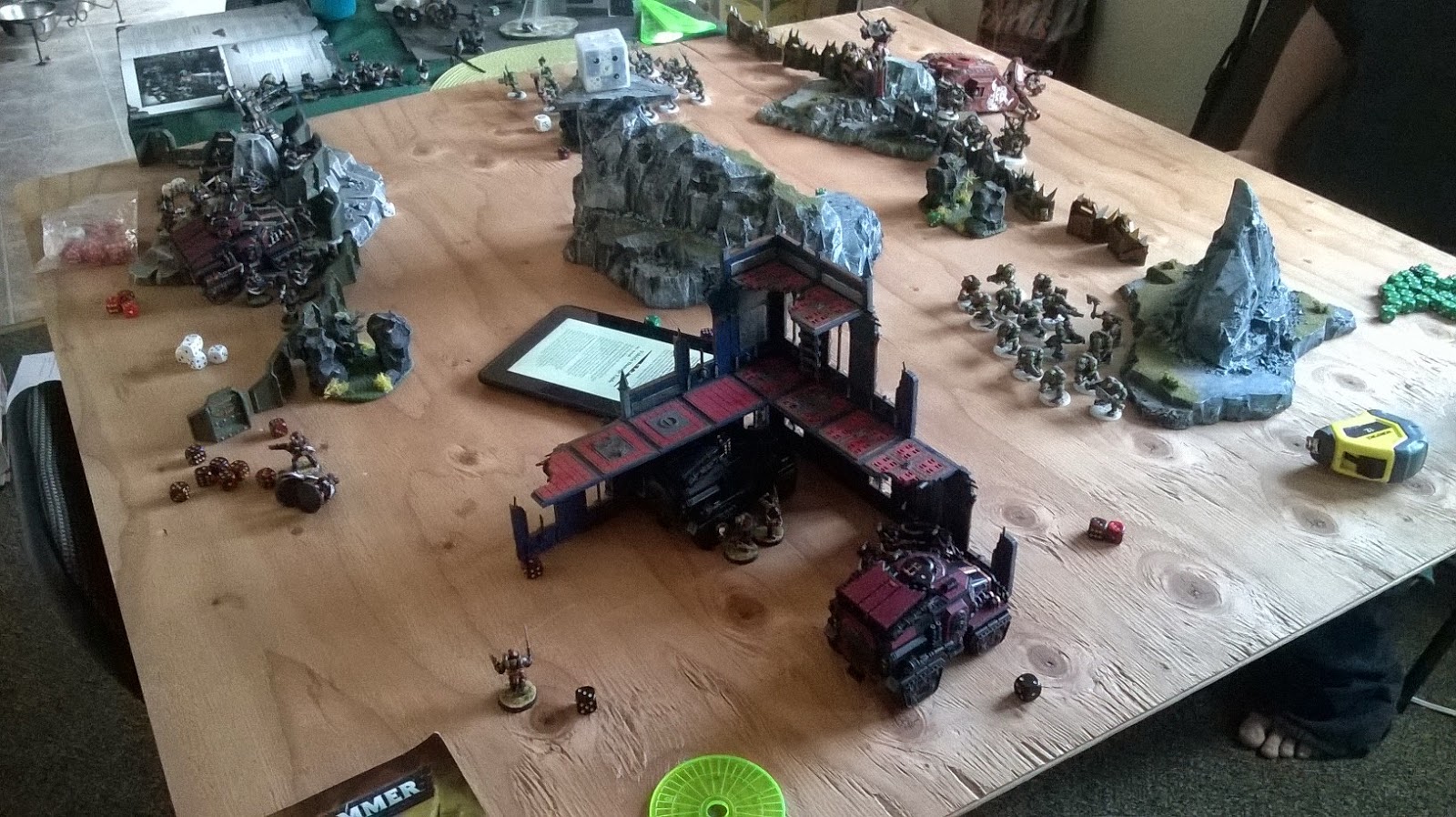 His turn he moves his boys up, both squads of them.  His shootas get line of sight on my command squad going to ground and he trys to shoot them, but I make all my cover saves.  His shock attack gun rolls low again and I make my cover saves.  The def guns roll low and he only kills one scion on the left.  His big mob runs a few more inches forward.  And his jet goes off the board.  At this point I am in the lead but he could turn it around with his turn, though it may not seem like it I was rolling horribly except for my vehicles, which carried my through this game. 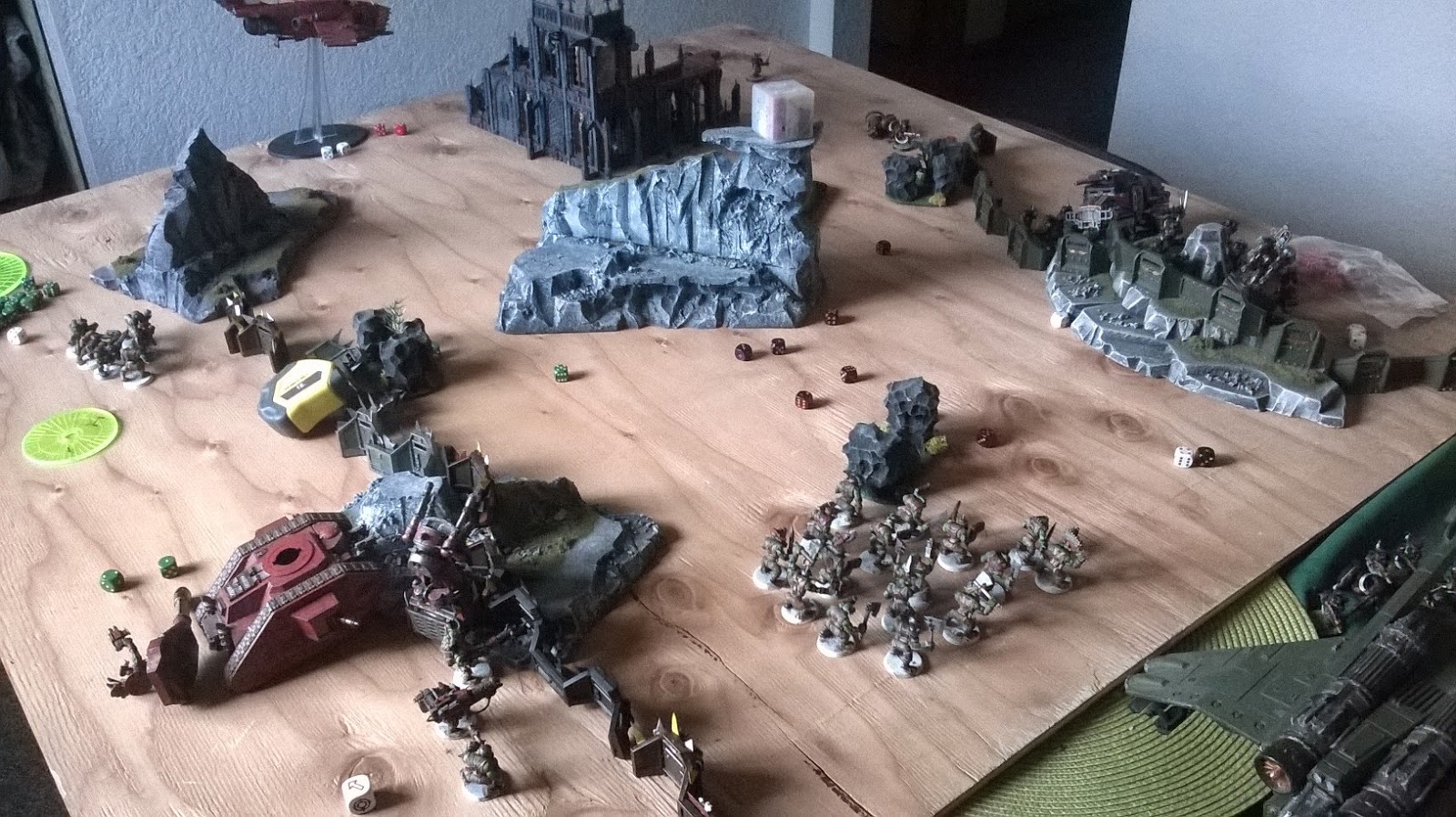 In order for me to survive I had to drive his boys off and either kill or move his mek, whose shock attack gun had killed quite a few during the first two turns.  Everything left on my right fired at his boy squad, and I whittled them down to 7, forcing a morale check, they failed and ran back behind the aegis line.  I then focused the rest of my fire on his mek and two lootas, I killed the two lootas and the mek failed morale, but was just on the board.

His turn, his mek failed to regroup and ran off the board, he used his boss pole to rally his boys behind the line.  His jet came on towards the ruins.  I intercepted it and took away its last hull point, it blew up on open ground.  With only a few boys left and a few lootas, he called it. 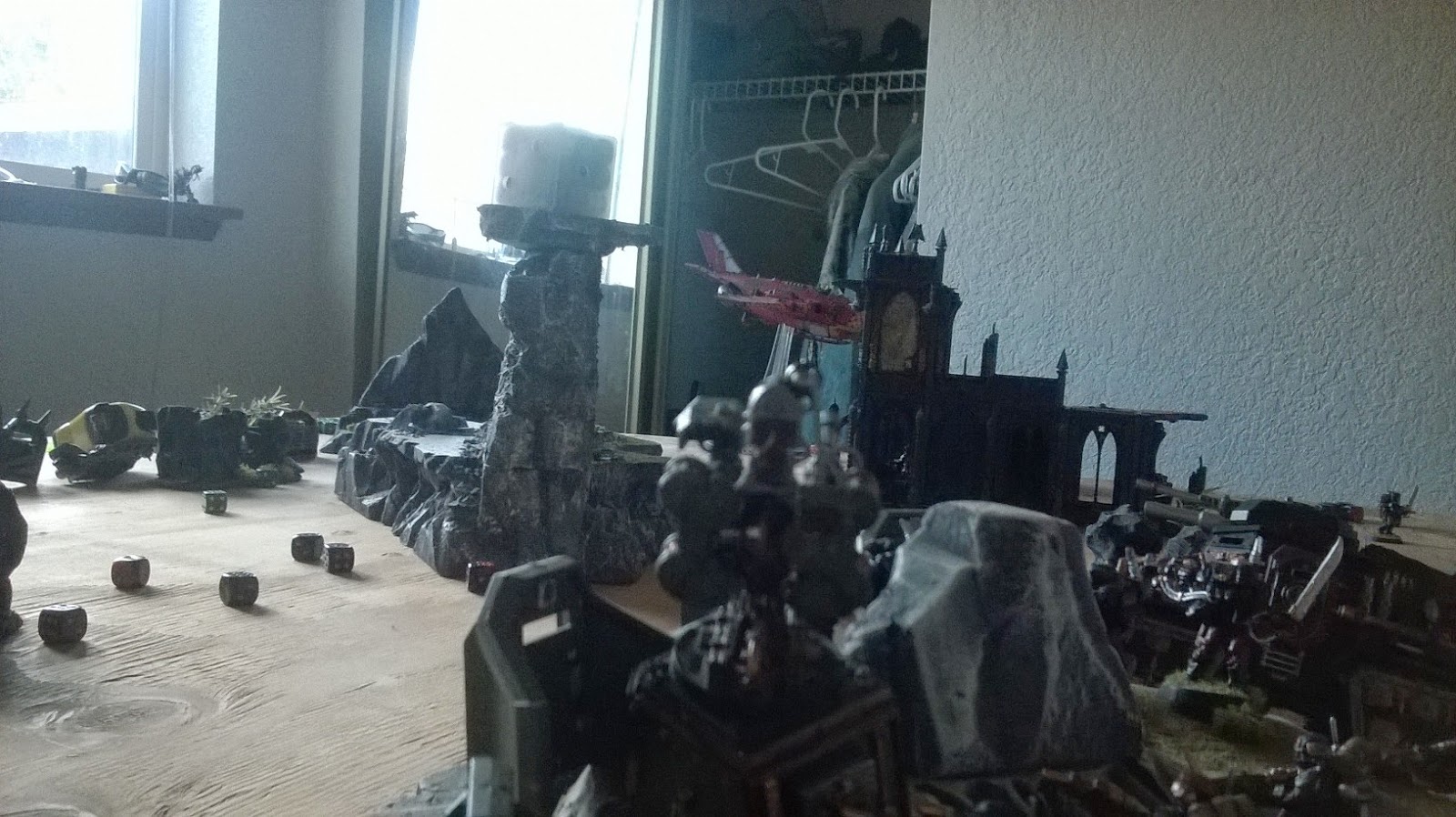 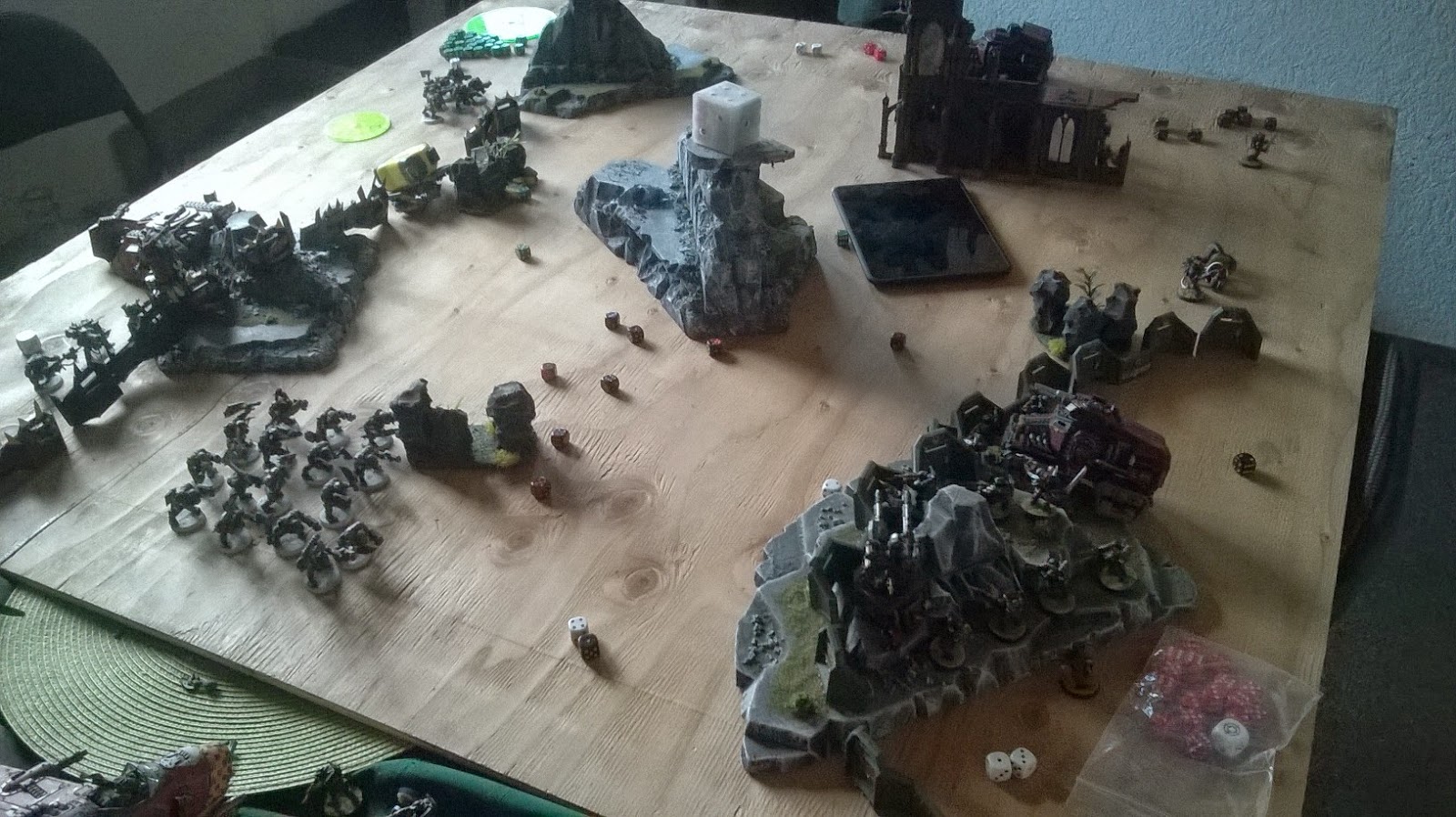 Though it may not seem like it, it was a frustrating game, I rolled horribly through out most of it and my brother did not have luck go his way either, he could not touch my tauroxes when he needed to.  All in all it was one of those games that is hard to enjoy.  I ended up with 7 Vps and he had 2, he got first blood with the valkyrie and I got slay the warlord with with his mek.  He was unable to finish any of my squads off even though he got a few of them down to only a couple of guys.

I am impressed with the scions capability to just hang on, I really did not think I could pull it out as by turn two it looked like he nailed me to the wall.  Being unable to finish off my vehicles saved me.  Overall the changes to game while minor do have an affect. Shooting order is much more important and making sure models are lined up is critical.  The -2 to charge distance hurts as well, making sure you are close to terrain before charging makes a huge difference.  Vehicles always being WS1 unless immobilized is also big, they are much more survivable in CC now.  Jink is much less powerful as you really have to take a risk as you don't even know how many hits are going to be made.

All in all I am liking it, its a lot to take in and is going to be a few games before I get the hang of the new changes.


Posted by Grumpy Guardsman at 7:17 PM