Astra Militarum Tactics: Changes to Leadership & How it Affects Priests and OoF 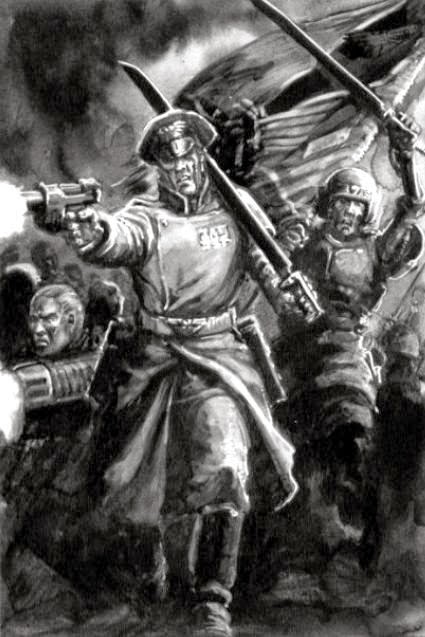 With 7th edition comes a slight change to leadership that affects two units in the Imperial Guard codex in particular.  I am talking about the Officer of the Fleet and the Priest.  I will go back and edit my OoF post to bring it in line but here I will cover how the leadership changes affect these units.

What this means is priests war hymns will only be successfully taken on the leadership of the priest himself.  The same goes for the Officer of the Fleet (OoF).  What does this mean, well simply that they are going to be harder to pull off now.  Luckily both are cheap and priests are easy to come by, with OoF having to be part of a CCS, they are still accessible but not on their own.

In order to be more effective, you'll need more of them.  Before doing this though, decide whether you really need the abilities that they provide.  Sure the Hymns are great, but if you don't have a dedicated CC unit, his abilities are not as useful.  Remember that fearless prevents going to ground, which I personally use a lot so cheap commissars are a better option in my opinion if you are just looking for leadership boosts.  If you do have a good cc unit, then two to three priests are what you should be bringing to make sure you are getting at least one hymn off.

In respects to OoF, its a harder choice.  If you are sticking to a single battle forged detachment, then you only have two dedicated HQ choices, so in order to make this work well, you will want two OoF for reserve bonuses or denying your opponents.  That means two command squads.  Now I like bringing two as more orders are always good, but it doesn't fit every list or army style.  So decide if you really need that bonus to your reserves or the negative to your opponents.  I do like having them and the option they provide is good.  If you are only taking one CCS, still bring one as they will still go off, just not as reliably.

Now you can alleviate some issues if you start using multiple detachments.  Two detachments will give yo up to four OoF and six Priests.  Now you certainly don't need that many, but in the case of the OoF this allows you to still take other HQ choices you want and two CCS's with OoF.  This will be up to you and how important you see there abilities working in your army.  More than three OoF is most likely unnecessary and you should probably keep to three or less.  When it comes to priests, its dependent on the number of CC units that you have to make use of them.  Two per is a good rule of thumb, as you have a high chance of getting at least one Hymn off, two if your lucky.  It is important to note that as ICs, they can move around as needed, so you do not need them in each of your CC squads at the beginning of battle, just at the point they will be in CC.  Move them around as needed and if you have points you can always bring more.

I know this is more of a PSA than a straight tactics article, I just want to make sure IG players and others are aware of how the new rules affect these units.  They are still very good for their points if just a little less reliable.