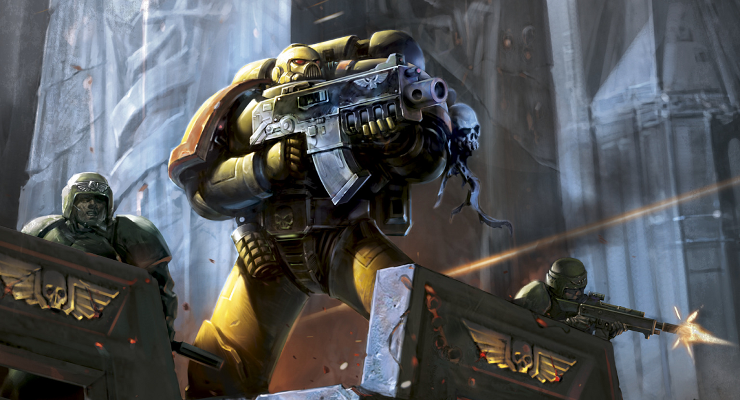 Now we have some confirmations of the rules for Battle Forged and Unbound armies and they are looking to be good.  The revealed bonuses for Battle Forged armies are actually quite good and are in my opinion going to help balance out the game a bit and help against some of the more common deathstar armies.  Now that I have seen it I am very happy with what is coming.

Here is the leaked pic that sums it up pretty nicely: 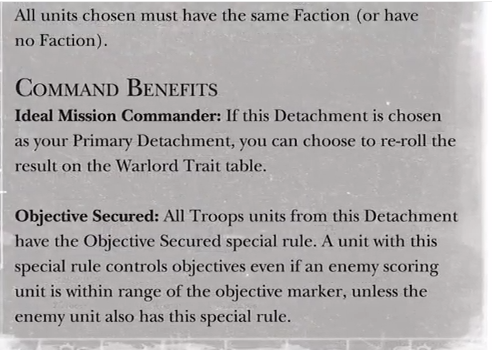 You get two nice bonuses for sticking with the standard force org, as well as some other implied ones that I will talk about in a bit.  So first off you get to reroll warlord, this will be great with creed and rerolling both of his traits if needed, I see him going strong in 7th.  The other is even better and that is Objective secured which gives all troops in your primary detachment that rule, meaning those units will control objectives even if normally contesting units are within range, as long as those units do not have the same rule, then they can contest as normal.  Note it only works on your primary detachment, no allies, formations etc.

This could be quite a big boon and is more than enough for me to continue using the force org chart.  Its a great bonus over unbound armies and actually a few of the deathstars that are out there.  The ones that I am thinking of is the jetseer.  Since the council and farseer(s) are not troops, the standard tactic of flying to the four winds at the end of the game will not be as effective as your troops will have to be killed or driven off of objectives for it to work.  Only eldar jetbikes as troops can pull this off, and they are far easier to kill, so you know what your target should be.  The beast star will have issues with this as well, though it is better equipped to fight in cc and drive units off, it can only be in so many places at once and cannot contest your troops, so they will again have to either be wiped or driven off.  Against the marine bike star it won't be as effective since a lot of the bikes are going to be troops, but with less models and having to place them in harms way, focus on the troops and worry about the star later.  All in all this could shift the game away from the stars.

I like that the intent of this is to try and push you towards a more balanced army and to actually bring troops to benefit from this rule.  So if you are taking force org but not a lot of troops, you are probably going to be doing it wrong.  Unbound is here now so if you want an all elite army, you can get right to it.

Now the interesting part is that it seems that unbound armies cannot take allies, only formations are allowed as an extra thing to bring along.  It is not confirmed whether they can take fortifications or lords of war, but most likely will be the case.  There are some rumors that unbound can pick their force from whatever they want, but I have yet to see something hard on that and I seriously doubt it.  Most likely you will only have freedom to choose within your codex, though the mentioning of factions is interesting and that may change things depending how that is done.

These changes alone could change the game quite a bit.  I say could because only time will tell, but I really see the bonuses for Battle Forged troops being enough to balance the equation against the deathstars that are out there and act as a good foil against unbound armies.  I really am liking this and the new freedom will be good, there are certainly some armies that will be a lot of fun to play and you can do now.

The boons will help IG a lot, as a troop based army, our troops are now better than ever and will be holding onto objectives until the last against a lot of armies.  With unbound this will help out some builds quite a bit, mainly the Militarum Tempestus, giving access to more orders to really help that army out.  Obviously many have already thought about an armored company and it would surely be fun to bring as many tank commanders as you can to have an army of tanks with orders and a bunch of BS 4 guys thrown into the mix as well.

I welcome 7th and the new opportunities that it will bring.