Psychic Powers and the Astra Militarum 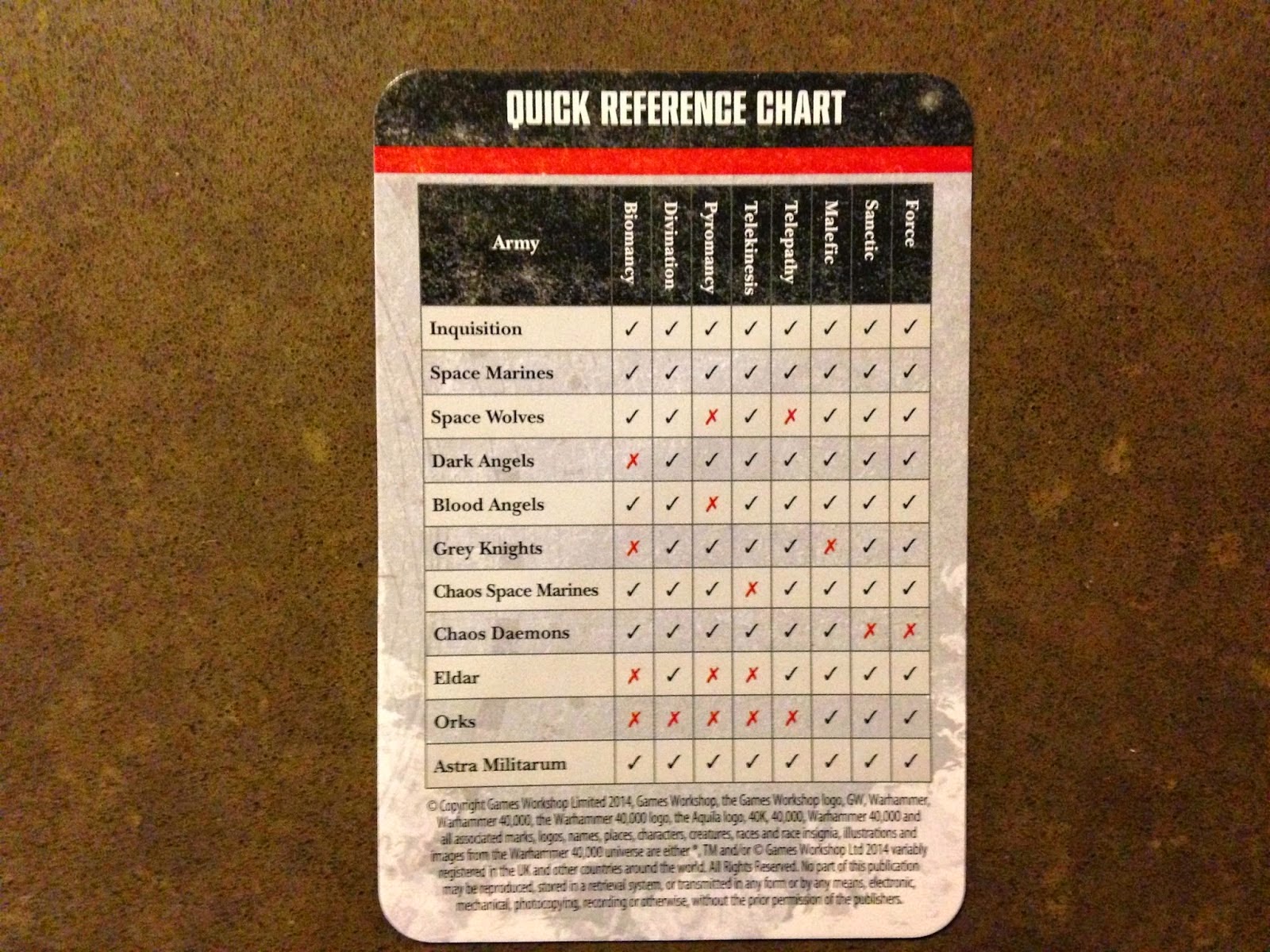 Well the cat is out of the bag and the tables have been leaked.  The biggest change though in my opinion is the above, the psychic table quick reference chart.  This shows what each faction can choose for powers.  For us Imperial Guard players, this is a nice change as according to this we can access all of the tables.  If you are wondering what force is, its basically the force weapon rule, just rolled into the new psychic phase for completeness.  If you want to see all the pics head on over to 40k deamons for the full pics.

There are a lot of slight changes to the disciplines.  Some powers have been moved and a few replaced and others got warp charge increases.  The first is in Divination, prescience surprisingly stayed the primaris but now is WC 2, which is a fair increase for such a beneficial power.  Not much else changed in divination except misfortune changing to causing rending for all weapons fired at the targeted unit. Scriers gaze is WC2 as well, but with officers of the fleet, this is less useful for the IG.  Divination is still a strong discipline and now that you can roll on the table and still keep prescience, there is little reason to roll on anything else for a ML1 psyker.  You have prescience and one of the other powers, with nearly all being useful.  With the WC increase, it may be good to up the ML of a primaris psyker, plus it would give you three divination powers, giving you a very useful psyker that can do quite a bit.

Now the real question is wrydvane psykers a good choice and what should they take?  I do think they are a good choice now and with all of the tables opened up, its something that is in strong consideration.  For me I would keep my primaris psykers as the main buffers with divination, and go with telepathy for the wrydvane's.  Shriek got an increase to 18" which is a very nice bonus, and you get to roll on the table for another good power.  Sadly puppet master is gone, but I understand why.  In its place shrouded, which gives units within 6" the shrouded special rule.  Invisibility did change in that the targeted unit can only be hit with snap shots and 6s in combat, I think this was a good move to take shrouding away and make its own power.  Overall the telepathy table has changed little and I am glad for it, it was good before and is still good now.  This is a strong contender for wrydvanes, throw them in a transport to have a cheap unit throwing psychic shriek around and use whatever else you roll if it suits you.

Now there are other tables to roll on, and are a good option if you really want it. Pyromancy is slightly better, but too many of the attacks are only ap5, and the fire shield is a cover save so its good but can be gotten around.  Not too bad but I think its utility is limited for IG psykers as a lot of them require you  to get close and support a more assault oriented psyker.  Inferno is WC2 now, but is probably the most solid power for wyrdvanes with it being a large blast with 24" range, though its only S4 AP5.  I would take telepathy over this, but it could be useful if going against a nid or ork army, really any army that has a lot of 5+ or 6+ saves and rely on cover.

Santic is basically a lot of the grey knight powers slightly tweaked with a few new ones.  Because you'll peril on any double, I would stay away for this.  The potential is there and unless you are facing a lot of deamons its a high risk low reward table. Interestingly vortex of doom was moved here and its S D and vortex, so it stays on the field.  Also gateway of infinity moved to santic as well.  Not too frightened of this and I understand why it was moved so the table had at least one big powerful offensive power.  With the D nerf, this will be strong but not game breaking, plus its a small blast, so hardly going to be taking away swathes of your army.  Again, unless you are facing deamons, its not worth it, and even then other tables should be considered, if only for their reliability.

Telekenis got some changes with powers being moved, and overall I think it is a solid table, if the primaris is only meh.  Strike down is the same, a beam with S6 no ap beam with 18" range and strike down.  Its decent and a good way to hurt a unit that is about to charge you or you are going to assault (with another unit, not the psyker itself).  The other powers are unchanged from what I can see. The two new ones are Levitation wich allows the psyker and his unit to move 12", though they may not assault.  This could be a way to get away from an assaulting unit, or move a shooting unit into better range.  The new big one is psychic malestrom, which is S10 AP1 barrage large blast 12".  Its WC3 so sadly this will be a hard one to cast successfully and if you get it, you'll have to focus a lot of dice to get it to go off.  That being said, a wyrdvane group that gets this can do a lot of damage, but you'll be using most of your dice to try and get this off.  Over all telekinesis is a good choice, just not great for wyrdvanes.

Biomancy received some changes, mainly the d3 rolls got replaced with straight +3 bonuses.  Endurance is nice, giving 4+ FnP and eternal warrior to targeted unit.  While I like this discipline, the problem with it is that too many only target the psyker.  And IG psykers are not that amazing on their own so they lose some of effectiveness.  Smite is ok, but at only 4 attacks it kinda hurts a unit like the wrydvanes.  But the risk of getting an only semi useless power may be worth it.  Life leach can give a wound back to a friendly model in 6" now and enfeeble is still quite good.  It would not be my first choice but it could work.

Overall the powers are looking good and I like the changes.  Wrydvanes best bet in my opinion is going to be telepathy, maybe divination, then telekinesis.  Pyromancy can be situationally good and if you are playing against another IG or Orks or other 5+ save armies.  Wrydvanes are certainly playable now and have some good choices when bringing them.  They will get two powers, with at least one being useful and hopefully two.  Primaris psykers are better and upping them to ML2 is a good option to double down on the divination table.

The perils table has been leaked and it looks good, no deamons popping out of your psykers head.  For most you take a leadership test and only if you fail do you suffer a wound.  A 1 is the worst, your psyker gets sucked into the warp and guys around him suffer a nasty hit.  But a 6 gives you some very nice buffs if you pass the leadership test.  I really like the table, head over to Faeit to see the details on it.

Interestingly the one of the powers seems to make the -2 for snap shot rumor appear to be fake.  It states that you can fire in overwatch at full BS instead of BS 1.  So most likely snap shots will not change as previously rumored.