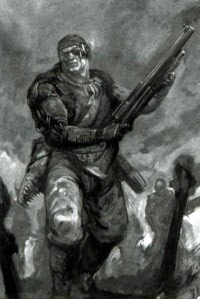 Colonel Straken is the last on the special character HQ list and he is another badass of the bunch.  He has gotten a significant price bump up to 130 but is still a very good choice for your warlord in your CCS.  The key here though is that he should be your warlord, you lose enough by not taking him as yours that you should reserve taking him for your warlord.  So what does he have.

Despite his price increase he is similar to before.  He has a beefy stat line with WS5 BS4 S6 T4 W3 and a 3+ save.   He has flak armor, plasma pistol, shotgun, ccw, frag grenades, and a refractor field.  He has shooting weapons to deal with just about any target.  Against low toughness opponents he has a shotgun to get more wounds and a plasma pistol to deal with tougher targets.  Now here is where things get interesting.  His warlard trait is implacable determination which gives his unit relentless.  Hello plasma guns and assaulting.  His special rules are fearless, monster hunter, senior officer, voive of command, and importantly smash.  Smash means his attacks are always at AP2, and with S6 he is punching things to death.  Cold steel and courage is similar to before giving furious charge and counter attack to astra militarum units within 6" of him.  This includes his own unit.  Gung ho means he must issue and accept a challenge whenever possible.  In his case this is not too horrible as he can punch a lot of things to death and being able to hit at AP2 and initiative helps him out a lot here, plus with a 3+ and 5++ means he can take wounds and survive, especially with a few support units.

How you should be building his command squad around him is very important.  You want to take advantage of his rules that he provides his squad and make use of them.  Relentless is important here, it allows heavy weapons to move and shoot and other weapons to assault as well as shoot.  Plasma guns jump out at me here, but heavy weapons and the MoO are a good choice as well.  A medic should be taken here to make sure straken stays alive, with his higher toughness and saves, he can survive more wounds than standard guardsmen.  This squad is going to epitomize the Combat Command style of CCS and you want to get it into combat.  Support characters to include are priests and commissars.  Commissars are good for another power weapon in the squad and priests for when you get into close combat to reroll saves or wounds, whichever is more important at the time.

Now since his squad is already fearless, keeping the priest in the squad for the whole game is not necessary, since more of the bonuses are for close combat, he only needs to be there when the squad is charging in to combat.  You want to make use of his cold steel and courage rule and keep a couple of squads nearby.  Move them around with straken to support his squad and take wounds when necessary.  These squads should act as a team, moving around and targeting similar units and assaulting them to finish them off.  A few small blob squads are good as well as some vet squads with carapace and shotguns and assault weapons.  Melta guns are good so that you can move around and take out vehicles and a heavy flamer to take out masses of infantry.

The army you want to build here is an aggressive one, one that is going to be moving and hitting your opponent and getting close.  Use support units like wyverns and other artillery to pin your opponent down and cover your advancing force.  Leman russes are a good choice as well to give your army heavy armor but you should keep it minimal, the point is to give support and targets for your opponent to shoot at over your infantry. The infantry is going to be your key players and other units should be kept in mind for supporting roles that is going to make their job easier.

In terms of infantry there are a few ways to go that will work with straken.  You can go for massed infantry with blobs and conscripts to provide target overload and ensure your key infantry units and straken get to where they are needed most.  The other is going with a more elite army and loading up on veterans and a few scions or even a bullgryn squad if you feel the points are there.  A mech army can work, though keep in mind that you will not be doing assault when you disembark so make sure you can kill the high threat units when you pop out of your chimeras (or tauroxes).

The key to straken's army is mobility and aggressiveness, take the fight to your enemy and never let up.  Pin them down and get straken in to punch stuff.  Keep infantry close to support him and make use of his rules.

One unit I have not talked about is Nork.  He is an upgrade to the CCS and is something to be considered here.  He is tough and has good attacks and and take quite a lot of wounds.  Plus with FnP he can tank wounds that would insta kill even straken and you can look out sir if you are worried about losing him.  He is something to consider with straken as he adds another beefy character and will significantly boost the squad surviving close combat and even some shooting.  Make sure though that you have your bases covered first before bringing him.  He is good but not that good that he should be taken before you have your solid base of infantry.

Straken is a great HQ choice and certainly competes with yarrick as a combat character, each has the benefits and both support the troops around them in different ways.  Straken provides more combat boons and this should be taken into consideration when choosing him over yarrick.  Yarrick holds the line better while straken takes the line better.  All in all a solid fighter that makes your army better.
Posted by Grumpy Guardsman at 12:04 PM