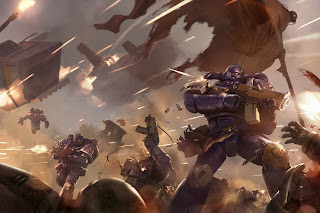 Alright, so I know I am a IG player, and that is what this blog is mostly about.  But like just about everyone in the hobby, I have a place in my heart for Space Marines.  One of my favorites stories in 40k is that of the Soul Drinkers chapter.  I love how it skirts the line, at once they deny the Imperium and Chaos, taking sides with neither and eventually going to their honored doom.  So my brother and I have decided to start a joint army, the Soul Drinkers.  We have both donated models and have more marines on the way to create them.  I personally love to kit bash and can't wait to make Graveus, Luko, Sarpedon, and even Iktinos, and of course Lygris.

The army is going to be an assault heavy, sticking with their theme of a boarding and fast orbital strike force.  Plan on seeing lots of Drop pods and Storm Raven's, Psykers and Tacticals and even the maligned assault marines.  I don't plan on making just a cool show piece army though and have thought a lot about how to play them.  I like the drop army and I think the Sentinels of Terra CT's will work very well with them, getting those twin linked bolter weapons be all I need.  So on to what we have made so far: 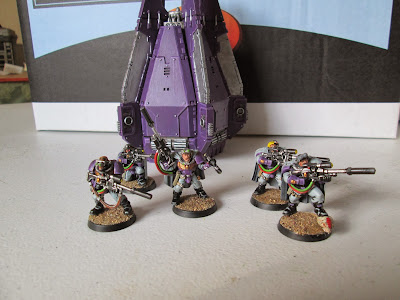 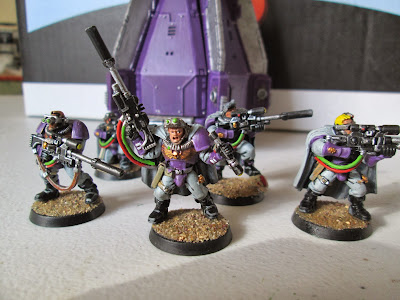 While I would love to take credit, my brother has painted these bad boys.  The drop pod is mine, I provided it to the cause, and my brother provided the scouts.  As time goes on will make a more weathered and battle worn look.  This army will be taken from around the time of the second chapter war, a little after Sarpedon reasserts control but before they flee into the veiled region. Will prob eventually include Iktinos and his flock eventually, but right now they will be the last to come about.

Anywho that is where we are, and I will keep posting more as this army comes along.  More than welcome advice on what models to build and also what tactics to use.  Gimme your thoughts, I am open to hearing what you all think about how the Soul Drinkers should be.