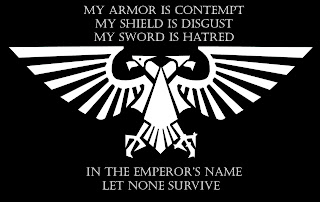 First off I want to thank everyone, all your comments and support has been awesome and keeps me doing this blog thing.  Its nice to know that there are others out there that enjoy and believe in the same things when it comes to our hobby.  Though I make it a point not to bring my personal life onto the blog I will make an exception here.  For everyone here in the states I hope you are all having or had a great thanksgiving, no matter where or who you spent it with.  I just got back from visiting my wife's family, long drive but it was a good time.  Good to be back home though and get back to warhammer.  To those of you heathens not in the states, well I hope you all had a great week and things are looking up.
I was very happy to see when I got home that my inquisitor had finally arrived, seriously GW did you ship it by pony?  But I am happy it is here and you all may see a primed inquisitor doing his thing this weekend, if the emperor lets me that is.  I am hoping, games have been sparse lately, but that is life.

Since I really haven't been too heavy on the gaming side but have been keeping up on models and such, I kind of want to continue the proxy discussion, especially in regards to allies.  Now a lot of us love to use allies for the options they bring on the table top in regards to the rules, but maybe not so much the models themselves.  I know one Mr Byrne wanted to use custom made grots as IG allies for his ork army.  Generally speaking I like this as it can add a depth of models to an army and some good support in a weakened area.  So I think for you the best way to go about it is to think of where your army is lacking, either in mobility or shooting that you can use the "guardsmen" to fill in the holes.  I don't know how you run your army, but I would throw a couple squads in chimeras with the demolitions doctrine and send them out front on a flank.

Use them as a first wave to protect your foot sloggers by using the Chimeras to block LoS and/or the same for trucks and other weaker transports.  With demo charges they can move up and blow a nice hole in an opponents line, plus your opponent will have to deal with those squads and the Chimera's again buying your boys the precious time they need to get across the field unscathed.  Best part of all this is you can do this for maybe 300 pts, depending if you go over board or not.  I would seriously consider this as I think what orks really lack is a cheap AND durable transport that can get across the field fast.  The Chimeras do this and it allows a solid vanguard strike, forcing your opponent to deal with the spear tip, or flank attack, depending how you end up maneuvering on your opponent and allowing the rest of your less protected guys to get into the fight.  Hopefully that helps.  Otherwise I like the idea of some grots that have been eating more of their fair share and have gotten bigger and stronger than the rest of the grots.

Sorry to everyone else, that was specific :).  As for allies in general, I see two real reasons to bring them over your own units.  The first and most often chosen is to make up for an inherent weakness in your base army.  The second is because its fluffy and cool.  Both are valid and can be considered.  For me I have long wanted to do a tech guard unit, I like the mechanicus and it would be great to have some awesome models to proxy them.  Someone suggested that Tau be used to proxy some mechanicus units, as with all their cool tech upgrades and advanced weapons, they would be really good as an Arch Magos and his most upgraded bodyguard and personal archeotech.  I think this is kind of cool and though some might say this is justifying power gamers(maybe ;))  I would say its not just that, some really cool mechanicus models using Tau rules would really have the right feel for them.  Also IMO IG and Tau are not the best allies.  Well let me clarify, Tau is not a great ally for primary IG, but IG is a decent ally for primary Tau.

The reason I say this is that Tau bring little to the table that IG don't already have.  Anti air, long range (IG has more and better), shooting infantry, you get picture.  Tau don't make up for the IG's weakness in CC, they actually compound it as you are spending points on units that are worse than others you could bring in your own codex.  Yeah tau have ignores cover and LoS weapons, but IG has lots of barrage which effectively do the same thing if not similar.  Tau have some cool units and weapons, but they really synergise well with their own units, not IG.  IG bring some needed bubble wrap for tau as guardsmen, esp with commissar and power weapons, are much better in CC and protecting the tau lines.  Also IG brings a good flyer and heavy armor with long range, as well as lots of guns that go beyond 36" where most of the Tau shooting stops.  So it works out well for tau, plus they can get some cheap psychic support.

The only thing I could see as really useful for IG is probably the commander batman and some crisis suits or broadsides.  You could do up the firewarriors as tech guard with advanced lasguns, and the suits could be some advanced skittari/battle servitor.  These would be cool and they also would provide some utility to the IG army from solid mobile firepower and useful abilities.  Otherwise there isn't much that is too useful in the Tau codex, IG aren't battle brothers so can't benfit a whole lot from them and when compare to other allies, there are far better choices for them in SWs and SM and INQ.

Now an important thing to bring up in all this is if someone brought out these custom models and said they were counts as something, what would you do?  For me the first thing would be that I would make sure that my opponent had all of the relevant rules for them.  They may some cool looking models and I'll play them, but you can't be going off the rules from memory either.  The other big thing is that they are properly represented, meaning that if one has a burst cannon, the model better have something that looks like a machine gun or rotary cannon.  Same goes for basic and heavy weapons.  Its fine if you want to play with your hard work and show off the models, mechanicus for example, but I need to be able to tell what they do as well and if they all look exactly the same, well then you are going to have to play them exactly the same.

Other than that I welcome playing proxies an counts as and whatever custom work someone has done.  I think it is a great way for fluff bunnies to justify allies, I fully admit that I am more on the fluff side and I would never take tau as allies to my IG, but I might make some mechanicus and use tau rules to play with them(actually I would use Inq but that is for another post).  Same may go for other armies.  I say a guy who did a custom model for his ork/necron army, he had the necron overlord model on a larger base and had an ork mek hardwired into the overlord, like he had hacked in and taken over the necrons.  And you know what, that one model made that army work for me, thats all it took, and the reason why is not just that it shows that he isn't a powergamer(it does that too), but that it showed that he cared enough about his army to take the time and make a model to justify what he had, and not just slap something together, but put pride and effort into it.  It was only one model but it was enough to make THE difference.  Orks and Necrons may be a good combo, but he at least used modeling and proxying to justify the crunch of his army with the fluff.

And I think we all like that, and we should.  Because that takes far more effort than to just buy a few awesome units and throw them into your army list because they are new and powerful and hooray! allies!  I love allies over all and even though there are the list I hate for their non fluffyness, thats ok I can't stop that and all I can do is beat them, and show them that fluffy is better :).

In my opinion, IG is hands down the best ally, mainly because of the platoon structure.  I can take two IG platoons and still have 200 models on the board, and then my primary detachment.  Also since they are middle of the road stats wise, they make great allies in that regard as well.  They aren't horrible in cc, though not great, and are decent shooters(individually).  So making some chapter serfs and auxilia for your space marine chapter is a clear chioce.  Guel'a auxiliaries for Tau, another easy choice.  Rouge Trader mercenaries, ork grots, chaos cultists and traitors, merc pirates, the list goes on.  The IG have a great army that has flexibility and great crunch, there is nothing wrong with that.  And they are so flexible in being able to ally with so many that any army can find a way to fit them in without letting the fluff bunny die inside of them.  Its all how you want to make it and if it inspires you to make some awesome models, then go for it.

IG are great allies and a wonderful blank slate from a modeling perspective.  When choosing allies, you need to always consider what your army lacks and what that ally can bring that is points effective and can fill that weakness.  Its great if they have the best psyker in the game, but if he costs so much that you have to sacrifice key units, then in the end you are still losing out.  IG are great because they are cheap and really don't hurt from the allies force org, as you can still bring 3 leman russes if you wanted to.  So if you are thinking about how to add to your army then I would seriously consider IG, even if you plan on just making your own model and counting them as IG.  That is ok, and if you're IG and looking for an ally but the fluff bunny won't let you, do up some great models that you are ok with and just make sure your opponents understand exactly what they are playing against.  Most everyone is cool with that.  If you are a tournament player, well you may have to get the real models depending on TO, sorry, but you can use those only at the tournaments and your sweet models for regular games.  Or just bring up anyways and see what happens, if they look sweet most times you'll be ok.

Hope everyone had a great week and I will be posting up more shortly.  Time to get my inquisitor put together and painted.