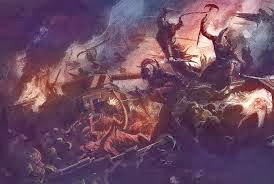 Alright as many are aware, the eldar are up at the top right now.  They can bring some great units to the field and when combined with their special rules and psychic powers, can be very powerful.  Fear not though, the IG still has the tools to take this army apart and there are some strong units that can counter what the eldar bring to the table.  Also what is key is understanding how the army functions and what to target to remove their force multipliers.  The eldar continue the trend of synergy that 6th has brought about and they are no different from Tau, Deamons, CSM, and DA.  Once you take apart their force multipliers, they become just a regular non MEQ army with ok shooting.

So Wave Serpents, I know these guys are the nemesis that most find hard to overcome.  They have a great cover save and can put a tremendous amount of firepower out and carry a unit.  Don't fret though, they are hardly unkillable and you have many options to remove them.  First you have the obvious choice in the Hydra, it is dirt cheap and not only does it have skyfire, but skimmers and bikes cannot claim their cover save, which is huge against Wave Serpents.  Bringing a few of these will be more than capable of bringing the wave serpents down and have the greater effect of forcing your opponent to play cautiously or risk losing his wave serpents.  The other good news is that the Hydra is great at targeting all of the eldar's vehicles and even the jetbikes.  The Heavy bolter can still fire regularly and with the autocannons being twin linked, you are going to get a few hits with those as well.  With all the flyers that are currently in the game, they certainly have other uses as well.  If you are worried about an alpha strike and don't have good terrain to hide behind to survive your opponents first turn, keep them in reserve, its a risk but you have ways to increase chances of reserves coming on.

The other way to deal with wave serpents is with orders.  Now you may think I am talking about bring it down, and I know the twin linked is nice.  But against wave serpents, you really need to get every hit to count.  The order that is very effective is Fire on My Target, making your opponent roll SUCCESSFUL cover saves, not all.  So they have two chances to fail, granted it may not seem like much, but when it comes to having that melta or lascannon shot making it through, having two chances to get through that cover save is a huge deal against all the eldar vehicles.  The more dice your opponent has to roll to survive, the better chances you have.

The last way to deal with wave serpents (and other vehicles) is in assault, get in there and throw a bunch of krak grenades and watch it die.  The hard part of this is actually getting there.  Wave Serpents can just dance around you.  Vendetta/Valks are the best way around that, fly on and drop a bunch of guys around them and give them very few options of escape, you will have to survive the drop but once you are there they have to react to you, and the best way to play is with your opponent reacting to you, not the other way around.

A good way to really help you with getting rid of wave serpents is by luring them into lowering their shields.  How do you do this, well this requires good positioning and good cover, either a ruin or aegis is preferable.  This unit should be threat so preferably it has an anti tank weapon.  Its in a good position to threaten your opponent and you make it so he has to deal with it.  Then when his first one shoots at them, go to ground.  This works great behind an aegis, as you can survive all his normal shooting quite easily, but then he will use his shield to get around that 2+ save.  If you have vets with carapace this works even better, you will survive a good portion of the shields wounds but he will have to continue focusing fire on them and having to use the shields to get around the cover save.  Most likely he will kill the squad after 3+ serpents shooting, but now all those serpents are open to sweet lascannon death.  Then you fire on my target and make him roll lots of cover saves,  you will get through and many wave serpents will be dead.  Granted this is not the easiest tactic to pull off every time, but in the end guardsmen are expendable.

Now the big part of the eldar army is their psychic support, with their farseers and warlocks.  They have great powers and really bring the eldar army up a big notch.  They are however not the toughest guys in the neighborhood and if you can pin them down, they won't last long.  The best way is to use barrage weapons on them.  Mortars are great for sniping, land a lot of wounds right on top of the farseer and he will fail look out sirs and his save is nothing to be too proud about.  The Colossus is prop the best as its S6 AP3 ignores cover is just mean and will wipe some eldar out very easily.  Other barrage weapons are good too, but its the ignores cover that makes this so effective, plus it will double out the farseer if he is on foot, insta killing him.  I love taking my MoO and he can be issued orders like fire on my target, and if their is a vehicle or MC nearby, using bring it down is another great way get a hit on the farseer.  If you want to read more tactics on using the MoO visit the following: Master of Ordnance Tactics.

The eldar have mobility and psychic support as their lynchpins.  Take those away and they will be left in the open with little recourse but to die, if you can pin them down, they die easily enough.  Eldar do not have the numbers to play the attrition game.  Warp spiders are a great unit and should always be on the top of your list to remove.  They can kill almost anything and have a 3+ save.  Since a good eldar player will hit you and then run away, you will most likely not have LoS.  Fear not, barrage is here to save you, drop those pie plates on them, if you have a colossus, again these guys are great at that.  Basilisks are great and the MoO can do the job in a pinch, though I tend to prefer not using him on targets out of LoS as he really can miss by a lot.  Mortars will do good, as even though they will get a save, make them roll enough dice and they will lose some, and all they have to do is lose one for a pinning check.  A pinned warpspider is pretty useless.

Now when it comes to the myriad of wraith units, well lascannons are a good friend of the guardsmen in this matter, as well as plasma guns and meltas.  And you can always use the same theory against them as against termies, make them roll dice.  Lasguns can wound wraithguard and force them to make enough saves to whittle them down.  The big boys, well as said before, lascannons and meltas can still wreck these guys.  Leman russ vanquishers with a lascannon a multi meltas can also bring a lot of pain against a wraithknight, and a pair of them can really wreck their day.  Vendettas are also another great option in this regard.  In the end, most of the time your opponents key units will not be these, so target them only when necessary, kill their key units first and the wraith knight will die on its own with none of the other eldar to support it.    It can move fast though and if your opponent is feeling aggressive, watch out, it may be worthwhile to remove it early to simply remove the threat of it in CC esp is you have a lot of vulnerable vehicles.

The eldar are stronger then ever, but they are still a glass hammer.  Their army teeters on the edge of synergy, and when it loses it falls apart and falls apart fast.  Destroy their psychic support and mobility.  Once you pin them, take them apart a piece at a time, mass your fire on a small part of the eldar army and then move on.  If they cannot support each other, the eldar army fractures and loses the ability to respond the threats.  Get them to play the attrition game, you can win that, and they cannot hope to compete.

Now on using blob squads against them.  I personally don't like taking max sized blobs anyways, but if you normally do, break them into 20 man blobs or no blobs ata ll instead of 50, you will still have the same models, but now they will have double or more the number of units that they will have to shoot at.  The amount of shooting the eldar can do is stupendous, don't concentrate your units into one nice target to all die in one round of shooting.  Keep the seperate to where they can only kill a few at a time.  Then you are playing the attrition game and it is truly hard to lose that one.

Anyways I hope you find this helpful, and by no means think that guard are out of the fight.  As always if you have tactics and tips that you have used successfully, please add them to the discussion. Also feel free to read my other Tactics articles: Tactica