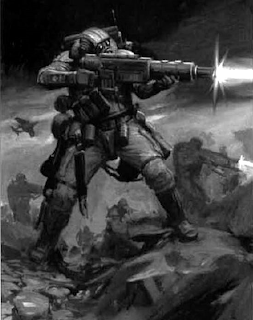 Ok so today I want to talk about one of my favorite units in the Imperial Guard, though they are not my favorite on the tabletop despite my desires.  That unit is the ole glory boys, the big toy soldiers, the Storm Troopers (Kasr Kin if you are Cadian).  I love the fluff of these guys, the orphans of the Imperium's wars and selected for a life of service in the elite shock troops of the Imperial Guard, given the best training and equipment the Departmento Munitorum can offer.  Sadly they don't perform so well on the table and I will talk more about that later.  I really want to talk about their fluffyness and the armies I would like to see them in.  The release of the Inquisition codex has also gotten me in a Storm Trooper mood, as I love the look of the Inq STs and have really wanted to do a Inq ST army for a while.  Unfortunately the rules to now have not made that easy.

But the new Inq codex makes this a lot easier to do this, allied with IG.  Will this be the most competitive list, no not really.  You load up on henchmen and even with carapace and hot shots, they are still cheaper than IG STs.  They are not the same but you can model them up to look the same and if you take Jokaero you can possibly get them better weapons and an inquisitor can prescience them to make up for the lack of BS.  I really want to do some counts as and mock up some cool looking mechanicus dudes to replace the Jokaero, basically some sort of mechanicus weapon smith or something, would use the same rules for Jokaero, I just don't like the monkeys.  Anyways getting off topic.  I really want to make a Storm Trooper themed army, and if they get a proper update in the next codex this may become a serious possibility.

Part of what has endeared me to these guys is their fluff.  For me, the first thing that I read about them, and is part of what got me into IG way back when, was a short story in a white dwarf about the war for armageddon.  In it was a story about a squad of storm troopers, scaling a cliff with grav chutes into an ork encampment.  It was some sort of major ork supply depot and command point.  These guys are floating down the cliff, right into the ork base unnoticed and as they are just about to hit the ground the orks notice them.  But its too late and the hellguns(that's what they were back then) start crispin up the orks, the squad leader puts his foot through an ork, deactivating his grav chute and dropping right on the orks face.  They fan out and blast apart the orks and lay charges, general mayhem follows with orks a burnin.  They take minor wounds and kill a crap load of orks and wreck their shit, then extracting to go to their next mission.  Yep that's bad ass and ever since then that's how I see those guys.

Unfortunately they really haven't measured up to that, don't get me wrong, they are by no means bad, just not as good as I want them to be.  They actually have good rules, their special operations rules give them  a nice edge.  What hurts is the hotshot lasguns are not as good in 6th as in 5th, needing to be 9" to get in rapid fire.  Their big hindrance though is the points cost, they are more than a damn space marine now.  That is a major issue as in no way do they stand up to space marines and MEQ, they are better than regular guardsmen, but when it comes to choosing between storm troopers and veterans with grenadiers, its not much of a choice since you are losing only a situational benifit and hotshot lasguns(whooptie doo).

That being said they have some uses as a MSU squad and 2 special weapons, especially with meltas.  With infiltrate and pinning, they can actually get into a good position turn 1 to either neutralize a unit through pinning, or get a good position for a shot on armor.  I feel this is more useful than their deepstrike one as the greater increase of interceptor makes is hard for them to survive the drop.  The way to use it is in valk/vend and grav chute insert them, and get the re roll since they count as deepstriking.  Scouts is the other good one as it really shines with Chimera's or valk/vend, the former to move in to a good position, and the latter for outflanking.  You can do this with Chimera's but I think if you are going that route and are already bringing vendetta's most likely, storm troopers synergize real well with them and then you can save creed's scout for another unit.  You can give cheat scout to a few units since the embarked unit confers it to the transport, one squad of storm troopers will give a whole squadron of vendettas or valkyries scout, some food for thought.

Kitted out they can make a decent assault unit as well, as they have 2 attacks and a pistol and cc weapon.  Granted hotshot pistols blow and you will need to get close, but if you have two flamers you can have a decent unit that can assault and clear an objective for you and your guardsmen to follow and secure it.  They are still a suicide squad, but they can do it and importantly draw fire and CC from your guardsmen that are going to be securing your objectives.

That is where these guys still work well, as a suicide squad that provides the distraction and punch to keep your opponent off edge for a turn so you can take the objectives and keep the important squads alive.  They can make a good tank killer, jumping in from vendettas or deepstrike and getting a rear shot with meltas.  Hey wave serpents causing you trouble, there you go, a couple five man squads with meltas are cost effective enough that you can still have plenty of room elsewhere.  The key to bringing these guys is you have to really build them into your list and either build your army around them, or them around your army.  They are just that little bit too expensive that you can't just throw them in there and call it a day.  You are going to really have to balance them in your list and in the end accept that they are no where near as durable as you want them to be.

I really am hopeful for the new codex that they will bring the storm troopers up a notch, also seeing that some of the stronger units have been nerfed in newer codex's and other units strengthened, I see veterans taking a minor nerf, most likely say goodbye to 3 special weapons, they will hopefully make STs a truly elite unit.  And that is really what they seem to be missing right now, they just don't feel that bad ass, especially when they are compared to veterans, they only have a situationally useful weapon and special rules.  Granted I like their special rules, but they just don't play like they are awesome special forces with the best gear the IG has to offer.  Hopefully they will get access to lots of toys, special grenades, auspex, maybe some update to the old targeters, special wargear.  They need a serious points reduction, they are not worth more than a space marine.  Other than that we will see.  I am hopeful, I have loved the models and am very excited to see the new plastic kits and get my hands on 6 of them.

Well this wasn't really a tactics article but they are still a useful if limited unit, and if you have found ways to really make them work, by all means share.

GG
Posted by Grumpy Guardsman at 11:36 AM