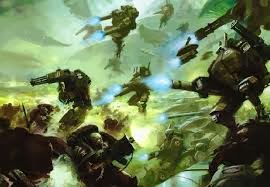 Now don't want the picture to make you think I am hating on Tau, they are just a  good example of some of the things going on in the meta right now.  Now I have recently started listening to lots of different 40k pod casts.  I like hearing the different opinions and subjects they talk about.  However while listening to a few of these I noticed a trend among them.  Firstly they all tend to bemoan the state of the game and the tournament scene, how certain builds are so prevalent among players and tournaments.  Usually its about tau, screamer star, wave serpent spam etc.  Then they also usually talk about what they have been doing in the hobby.  This is where I start to laugh, as these guys who are complaining about those builds, are making them or playing with them themselves.  I just find it funny, and then of course comes the excuse of "well I play in tournaments to win so I have to take it" blah blah blah.  Which in my opinion is an excuse for mental laziness.

Don' get me wrong though, I am not hating on these armies, and I know some long time Tau and Eldar players that are enjoying their rightful due, and nothing is wrong with them playing with a great codex and taking advantage of the strong units within, we all do that, its just annoying when someone else does it.  But I do find it funny when these guys claim to be regular gamers, and yet lo and behold when a new powerful army comes out, what are they building and using, that one.  And don't try and hide behind the hobby aspect of it, oh it looks cool.  Oh really, is that why you have the godforsaken ugly ass model that happens to have awesome rules, cause it "looks cool", BS.  I like the hobby aspect too, and I have a few models from different armies lying around, but I don't jump from power army to power army as they get rules.

If you are a power gamer, then just admit it and be honest about it, you like to win, I like to win, its all good.  If that is what you love about this hobby, then go for it, just don't be a dick about it.  You will ostracize some people and prob not be the most popular kid at the table, but that's just how it goes.  I try not to hate on someone that likes to win, as long as your honest about it.  You try and feed me bullshit and that is a different story.  I personally don't think of myself as a power gamer, but I do like winning too, so I understand the feeling.  However I love my IG too much to start new armies based on what their rules are.  Plus I have a wife that would not be happy if I started 3 new armies all of a sudden.

Now some people do wait for new rules to be released before starting a new army, as the previous are really crappy and they don't have enough money to just dump it all on a losing horse.  That is fine too, I know many people who like the fluff of some armies, but just can't get past the point that the army kinda sucks, or is very restrictive in what it can do.  Sometimes you just have to wait and hope something good comes out down the road.

I am happy when good codex's are released, even if does make it harder to win.  Having one or two top armies and the rest fighting for the bottom is not good for the hobby.  Having good codex's makes this hobby better, no one likes their army being the punching bag for the others.  I like to complain about things from time to time, but overall a good codex is a plus, not a minus.

What I found so funny about the pod casts is this lack of honesty with themselves, on one hand complaining about how this are, and on the other willingly going along with it.  I really don't see how you can be opposed to something if you readily embrace it.  Just admit you like it and move on.  In the end this should be about having fun and getting some good games in and sharing the hobby.  The negative attitude that seems to pervade is not helpful to this.  In the end you are responsible for the state of your game, your attitude and what you do affects how you play and whether or not you enjoy it, and if you are having fun and are positive, other will start to be too.  Its just how it works, we are communal creatures, and if others are happy, we tend to feel the same as well.

In the end, just be honest, if all you care about is winning, then go for it and just be good opponent.  If all you care about is the fluff then geek out over it and leave the rules complaints alone.  If you like hobbying and couldn't care less about getting a game in, then paint beautiful models and show them off to make people envious.  We all come into this hobby with different intents and desires, and give as much as we take from it.  The goal is to have a good time and hopefully give someone else a new perspective as well as getting some of theirs.

Hopefully this wasn't too boring, but I feel this is something that can too often be missing from the 40k community.

Hope everyone is having a good week, half way there.

GG
Posted by Grumpy Guardsman at 9:44 AM