Imperial Guard Rumors: what they mean 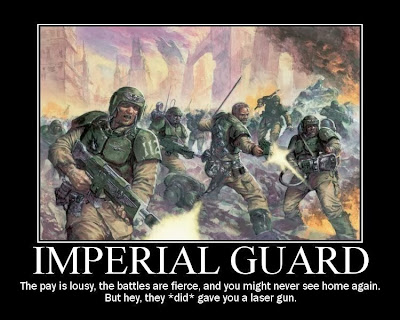 Alright, there are some New IG rumors from Naftka that look very good, and also some I'm not so excited about.  Now most you are probably coming from faeit so I'm not going to just repeat what he said in the rumors.  The basic rundown is that new artillery kit with all missing artillery tanks, new tank kit (heresy era), plastic stormtroopers and veteran kits, maybe new heavy weapons kit as well.  As far as the rules and army itself, HQ is rumored to be changing drastically, losing multiple options and having to start with  Command Squad, then you can replace commander with commissar, psyker can be bought as additional adviser.  New rule mission objectives, some sort of special order that sgts can issue, most likely something along the lines of Sgt Bastone in the current dex.  Priests getting new rules to help them out. Same for techpriests.  Vendetta/valkyrie getting put into one unit, points increase and maybe losing squadron rules.

So that is the quick rundown of the rumors, if you want more details of the rumors go to the link.  Now what do I think about this?  Well first off the new kits make me so happy, finally going to be getting my griffons!!!  Stormtroopers in plastic, even better!!  Veteran kits, is it Christmas?!!  In short, I'm fucking ecstatic about the new kits.  The heresy kit could be awesome as long as its not a super-heavy, those need to stay in apoc where they belong.

Now to the actual rule and army changes.  First off the HQ changes.  This is one I am actually bummed about.  I don't like losing all the HQ choices and having them thrown all into one slot. First so GW has been doing the opposite and if anything adding more HQ choices to armies in 6th.  So I have some serious salt on this rumor and is one I hope is not true.  Having the option of a cheap HQ choice that is one model and can go attach to any squad is a great one, I really don't want to lose it.  If it happens then I will be sad but hopefully they will at least make some benefits from it.  The other changes to the HQ section look good, priests need a little tweaking so the updates to the buffs they provide is serious good news, plus they need a points reduction as 45 points is way too much for what they provide.   Now I love the techpriest may be getting specialized equipment and can be attached to different units.  They may lose the HQ slot they are in but thats ok, though I hope they don't take up a heavy Force org slot as that could really hurt in an armor heavy army.   Overall there is good and bad for the HQ section.  The CCS becoming the only HQ choice beyond SC does not make me happy but I'm hoping this rumor isn't accurate.  The other rumors are looking good though, as the Techpriest and priest needed some changes too them.

For the special rule that affects Sgts, I've heard something like this for a while, basically being that Sgts can issue limited orders, similar to Bastone, but that he will not be in the next codex.  Basically you lose him, but all sgts can get a limited version of his orders.  These will prob be a one time use order for sgts, especially the way GW has been going with the one time use abilities in the recent dex's make this more likely.  Which I really like, this is a great option, especially if you have lone squads out there that are out of range of orders, speaking of which I really hope the change vox's to allow orders to be taken outside of range, instead of rerolls, as that makes sense.

Valk's getting rolled into one unit is actually a good thing, as the options that the separate units have can be used together now and also being able to mix and match in squadrons.  This is good as there was really no reason for them to be separate units before.  Points increase was not surprise.  They may lose squadrons, but I seriously doubt that.  Overall nothing unexpected and this could be a really good thing with them becoming one unit.

So  I have mixed feelings, on one hand the new kits are a god send and I may finally be able to get shotguns without going to FW or scouts.  On the other, losing HQ options suck.  I don't like losing that flexibility.  Now if they make an option for an HQ tank or something, this could be ok, but I really don't like having all the HQ choices smashed into the CCS.  Now priests might become useful again, they need some changes.  I really like them fluff wise, and they could be great with an eviscerator in a blob, have so many others to accept challenges and have him as the heavy hitter, with a commissar to hold them steady and you can have a nasty CC unit that won't break and can punch for days.  I really like this.  Techpriest getting specialization is awesome and I may see them used outside of Mech and Armor lists.  They aren't bad right now, just not great either.

Vet squads are the other nice thing.  I love the fact that they may start at 5 now and can be upgraded to 10 if you want, and other wise can keep them small if you want.  They may be taking a more specialized role in the army, which is a great thing.  Hopefully doctrines will be cheaper for them.  Either way vets are going to good in the next codex as they currently are now.  Really looking forward to them and i see some good combos in the future with them and techpriests.

Overall not bad, other than the CCS becoming the only HQ choice, everything else is looking good and some unused units may be seeing a comeback, though I am hoping for a new priest model.  As most of them currently suck.

GG
Posted by Grumpy Guardsman at 10:53 AM