New Inquisition, The Imperial Guard, and You 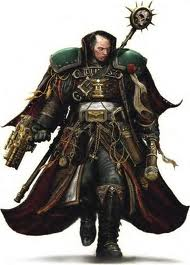 Greetings to all and I hope your week is going well.  Mine is and part of it is because I am a little bit excited about the inquisition codex set to be released this weekend.   I have always wanted to do an inquisitorial army but I am more of an Ordo Xenos guy and the Grey Knights and previous codex's focused too much on killing deamons for my taste. But with this supplement/codex I may finally be able to do my alien hunters.  Now if you are a guard player, you really should be excited about this, as if what the rumors are true, or even close to being true, then there is a lot of gooddies to be had.

First off you can get an inquisitor and have access to a good psyker, the primaris isn't bad but he is def on the lower end of the psyker spectrum.  Hopefully divination will be available to inquisitors, but if not I won't mind too bad, the other powers in the book are good as well and I am far more excited about mastery level two or higher.  Having a psyker that can buff a unit and attack as well, or just simply have multiple powers he can use will make a huge difference.  I know DA libbies and SW rune priests are popular and for good reason, but in most cases that is all you really want, where you still have to spend points on a troops choice to bring them.  Sure they can be good, but to get what you want you are spending more than you need to.  Now who knows what inquisitors will end up being, but it is reasonable to assume that they will be near to lower the cost of what a libby and rune priest will be.

The other reason that they will be great for guard is that their retinue will not conflict with your guard army, and will be cheap.  Now I am assuming a lot, but that is going from the henchmen and inquisition part of the grey knight codex, where a lot of these units will be moving from.  A warrior acolyte is only 4 pts, then you can give him a bolter and carapace armor for 6, wow, talk about a cheap durable unit with good firepower.  If the section stays similar to what it is in the GK codex, then this will really be good.  The great part being you don't have to take coteaz to bring them.

Then their is the possibility of assassins, which I am really hoping for.  I love the assassins and espcially the vindicare.  If they are all included, then this will really take this book to the next level and make it even more of a take for guard.  I'm sure I'm not the only one who feels that the IG elites section is lackluster.  This new book could fix that, with assassins being able to fill the gaps you are missing either in CC or in precision shooting.  Now this may not end up being the case, but it is supposed to be a standalone codex so I would assume it has the options built in to allow it to stand on its own, including the elites.

Where this could get interesting is in what else they will be able to bring to the table.  I'm really hoping for cool options that bring out the flavor of different Ordos.  Special Xenos hunter equipment, anti psyker, anti choas stuff.  This could be an amazing codex with great flexibility and fluff, I am hoping for the best.

Why this could be great for the guard is the access to good psykers and psychic defenses for good points and without having to pay the troops tax for him in comparison.  You can take just the inquisitor, at least thats what is rumored.  Then if you want to take some cool units to fill some gaps you can.  This is great from a competetive and fluff stand point.  I love the idea of an inquisitorial army, with seconded imperial guard and inquisitorial storm troopers, and really look forward to doing this.  Also though it adds the possiblity of a very good psyker if you want it and also some really good units.

I can't wait to see what this will bring and what it can change in my army.