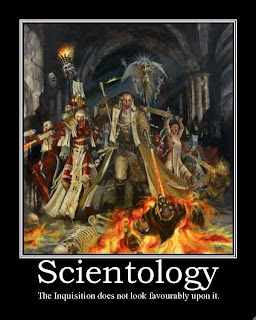 So I have had a good start to my hobby weekend.  I got a few tanks repainted from my old paint scheme into my new one.  Getting my armored IG regiment ready to fight is no small task, but hopefully by next week it will be all painted and ready for battle.  Hoping for a game tomorrow, but I also have death watch to look forward too, so either way I'm getting some juicy 40K in.  Also I updated the Counter Drop Pod Tactics post, added demonstration photos and a few other things, check it out along with my other tactics articles.

The meat of this is that Inquisition was released a short while ago, and to be honest I am a little underwhelmed.  I was really hoping for more than just henchmen and an inquisitor.  But this does not mean it is horrible. The force org rules make up for the lack of other options.  You can have your normal detachment, allied, and then an inquisitor on top of that, who can be your warlord if you want.  They are cheap base cost, so that is a big plus in that you don't have to spend a lot of points on them, and if you are looking for a psyker, they still end up being not only cheaper than a primaris, but are also better.  Not as good as I would like but saving those few points means more power weapons and krak grenades on your infantry.

Now the henchmen are no real different from the GK codex, so you have all the goodies that they bring now, with out having to bring coteaz or actual grey knights to unlock them.  This is not a bad thing, as you can also take every Imperial dedicated transport except a land speeder storm(sad face), so you could kit out some ISTs with a land raider if you wanted to.

Overall I feel that this could be ok, but I feel like paying a little much to basically get a copy of two pages out of the Grey Knight codex.  Now you can get a cheaper psyker, and can make some cool fluffy combos.  I just wish there was more.  As IG, I don't know if it adds quite enough to make it a worth while ally.  The nice thing is that it doesn't prevent you from having another, and doesn't have to be too points intensive, so it can be a very effective low cost buff for your army.

I will do a more in depth review after I have had a greater chance to look it over and it is not so late.  Right now, I would say meh, not bad, not great.

GG
Posted by Grumpy Guardsman at 1:06 AM