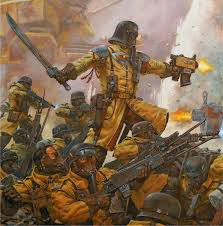 Latest and greatest from the rumor mill is that the Steel Legion and Mordian Iron Guard will be receiving plastic kits come the new release.  Now I can see the steel legion but the mordians are little out of left field, but I know they have their fans.  I can see this coming to place as steel legion have always been popular and wouldn't need too much to get a plastic kit going for them.  A new infantry squad and an upgrade sprue would be enough for you to get an army going, same for the mordians.  The IG are really hard for GW since they have so many different regiments, and unlike space marines they look drastically different from one to the next.

Granted these are nothing new when it comes to rumors, but I find it hard to believe that the IG are just getting a ST/Veteran kit plus weapon kit.  Expanding their plastic line would be nice and I know with the success of Death Korps on FW, steel legion would be a great addition.  Now the important part of this is what will this mean in regards to the rules.

Well with the latest releases, the redone models have also seen significantly updated rules and or supplements.  Iyanden springs to mind as the best example, Farsight is another.  Now what this could mean for IG is that the fabled doctrine system may be returning in the form of supplements and a new system for the main codex.  I see this as likely as the latest kits have been followed nearly all the time with new rules.  This could mean a very large opening up of the IG codex in terms of flavor and army style.

I am really hoping for a regimental doctrine system, done right it could be a huge change and bring some good diversity and play style back into the guard, as the new SM codex has done for them.  The real question is how much of these rumors are true and if so, how will they affect the new release.  I see the Steel Legion as a high probability and mordian's less so, its a nice wish but that is a lot for GW to add with only so much returns.  Think how much stock of basic guard squads they have to have, thats 4 different kits for the same IG squad, at some point they stop making money with all the different armies.  What I see is the Vostroyans disappearing and the Steel Legion replacing the third regiment in plastic.  I find it hard to believe that they will do more than that.

Hopefully this means updated doctrines to support the different regiments, but only time will tell.  I am def keeping my ear to the ground about this one though.


Posted by Grumpy Guardsman at 4:36 PM