Hobby Progress and Thoughts on Allies 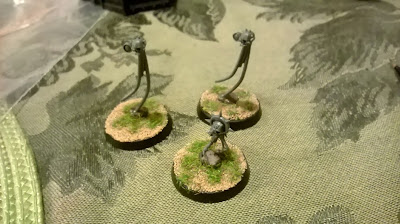 Well it has been a busy week so far, unfortunately did not get any games in, my buddy had work issues and by that time I was geeking out too much over the Inquisition and how to ally with my IG army to really get in a gaming mood.  I did get a bit of hobby stuff done and as you can see above, I have some servo skulls ready to be painted and added to the army.  I have my inquisitor and all the bits I want on order and can't wait, I am hoping to have them all ready for a game this weekend, but at least I will have models, if not painted.  I really am getting more excited about inquisition the more I read and think about it.  It is such a godsend to IG and in my opinion puts IG back at the top table (though we really didn't leave, just have been sharing it lately IMO).  You can build in CC units, anti-psyker and anti-daemon defenses, awesome weapons and gear (psychotroke grenades :)) and are only limited by the points you want to spend, and the great thing is you don't have to, for less than a primaris psyker you get three servo skulls and prescience, that is really huge.  Anyways on to other hobby stuff

More has also been continuing work on the SOul drinkers army.  I got Sarpedon finished and handed off to my brother for painting.  Was a bit of a pain getting all the legs to fit in and getting all the different bits.  Ended up using scything talons from warriors for the legs, sanguinary guard power axe (axe of merceano), and random SM bits for the rest of him.  I love the new tactical kit btw, it has so many pieces and is so detailed, awesome! 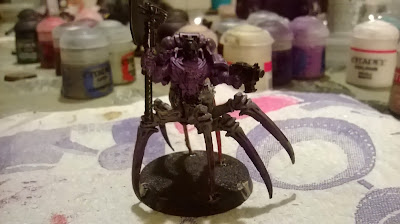 Also finished up a champion and vet sarge.  Also have the librarian Tyrendian, he's the one that shoots lighting, real lighting!  The others are assembled and in line for painting.  Sarpedon is the current project so they will be waiting a little bit.  Apothecary Pallas is also in the wing to, this army is going to take a while *Sigh*.  At least my brother is doing a big part of the painting, he is far better at detail work than I am. 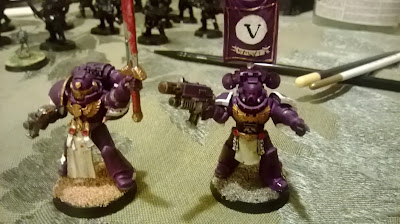 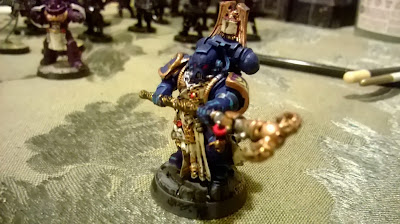 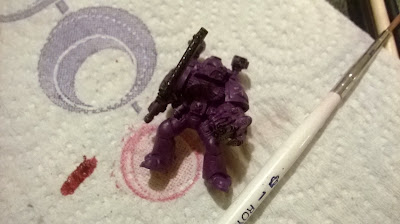 Now I have not been idle with my favorite guardsmen.  I recently stripped my old kasrkin to repaint them, got around to getting an initial spray on them.  I was also able to get through a bunch of my old vehicles and repaint them, I changed my color scheme back to just green for the vehicles, the brown and green just didn't look as good and they really are crisper and look a lot better.  Plus two of my chimera's are ten years old and the paint job shows that.  Oh how you learn with time. 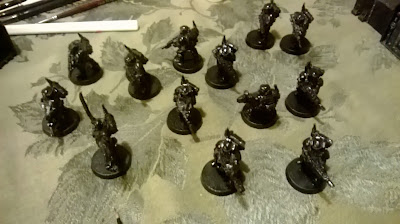 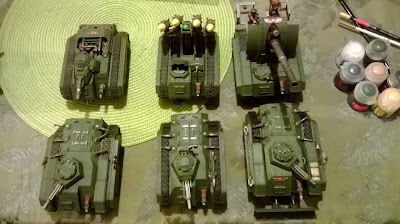 A lot has gotten done, but I still have to finish painting the storm troopers and I have a bastion and all the guns for it to paint.  But I have made a huge dent in the army right now.  That will change when my inquisitor arrives.  But thats how this hobby is, nothing is every truly done.  Thats ok, I am always in need of something to do.

Now I talked about the inquisition as allies earlier, and though I will try not to beat a dead horse, I will a little more.  IMO if you are guard and want allies, your first choice should be inquisition.  The synergy is has is just great.  You have access to the skulls which have a huge impact with all the templates IG throws around.  You have a cheap divination psyker(though thats not the only way to use him) and access to lots of toys that the IG can't normally take.  Now you have solid answers to counter the eldar pyskers and daemons, both of which are powerful.  Plus the Ordos Xenos is now at your disposal for helping to crush the upstart Tau.

Now there are other great options for IG allies and one of my fav is Space Wolves, not only is it a fluffy combo, but it is still one of the most effective ways you can combine armies.  The Rune Priest is hands down one of the most feared psykers on the field and he should be.  I know many take him for divination, but with Inq allies now, you can ge that for cheap.  What he is great for is denying enemy pyskers on a 4+ and all the other awesome powers (Jaws of the World Wolf!!!).  If you are thinking about taking the sons of russ, then he is a must have, and kit him out.  Prescience is not the only thing he is good for and now he is just too expensive if that is all you want.  But if you want a monster you can send the emperors enemies to their deaths, he is the one.  Plus SWs are awesome, long fangs and grey hunters and wolf guard, you really can't go wrong.  IG brings the anti air so you don't need to worry about that.  IMO the wolves are your second choice as IG allies, they bring the anti psyker and can dish it out in a fist fight.

Any combinations of those two really are a solid choice and you can hardly go wrong.  I will do more on allies later, prob next week do an allies week and take an in depth look at each.  For now though that is what  I think.

Can't wait to use my servo skulls and MoOs together :)!