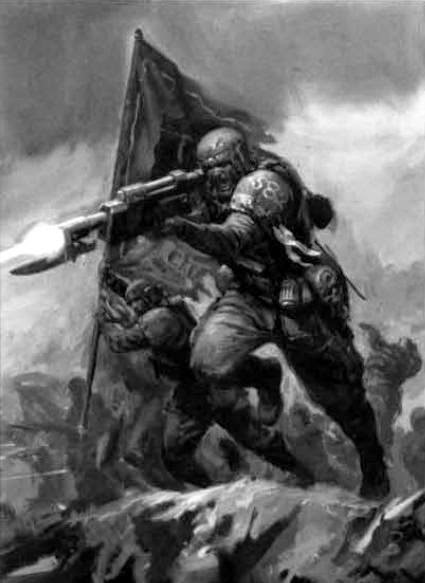 With 7th coming and the new changes, the Imperial guard are going to be getting a boost in one area and that is our troops.  Already we have some of the best in the game and IMO the most flexible, and 7th is going to make them more solid than ever.  Now I will focus on confirmed changes but will discuss some of the possibilities as well.

The big one is the Battle Forged bonus with objective secured.  The imperial guard is one of the troop heaviest armies out there and is going to benefit quite a bit from Objective Secured.  Only a few other armies will bring the number of troops to counter this and even then the IG have the upper hand in many cases.  So with OS our troops will be contestable unless another troop with the same rule shows up.  With the access to a number of fearless and pseudo fearless (commissars) units, IG troops will be holding the line and objectives till the bitter end.

The big winner is going to be the combined/blob squads, multiples of these can hold onto objectives and unless another troop unit comes along, it will be yours till they are gone.  With the firepower available to the Imperial Guard, it is not going to be much of an issue to target your opponents troops so you can keep your own objectives secure.

Another army that is going to benefit is the mech one, with vehicles getting a boost, they are going to be harder to one shot, though still able to be glanced to death is something to watch out for.  A mass of chimeras and vets moving up the field, eliminating troops and then taking objectives will work quite well under 7th, its a decent tactic now and will get better.

Now an interesting rumor, as I have yet to see a confirmed pic of the rule or mention in WD(post link if you have), is that overwatch/snap shots are only -2BS instead of always at BS 1.  Now standard infantry won't see much of  a difference but veterans are going to benefit greatly and plasma vet squads will be doing a lot more damage with their overwatch.  I have yet to see this confirmed so it may not be the case, but things are pointing strongly towards it.

Another interesting thing is that charging through terrain is a -2 to charge distance.  What is not confirmed is that charge is still random.  If it still is and is a -2 on top of that, this could be an unintended nerf to assault.  Now I'm not a math hammer guy so someone would have to look at what the odds are with 2d6 -2 or 3d6 and take away the highest as it is currently.  In my experience I see the -2 being worse than the current mechanic, but I certainly could be wrong in this.

Without more info on how the assault phase has changed, only time will tell how this will affect assault overall.  I do see certain units being much harder to assault now though, mainly veterans and scions, both being BS4 and having access to good weapons to have a much higher chance of killing models that are about to assault them, thus increasing their survivability against assault, coupled with terrain, these units will be harder to dig out than before.

7th edition is going to reward you for taking troops, but not penalize you for taking minimal amounts.  With most units able to score, you will have to weigh how important it is to make use of the Objective Secured rule, which in my opinion is something you should.  Having access to great troops and support units to buff them and great orders, IG troops are going to benefit quite a bit from the new edition and should not be left home.

Really looking forward to seeing more info and I hope that there are some boosts to assault to balance the power of shooting.